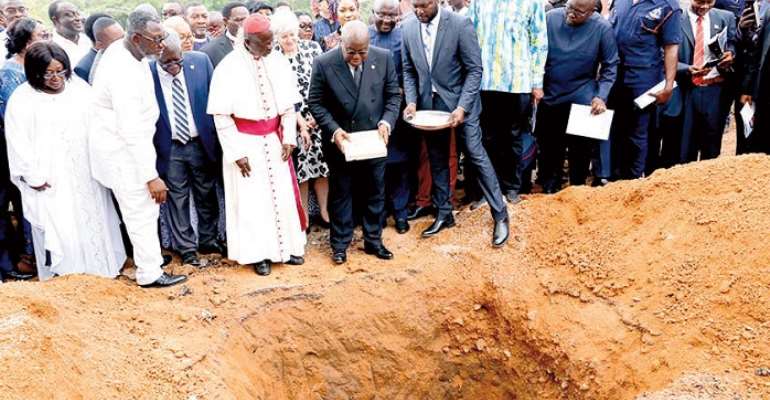 Misplaced priority has been a force to reckon with. Any father who buys the latest model of Land cruiser without paying his wards' school fees can't be viewed as a visionary father. As a country, we hide behind God, religion and exploit the citizens all in the name of politics and power. Is there any honest politician in Ghana? Siphoning National Capital is done with impunity and the ordinary Ghanaian who can't possibly cater for his kids ends up facing additional burdens owing to the incessant taxation. Churches are found in every corner of this country to the point where some schools are classrooms during the day and churches in the night yet corruption reigns supreme. Truth is Ghana is sitting on a time bomb and it is imperative that leaders do the needful.

Watching excerpt of Fix the nation demonstration, I had different perspective altogether. A United front for justice. This is because it was devoid of the usual NPP or NDC. Building a cathedral is good but is it expedient considering the numerous unemployed youth in the country? Couldn’t we have channelled that capital into putting up a factory that could have provided job opportunities? Imagine donating an amount of GHC10, 000 at church whereas your mom hasn’t eaten since morning. The building of the cathedral isn’t necessary at this time where majority of Ghanaians are living in poverty-stricken homes.

In the first place, our problem as a country is bad leadership and corruption. Bad leadership and corruption is deeply rooted and power is often used to teach the opposition a lesson at the expense of putting in proper working conditions, providing social interventions, building schools and putting in mechanism to check corruption in its associated ills. We have some great people in Ghana and Mr. Martin Amidu, Former Special Prosecutor is one of them. A man who stood for the truth and exposed alleged corruption within his own party. However, he never kowtowed to any form of intimidation. How many Martin Amidu's do we have in this country? Like Martin Amidu, anyone who tells the truth will be vilified just to keep you at bay. I believe that truth will always triumph over falsehood.

Another point worth mentioning is that majority of Ghanaians are disappointed in the administration of His Excellency, Nana Addo Dankwa Akufo-Addo. This was a man viewed by the citizenry as a figure to protect the public purse. It is no longer the case as the Special Prosecutor nominee, Mr. Kissi Agyebeng made it explicit that, he cannot stop corruption in this country. Indeed, he can’t and again claiming not making the practice attractive for individuals with an appetite for corruption is one of those lip services. Truth is the corruption we have here is like a glaring tsunami, it is either you quit fighting or die trying. Ahmed Suale should have been here today but this same tsunami consumed him.

It is worthy of note that, our corruption cases will increase immediately we build the National Cathedral. It is quite funny because people assigned to see to the number of cements, sand and iron rods used in a day will inflate the figures for their personal gains. The contracted who is likely to be awarded the contract wouldn’t get the nod if he doesn’t pay his way out. So, you see the corruption will increase and it will defile the sanctity of the subsequent sacrament, AMEN.

Last but not least, I would humbly be quick to hint that, cathedral or no cathedral, corruption cannot be eliminated in the country. The only way to bring it to the barest minimum is to provide more job opportunities, create an enabling environment for citizens to excel in their spheres of their endeavours, choose an independent Chief Justice and Inspector General of Police and make corruption a capital punishment. That way, Ghana could be likened to UK, US, Canada and China. It is that simple. May God open the eyes of our leaders to see that death awaits them one day and that they will account for their stewardship, AMEN.