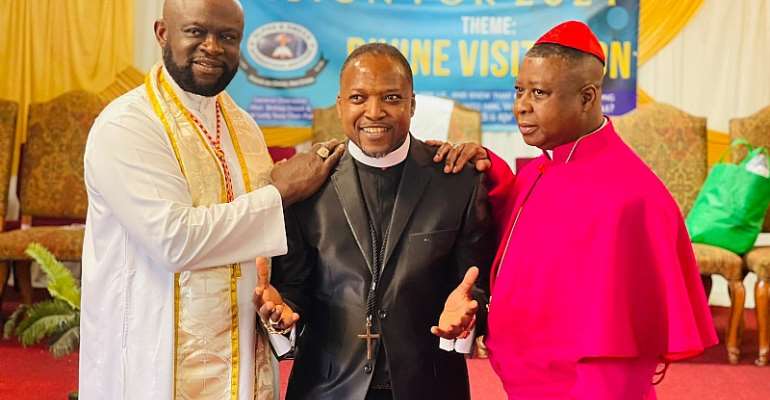 A milestone occurs, one week before his daughter Emmanuella’s 16th birthday and also during the United States Independence Day Weekend on 4th of July celebrations.

It also happened to be one of the most memorable moments for Evangelist Charles Nimmo Ntiamoah-Mensah known as Mr. CNN in Cincinnati, OH. He is the Chief Executive Officer of 3G Media Group and Executive Producer of the mega; 3G Awards Show Celebrations in the United States. Currently also an online televangelist with the Gospel Show; “The CUMIEES SHOW with Evangelist Nimmo on Facebook”.

The brief elevation ceremony occurred at the Church sanctuary on Saturday, July 3rd, 2021, and was conducted by His Eminence, Archbishop Mensah Antwi Boasiako, President of College of Bishops, Shepherd to Shepherd Network of Clergy. The theme of the event was; “Divine Visitation”. He was charged to do the work of God, sharing the gospel of Jesus Christ with humility and focus on the service to mankind.

Evangelist Nimmo Ntiamoah-Mensah is the President of Rosette Multi-Service, Chief Executive Officer of 3G Media Group. A US-based Media Mogul with 20 years of experience in Media and Showbiz. He is an alumnus of Drexel University, Philadelphia, Class of 2000, OKESS Alumnus, Class of 87 respectively. He started as a Photojournalist bringing images from all around the world covering events of Ghanaians Living Abroad on the internet. This was before cell phones had cameras or anyone could take a selfie also in general, the emergence of social media. Among some of the websites showcasing those images were Ghanaweb, modernghana.com , peacefmonline.com , and other popular websites.

These were some of Ghana’s most popular and most viewed news portals in the world. Over those two decades, he covered stories featuring 5 Ghanaian Presidents including former and current; (Presidents; Nana Addo, Mahama, Mills, Kuffour, and Rawlings) and two former Presidents; Bush @ the White Houses and when President Obama visited Ghana. As well as many sports activities, church activities which included; crusades, conferences, planting of churches, ordinations and gospel concerts.

Eventually, he founded his company, 3G Media Group that is becoming famous for its annual 3G Awards events and also its colorful magazine publications; 3G Magazine launched in 2008 and 2009 respectively. Then an online news website; http://www.3gmediausonline.com.now ; www.3gmediausonline.com .

A long-time affiliation with Global Media Alliance and was a Senior Corporate Advisor to the Chairman. He is also the initiator and Co-Founder of the Ghana Chamber of Commerce, USA, Inc. He serves as its Chief Operating Officer, Chairman, and Co-Founder; Dr. Kofi Boateng.

Currently runs a one-stop African Supermarket which also headquartered 3G Media Group in Northeast Philadelphia with his wife; Rosemond. A member of the board; Koora Consult, Counsellor Lutterodt Founder; TADMI and Daughters 3 Foundation. He plans to set up his own charity organization; Evangelist Nimmo Charities focus on these areas; Operation Feed The Homeless, Operation Feed The Children(Orphans and Less Privilege), Operation Save a Kidney and The Koobi Project groom future generations of Photojournalists, Writers, Journalists, Publishers and Event Producers.