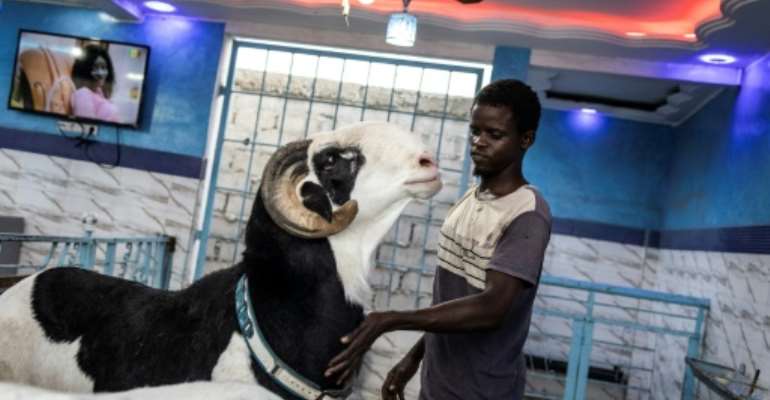 Cobra, a prize-winning ram of the Ladoum breed, is worth many thousands of US dollars to his Senegalese owner. By JOHN WESSELS (AFP)

A ram the size of a small pony tosses its head inside a sumptuous pen illuminated by flashing disco lights, before lunging at some ewes half its size.

The skittish animal lives on a rooftop in Senegal's capital Dakar, alongside a dozen ewes, in an enclosure featuring ceiling fans, faux chandeliers and multicoloured lighting.

The plush surroundings underscore the deep affection owner Abdou Fatah Diop has for the breed of sheep known as Ladoum, which are native to the West African country.

"It's a passion. I forget everything," Diop says of his sheep, adding that he spends more money on them then he does on his family.

But the sheep are still money-spinners. Businessman Diop, 40, sells lambs sired by his prize ram to other Ladoum breeders who want to improve their herds, for the equivalent of thousands.

Many are similarly enamoured with sheep in the mostly Muslim nation of Senegal, where there are popular television programmes dedicated to the animal.

Slaughtering flashy rams for Tabaski has become a marker of status in Senegal, creating pressure to buy a good-looking sheep. By JOHN WESSELS (AFP)

The most prized variety are the Ladoum: a smooth-haired breed with curled horns that can reach imposing heights of 1.2 metres (4 feet) or more at the shoulder.

Senegalese breeders only developed the variety over the past 20 years, according to Diop, to accentuate the sheep's proportions and physical beauty.

Abou Kane, another top breeder, has dozens of Ladoum tethered under a white tent in the centre of Dakar to sell for Tabaski.

"It's an exceptional breed that you can find nowhere else," he says, praising the sheep's "splendour".

Slaughtering flashy rams for Tabaski has become a marker of status in Senegal.

Traders from neighbouring Mali and Mauritania have come to Senegal ahead of Tabaski. By JOHN WESSELS (AFP)

But prices are far out of reach for many in the country, where about 40 percent live on less than $1.90 (1.70 euros) a day, according to the World Bank.

There is still pressure to buy a good-looking sheep, however.

Traders from neighbouring Mali and Mauritania have come ahead of Tabaski to serve the city's clientele.

The market does a roaring trade over the festival period, according to its president Mamadou Talla, clearing about 150,000 euros ($180,000) a day in sales and supplying half of the 260,000 sheep consumed in Dakar.

Talla, 61, said that competing for the nicest sheep is a uniquely Senegalese phenomenon and that customers are picky.

"Every Senegalese wants a big ram" the 61-year-old added, which can "mystify" the neighbours and make children happy.

For the deluxe animals, breeder Abou Kane argued that the rich have a religious obligation to choose the nicest animal.

"God demanded of us a sacrifice," he said. "You really shouldn't choose just anything".

Dakar's largest ruminants' market does a roaring trade over the festival period, supplying half of the 260,000 sheep consumed in the city. By JOHN WESSELS (AFP)

Some argue that the pursuit of beauty in sheep has little to do with Tabaski, however.

El Hadji Mamadou Ndiaye, an imam at Dakar's Great Mosque, said the rules dictate that the sacrificial animal be of a certain age, among other measures, but say nothing of an animal's size or beauty.

Culture, as well as individual vanity, play a role in the market for enormous Tabaski sheep, he suggested.

"If you're not a crackpot, you just follow the criteria that are demanded," Ndiaye said.