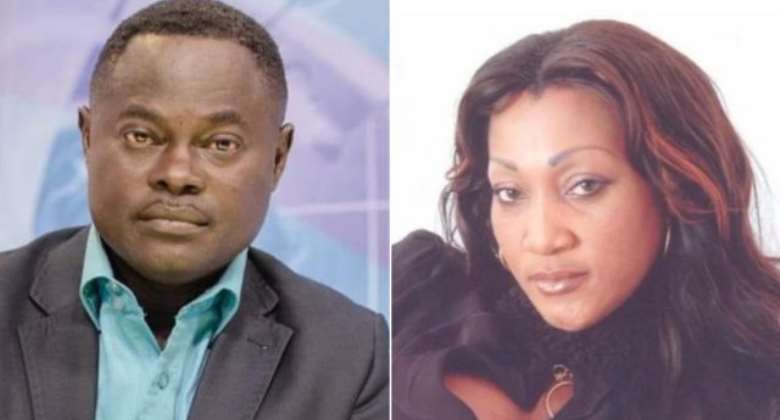 I would earn myself some plaudits if I could align myself to the popular position that Odartey Lamptey, Ghana’s beloved former soccer star, is right in every respect in his family law case. But I must be contrarian as usual to the public pitch and be ostracized as a lone deviant. After all, honor and truthfulness are deeper than any popular applause; and what the multitude usually regard as right and wrong often leads to the deepest abyss.

And upon much cogitation, I draw the reflective conclusion that inasmuch as Odartey Lamptey might not be entirely wicked, he might be profoundly stupid. This is because of the conclusion he formed about children who had not known any father apart from him. He naively decided to allow DNA to determine his fatherhood, ignorantly neglecting the fact that fatherhood has to do more than what a DNA test says.

To wit, once you are appointed a father in a marital context, look no farther: The kids are your children. And if you have a problem with your wife, your status as a father should not be diminished by the tangential results of a DNA test showing that the children belong to another man: Semen is too disgusting to be used to determine fatherhood!

Odartey lived with his wife for years until he took it upon himself to examine his children’s DNA to determine whose DNA his children are carrying. And what was the wisdom in all that? He had no justification for complaining that the children offended him or disrespected him or maligned him. Yet he wickedly decided to use the children as a means to expose his unfaithful wife. He was the only person the children knew as their father since birth. They had nothing to do with the mother’s wrong decision to be unfaithful to her husband; neither did they condone any adultery by her that resulted in their birth. Yet all of a sudden, they have become the butt of their parent’s debacle. They found themselves unjustly exposed and punished because their mother committed an act of adultery.

I sometimes think about what it means when men go wayward and impregnate other women outside of their marriage. The usual thing is for these adulterous men to bring home the child to their wives, who get to perform the additional responsibility of taking care of a child not their own. They don’t get to decide to abandon the child or even seek divorce.

Flip this scenario to make the wife the offender…..One that goes outside the marriage to have a child with another man, and there is a strident call for divorce without any consideration of the fate of the child. There is always the inevitability of divorce in that instant situation. All my life, I have seen just one narrow instance where the wise husband chose to preserve the marriage although the wife went outside to get pregnant with another man. So there was this awkward situation in that household where the wife had gone outside the marriage and birthed a stranger’s child. Yet the man kept his wife and made the child his own. There was an outrage in the whole town, but the man remained steadfast, showering love upon a child the wife had brought to him from outside the marriage. And yet if you think about it, it was the right thing to do. After all marriage has nothing to do with whose children is whose. Or even who has sex with whom.

Marriage ought to be an intrinsic and eternal friendship between two people unbroken by the externalities of sexual promiscuity. But the problem is that most people confuse sex with marriage whereas marriage has nothing to do with sex. And as an offshoot of this superficial understanding of marriage, the product of any sex outside of the marriage brings about hatred and dire consequences for an innocent child.

It is only wild animals who insist on breeding their own offspring and spreading the blueprint of their own specific DNA. For example, lions will quickly kill the cubs of other male lions in order to spawn their own breed. With us humans the case ought to be different. Even polyandry and its concomitant mixed breeding will one day become a reality in our society, and nobody will be able to distinguish whose child is whose. Indeed, Socrates, speaking through Plato in the latter’s book called “Republic”, envisages a society where only strong men gather together to have sex with several women at the same time, spawning a breed of strong kids for the state. In that scenario, no child will know one man as his father: The collective decides to care for the lot of them!

As offensive as this suggestion may be to some people, the recent law being passed by South Africa’s parliament which makes polyandry-the marriage of one woman to several men- a legality, is a harbinger of the new trend.

This present oddity should herald the new reality that the one you today call your child may one day be an occupant of another man’s DNA. But what really is the big deal? If men can marry several wives, why can’t women too? The female animals don’t insist on that one-man principle: The only determinative sexual standard to them is strength: The male who can fight and kill the other male with the sole sexual prerogative. And so if the fight ends with the death of the alpha mate, mating begins right there and then over the dead body of the vanquished champion.

What about if these animals agree to share mates and raise their young ones together? There will be more lives saved, guaranteeing the survival of the species, not necessarily of the fittest. But animals can’t reason well, while we humans can, and do. And when we think carefully about it, the only thing that fosters civilization is peace. If we determine that sharing women or men and raising together young ones that are not necessarily ours is the way to our peace and survival, maybe sex will not lead to our extinction as it has occurred in some species.

One clever presumption of Texas Family Law is that a child born to a married couple belongs to the couple. That presumption is rebutted only within four years of the child’s birth, upon a plain challenge by another father. When two men argue over the ownership of a baby less than four years old, DNA can decide whose child it is. If you surreptitiously draw saliva from the children to conduct a private DNA after this timeframe, the court will find a way to disregard a negative results.

I will conclude by my own experience about this DNA testing thing. It is permissible, and indeed conclusive that if you have the DNA results of children you want to migrate to the state, you could voluntarily expedite your process by showing DNA testing results stating that the child is indeed yours. And so when I started my practice here in Texas, one of the ways in which I hoped to achieve quick results for my clients was via DNA testing. But there was a blow-back: Of the ten or so DNA tests I caused to be conducted, eight resulted in a negative. Nowadays, I know better than to encourage any test that almost always leads to the destruction of families.

In the end, we end as we began: The remedy for adultery may well be a divorce; but this notwithstanding, the marriage can still be held together intact upon a mutual understanding of the couple. But certainly, even where the adultery results in pregnancy, the best interest of the innocent children born out of adultery should remain paramount as a good public policy; and their best interest cannot, under any circumstances, be sacrificed on the altar of any bitter divorce. Men are the fathers of all children, just as women are the mothers of all children.