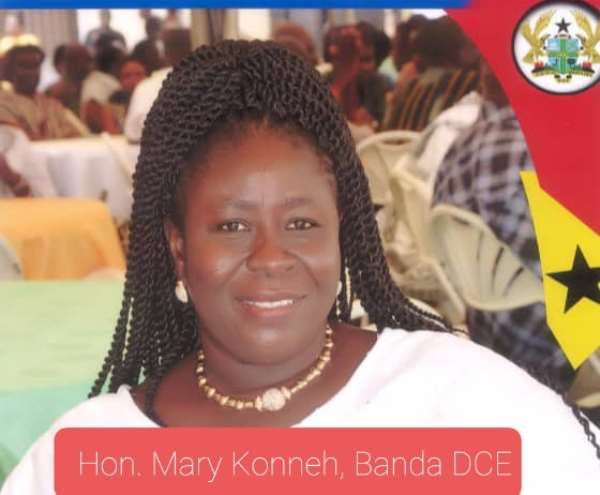 The Banda Traditional Council is indicating that development is the only lubricant that can curb the social vices within their Traditional Area and beyond. Development is crucial since it enhances an improved livelihood among individuals living in a specific geographical area. Every time an area of the world transitions from poverty to wealth, one country is usually the catalyst for the change. The United Kingdom was the first to industrialize in Europe. It was Japan in East Asia. Ghana could be the country in West Africa. We can get there with charismatic leaders like the Banda District Chief Executive, Mary Konneh. Indeed, finding work and food will not be an insurmountable task. Ghana has less ethnic fragmentation than many post- colonial governments since the Akan ethnic group accounts for almost half of the population. It does well on international governance quality, freedom, democracy, business ease, and corruption metrics. In terms of location, institutions, and human capital, Ghana enjoys several significant advantages over other countries in the region. It is located on the coast and has numerous ports from which to ship and receive goods. It has a population of around 31 million people, which is large enough to produce a significant domestic market but small enough to provide jobs and food for the population. Ghana cannot talk about agriculture without mentioning Banda.

Any individual who could be viewed as game change in terms of seeing to the finality of developmental tasks deserves praise. Ghana continues to struggle all in the name of good individuals who could manage our affairs properly for us. When we take a critical look at the change agent, Banda District Chief Executive (DCE), Mary Konneh, she is a woman of substance with a touch of simplicity, humility, and class. Ever since His Excellency Nana Addo Dankwa Akufo-Addo appointed her as the DCE, she has discharged her duties creditably. This has won her the reverence she now comfortably enjoys. It is no doubt that she has good intentions for the people of Banda hence the need for the President to retain her. This could be seen in her numerous involvements in seeing to the finality to various road projects, Hospital, markets, and schools. Again, she has been a strong advocate for girl-child education. A development that has motivated all young girls who could have otherwise gotten pregnant to focus more on their academic prospects. She organises periodic quiz competition to serve as a form of motivation to students within her District. This has gone a long way to change the status quo in the District. Her track records are enormous hence would not be able to name them all in this piece.

It is because of this that, the Banda Traditional Council is solidly supporting her candidature. The Omanhene of Banda Traditional Area, Osabarima Okokyeredom Kwadwo Sito I, Abrempong Hene of Banda Traditional Council and Abediakyire of Banda Traditional Area (Nananom Atena Nkonwa), Kwansiafamu Oseadeyo (Dr.) Barimah Kofi Anim Anyan Hantali I and the people of Banda and its environs appreciate her good works. According to Kwansiafamu Oseadeyo (Dr.) Barimah Kofi Anim Anyan Hantali I, the Banda District Chief Executive, Mary Konneh has performed creditably. The Area continues to see development by the day. “Why should we sit for her to be changed? No way", he warned. According to him, if Banda had had her as DCE earlier, the town could have been likened to a Capital City. Nonetheless, Abrempong Hene of Banda Traditional Area is of the conviction that, retaining her would go a long way to assuage sufferings of the vulnerable in the society thereby creating an enabling environment for development and peaceful co-existence within the Traditional Area and beyond. “A woman who has respected the Traditional Council and its people all through deserves accolades”. “Who doesn’t want to see development in his area?”, he quizzed. Why should Mary Konneh go? We are in support of her candidature. All others competing for the Position are equally good. However, there is a saying which goes like “the devil you know is better than the angel you do not know" he mentioned.

In view of this, the Abrempong Hene of Banda Traditional Council and Abediakyire of Banda Traditional Area (Nananom Atena Nkonwa), Kwansiafamu Oseadeyo (Dr.) Barimah Kofi Anim Anyan Hantali I, is appealing to His Excellency Nana Addo Dankwa Akufo-Addo to retain performing District Chief Executive, Mary Konneh for her to continue the good works. “We need Mary Konneh to continue her unfinished works to ensure that Banda becomes an enviable area. “Mary Konneh has shown class in terms of fulfilling her promises. Besides, women in government must be held in high- esteem hence the need for our very own change agent, Mary Konneh to be retained”, he indicated.