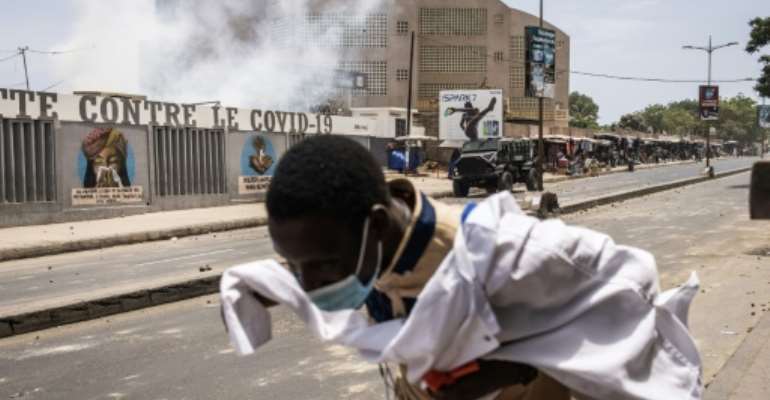 Demonstrators and police scuffled in Senegal's capital Dakar on Friday ahead of a vote on a contested draft law that would define "seriously disturbing public order" as an act of terrorism.

The West African state's government says the bill is intended to strengthen its fight against terror groups, but opposition figures warn that it would criminalise dissent.

One clause describes "seriously disturbing public order" as an act of terrorism, for example.

The Movement for the Defence of Democracy (MDD), an opposition coalition, this week urged supporters to demonstrate against the bill.

"This bill kills our democracy because it will accuse any dissenter of terrorism," Babacar Diop, an MDD leader, told a press conference late on Thursday in which she castigated the proposed legislation as "freedom-killing".

Protesters gathered in a central square in Dakar, according to AFP journalists on the scene, while police were deployed in the city centre.

The vote on the bill, to be held on Friday, comes amid uncertainty in Senegal over whether President Macky Sall will seek a controversial third term.

Senegalese presidents are limited to two consecutive terms, but some fear Sall will seek to exploit constitutional changes approved in a 2016 referendum to run again in 2024.

On Thursday, thousands of people demonstrated in Dakar against a possible third term for the 59-year-old president.

MDD representatives also told reporters that the anti-terror legislation is designed to suppress demonstrations in the event of a third-term bid by Sall.

In the bill, the government argues that current anti-terror legislation does "not fully cover certain issues," and points to areas such as terror financing in which the law needs to be strengthened.

Aymerou Gningue, the chairman of the parliamentary bloc allied to the president, told AFP that terrorism had become more complex, saying the new law is designed to combat the problem in "all its forms".