The power of government is impotent against Galamsey, the curse on the people of Ghana! 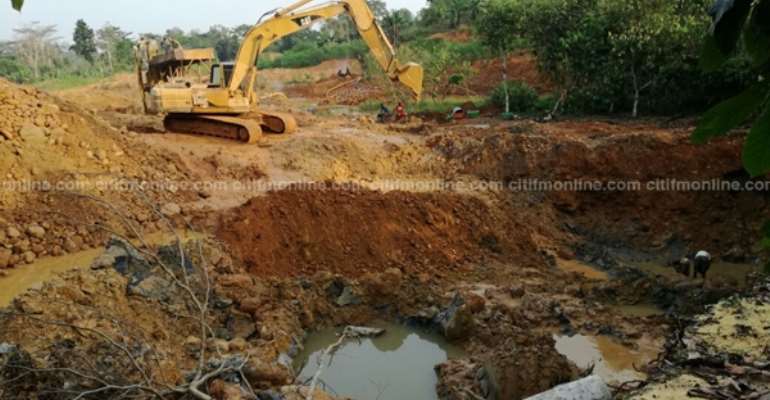 The president of Ghana is not an emperor . He is not ordained, even if some of his people think and say that the battle is the Lord’s. He has no kingdom; he rules at the will of the people who elected him and does not wield absolute power.

It is in his gift, however, to employ many people in the regional and local authorities, and he must make sure that they come from his party and will do his will, according to his vision of what is good for the country.

He shares his power with Parliament, where he may be fortunate to have a majority and where the role of the parliamentarian is to hold the government to account, ensure that good laws are passed and that their constituents, whether they voted for him/her or not, all get the benefits of good democracy.

An independent judiciary, another arm of government, is appointed by the executive. Though the judges may have their political beliefs and preferences, they are supposed to remain faithful to the constitution and the people in interpreting the laws of the land, and to be politically impartial in the way they do so.

In Ghana, we also have another nexus of power: the traditional authorities – chiefs and suchlike, who are supposed to be very much in the mix of helping to govern this country. Traditional leaders are anointed by divine intervention, even if, in some cases, a goat or cow must be slaughtered, and they must walk in the blood so that they will be transformed from ordinary human beings into rulers with magical powers.

And oh, yes, we also have “men and women of the cloth”, mainly self-appointed, who guide us and guard us, who prophesy about matters of wealth, health and death in Ghana and ask us daily to stay on the straight and narrow, paying our tithes and being generous in our donations to the ministries even if the bulk of the money then goes into their pockets.

Now, I hope that you forgive this long introduction – but today, I watched an interview of one of the celebrated Ghanaian journalists, a man of integrity – Cameron Doudu, adorned in red, and so, ready for war – talking about galamsey on Asaase Radio’s Sunday Night.

I also watched a clip accompanying the discussion, showing a patchwork of craters filled with poisonous water, and wondered, like Cameron Duodu, how we got ourselves into this mess with all these layers of authority.

He struck a chord when he lamented the destruction of his father’s farm in Asiakwa. He said he cried when he saw the devastation, and I believed him when I saw what has happened to our environment. I cried even harder when he told us this was not only about Asiakwa, but that the damage trails right into Kyebi.

Rush to cash in

That hurt me for a different reason. Kathryn Firmin-Sellers claims in her book The Transformation of Property Rights in the Gold Coast (published 1996) that the Okyenhene got it right when he set up a system which succeeded in protecting Akyem land from wanton and invasive exploitation by foreigners in their search for our minerals.

I had always used this to berate my Ga kinsmen that not only had the elite failed by not setting up a similar system, but we have not had an effective chief for as long as I can remember.

So, the Sunday Night interview with Duodu got me thinking. If the chief cannot prevent such wanton destruction of our environment in the crazed rush to exploit our rich mineral resources, then it must mean that the people have stopped listening to his traditional counsel. Which led me to think further that there is nothing much that the government can do about it.

The military? No way! Our soldiers are meant to protect the people of Ghana against invasion by a foreign army and really, they must not be introduced in any shape or form into civilian life. I still think that it was a mistake to let them run riot during the election and allow them to intrude into Parliament while MPs were quibbling about which colour should sit where in the House. Is it not these same armed forces who are fighting the people of La for land that does not belong to the government?

Developed by whose standards?

So, what is to be done? The answer came to me in a flash as I drove down Downsview Road in Croydon, in suburban Greater London, to a neighbour carrying some otinshinu that I’d got from Labadi Kitchen at the Kenley Factory in Lewisham.

The people of Downsview are fighting their local council over permitted development! The council has allowed property developers into the leafy road and they are offering millions of pounds to houseowners so that they can transform the land around the homes by converting it into flats and make huge profits.

The people have come together to fight the developers, all pledging that they will not sell their houses to developers even though they stand to make millions by doing just that.

It is only the people of Ghana who can stop galamsey; the chiefs alone cannot fight galamsey; and the military will become complicit if given the opportunity. The will of the people should be strong. And seriously, can we trust any government that is in a hurry to get the Chinese to own bits of Atiwa Forest even if it is on a long beneficial lease?

I could imagine the chaos if someone provided proof that there was gold under the earth in Accra . . . Perish the thought! We do damage to the environment at our peril. And I always thought that we were the first genuine ecologists – not fishing on Tuesdays and instituting a one-month ban on noisemaking before Homowo.

What is it that they say at Ga outdoorings? May he come to respect the Earth!

Owula Ade Sawyerr is a writer, social activist and founder partner of Equinox Consulting, which works to develop inner-city and minority communities in Britain. He comments on economic, political, and social affairs and is a past chairman of the UK branch of the Convention People’s Party. www.equinoxconsulting.net [email protected]

Tunisians in largest rally against president's 'coup'
20 minutes ago