Have you been promoted after handcuffing Caleb of Citi FM? 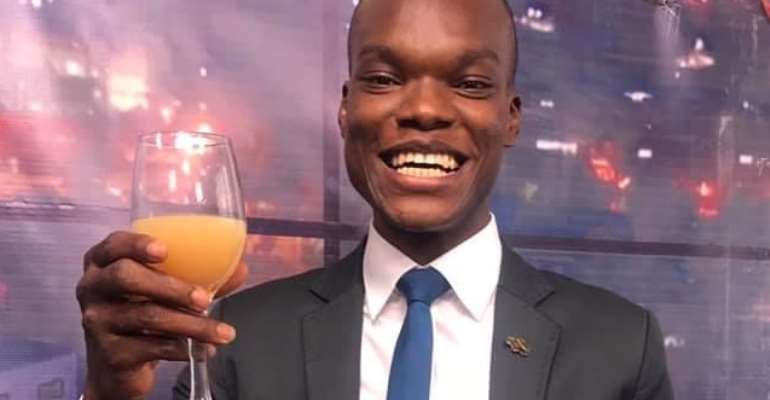 We enjoy this democracy because of the effort of our Journalists and Reporters for crying out loud. Politics in Ghana is becoming dirty by the day. This could be seen in the numerous attacks on Journalists by the political divide over the years. When the New Patriotic Party (NPP) was in opposition, they enjoyed the turmoil hitting directly on their opponent the National Democratic Congress (NDC). But in power, they see it as a threat.

As a young person, I feel worried when gradually Ghana is experiencing a certain culture of silence. Why is it that a party that was viewed to be all accommodating is suddenly seen by the populace as intolerable. I'm beginning to believe that an animal's frustration in a trap is entirely different when it is freed. Irony of life, I say. I look up to some of these people at the helm of affairs. Even in school, majority of these security personnel and politicians are the role models of some students. How could you have effected an arrest on a harmless journalist in a Rambo-style even if her offence was grave? It was unprofessional, unmerited and an indictment on the freedom of the Press. The Fourth Estate of the Realm shouldn't be underestimated. This Realm has the power to make and unmake you as a National Security Operative or the Government of the day.

Power must be handled with care. I have stayed in the Police Barracks for over 10years because one of my Uncles was a Highly Respected Senior Police Officer. He's gone on retirement but still looking hale and hearty. Unlike some of his counterparts who took bribes & saw to the incarceration of many innocent persons. Today majority of them are battling strokes and others are paying dearly for the atrocities they committed while in service. Every Police Officer is civilian in uniform. Enough of the intimidation.

People are living in penury and you expect them to be silent. Hell no! I received the arrest of the journalist with Accra-based Citi FM, Caleb Kudah with shock. He was reportedly picked up by National Security operatives. Sources say, the operatives stormed the premises of the Adabraka-based station in attempt to whisk away Zoe Abu-Baidoo for receiving a footage from Caleb. How can you possibly kill a fly with a bulldozer? Have you been promoted after handcuffing harmless Caleb? I want to know.

The sources hinted that he was arrested for allegedly filming a video at the premises of the National Security Ministry. Really? Come on. Ghana has grown past this stage of intolerance and vindictiveness. Besides, there are other pressing security issues the National Security Operatives and Police must tackle not this one. So at this stage, let me humbly quiz; Have we arrested Armed Suale's killers? How far with the case of the murderers of Hon. J.B. Danquah? What has been done after Justice Emile Short Commission which investigated the violence that marred the January 31, 2019 Ayawaso-West-Wuogon by-election concluded with their findings?

Listen up, if the good people of this country decide to come at any government based of the numerous corruption allegations, bad road network, poor sanitation, insecurity and lack of press freedom, no government can't contain the heat. Why pretend as though all is well when truly aware of the fact that times are hard? What kind of dishonesty is this? For how long will this attack on media practitioners seize?

The Ghanaian journalists are living in fear owing to the incessant attacks on them. If you are not shot to death today. You could be assaulted tomorrow. The sad issue is that, it is alleged that some politicians and security operatives are the perpetrators of this crime. But they're untouchable, sources say. There wasn't any need to arrest a fine lady as though you were about to apprehend a hardened criminal. It was totally executed out of proportion and would urge the Management of Citi Fm and the Ghana Journalists Association (GJA) to take the matter up. Some politicians are said to have instigated the masses to deal ruthlessly with journalists yet expect the same journalists to cover their stories for them. Don't you have a shame?

It is better to allow the citizens to indicate their grievances. That way, you will better understand their issues and work assiduously in solving them.

I don't believe using the so-called minimum force to intimidate journalists is the solution to our numerous Socio-economic Issues.

Truth is Ghana needs to be fixed and it starts from politicians. There are politicians who fight in the full glare of people in Parliament but are walking free. A certain MP was seen on national television snatching ballot papers but hasn't been arrested. This Ghana.

The government of the day must take backslashes in good faith because it is for their own good.

Let's come together in building a prosperous nation. Ghana will develop only when our leaders stop siphoning monies belonging to the state.