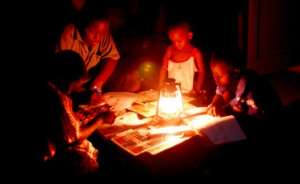 The recent power issues in the country continue to be a major concern for most Ghanaians despite the government’s assurance of a constant electricity supply.

For them, the current situation does not really paint a good picture as government suggests.

They have huge fears that the most dreaded erratic supply of power popularly referred to as “dumsor” has returned.

Since the beginning of 2021, parts of the country have always been plunged into a state of darkness often without prior notice.

The situation affects the everyday lives of Ghanaians especially those who rely on electricity to run their businesses. They have decried the impact of the situation on trading activities .

On social media, in particular, there have been a lot of conversation about the worrying trend with those suspecting a looming power crisis calling on authorities to publish a timetable if need be.

But, the power transmission company, the Ghana Grid Company Limited (GRIDCo) has reiterated that the situation is not about generation challenges but rather, ongoing maintenance and repair works on a number of its equipment and plants.

Ghana’s national power outages reached a crescendo between 2014 and 2015 during the erstwhile John Dramani Mahama era.

Fast-forward to 2021, the crisis seems to rear its ugly head again, although government always shoots down such concerns. IES prediction

It began in February 2021 when the Institute of Energy Security (IES) predicted a complete shutdown in power supply in Ghana following the lack of preparedness by the government to take over the Ameri Power deal.

According to the Institute, although Ameri Energy wrote in September 2020 to inform the government of its intention to hand over the plant by the date stated in the contract, the government of Ghana has not yet carried the necessary steps to ensure a smooth handing over.

The first of the incidents was on February 10, 2021, when the Electricity Company of Ghana (ECG) announced power outages in parts of Accra the next day, February 11.

This was to enable a contractor to commence excavation works to interconnect load from the Pokuase Bulk Supply Point (BSP) to the Kanda and Airport substations.

The power outages were between 10 am and 4 pm each day from February 11 to March 5.

For instance, it said gas supply challenges from the offshore fields were to blame for the blackout on the night of Saturday, February 27, 2021.

Since then, Ghanaians in Accra and other parts of the country continue to experience unstable power supply.

While some saw low current, others experienced power-line flicker. There are also those who report a total power outage.

Black-outs and explanations from GRIDCo

Since the beginning of the year, GRIDCo has through statements given explanations on six separate power outages.

March 3: GRIDCo said the closure of an emergency valve at the West Africa Gas Pipeline Company (WAPCo) was to blame for power cuts in parts of Ghana that day. According to the company, the action ended up curtailing gas supply to some generating plants in the country”.

March 7: A challenge in GRIDCo’s power system led to a total system shutdown and total power outage nationwide. This led to an interruption in power supply to all parts of the country.

March 8: The total power system shutdown that was experienced that day was due to a technical fault on one of the major transmission lines between Prestea and Obuasi, according to GRIDCo. In line with the challenges, the Ghana Highway Authority announced that sections of the N1, N2 and N4 highways will experience some minimum to maximum disruptions to traffic flow to enable GRIDco to undertake the stringing of transmission line conductors across the N1, N2 and N4.

March 17: Power supply to parts of the Volta Region was interrupted for five days due to GRIDCo’s extensive maintenance works in the area. Parts of Hohoe, parts of Ho, Sogakope, Akatsi, Kpando and Tsito were among the affected areas.

March 24: The power transmission company indicated that a technical fault upstream was responsible for the outage experienced in parts of Accra East, Winneba, Techiman and Sunyani. In a statement, GRIDCo said the power outage was reported by the Ghana Gas Company which said there was a compressor fault upstream, leading to the loss of 750 megawatts of power at about 1 am.

April 4: This was the latest of the power cuts. GRIDCo attributed it to a technical problem. The company explained that its conductor on the Tema-Accra East transmission line fell at Trasacco hence the outage.

Analysts believe that, if the trend continues, industry and businesses will be adversely affected as companies would have to spend huge sums of money to power their power plants.

‘Dumsor not back’ assurances

Amid fears that Ghana may return to the days of load shedding, GRIDCo assured that it has adequate generation capacity to meet demand in the country.

First was the open letter written by its Chief Executive Officer, Jonathan Amoako-Baah which said, dumsor was not back and that it was impossible for such erratic power cuts to return.

He argued, that none of the key participants in the power value chain was resting on their oars, in an effort to maintain stability, accessibility, consistency and reliability of power supply at all times.

In subsequent media interviews, he primarily attributed the intermittent power disruptions being experienced to a system upgrade and not a regular load-shedding exercise as many continue to misconstrue.

Later on, GRIDCo indicated that the country may in the coming days experience intermittent power outages for which reason a schedule will soon be drawn and made public to enable various maintenance and repair works to be carried out within the power transmission and distribution chain across the country.

Corporate Communications Manager for GRIDCo, Ebenezer Amankwah said the company was engaging the Electricity Company of Ghana (ECG) to decide on how best to go about the outages in order not to severely impact Ghanaians.

But in a statement issued on Wednesday, March 31, 2021, GRIDCo called for calm saying, it had no intention of publishing a power rationing timetable .

PURC said although the GRDCo, ECG and NEDCo were investigating the problem, it will also launch its independent investigation into the problem and will sanction non-compliant utility providers.

According to the Chamber, it expected that the grid managers will investigate the cause of the power failure, how the grid was restored and make public the findings as well as appropriate measures to forestall future occurrences.

Former Power Minister, Dr. Kwabena Donkor, believes the challenges being faced in the country's power sector is financial and not due to technical faults as being claimed by GRIDCo.

Meanwhile, a former Ranking Member on Parliament's select committee on Mines and Energy, Adam Mutawakilu, says GRIDCo’s inability to adjust its system in response to power supply challenges has led to the mass power cuts.

Furthermore, a member of the National Communication Team of the opposition National Democratic Congress (NDC), Wonder Madilo is not convinced with GRIDCo’s reason for recent power outages in the country.

He believes the explanation is a cock-and-bull story.

The government continues to receive a lot of backlash from Ghanaians due to frequent blackouts.

But as pressure mounts on companies within Ghana's power distribution chain following recent intermittent power cuts, Ghanaians have only been urged to manage the situation as works are carried out to resolve the recent power challenges facing the country.