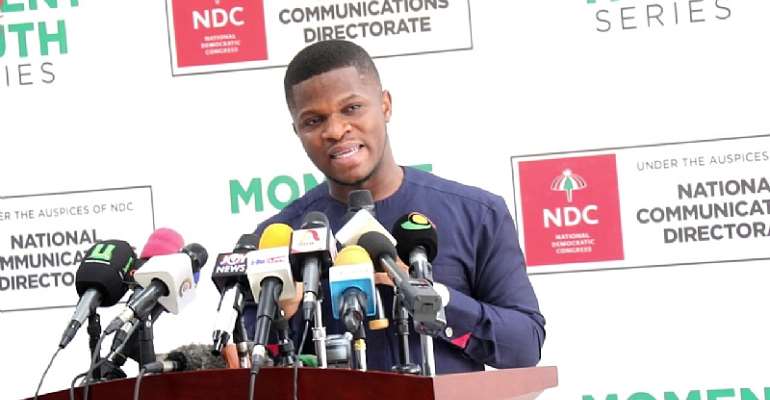 It has come to the notice of the leadership and members of the NDC in the Nadowli Kaleo Constituency, an unfortunate publication in both traditional and social media attributed to the National Communication Officer of our dear party, Lawyer Sammy Gyamfi.

The said publication calls into question, the integrity of the Speaker of Parliament, our former Member of Parliament. We wish to use this opportunity to register our dissatisfaction and disgust with this conduct of the National Communications Officer of our dear party.

Inasmuch as the Rt. Hon. Alban Bagbin is not above criticisms, we are however unable to accept the sort of comments made by Sammy Gyamfi that describe the Rt. Hon. Bagbin as a betrayer.

As a national officer of a Party of large followings, Sammy could have resorted to using appropriate structures within the party to seek address his concerns, and not the manner that has exposed the Speaker to attacks by a section of the Party's followers. His comment has misled many followers into thinking that the Speaker was part of those who voted or that he has the power to cause to be rejected, the nominees that were expected to be rejected. The reality is that, the Speaker does not have an original or casting vote as stipulated in the Constitution and the Standing Orders of Parliament.

To say the least, Sammy Gyamfi's emotional outburst has brought the name of the Speaker into disrepute.

For 28 years of his service to the people in the Nadowli/Kaleo constituency and to the NDC and Ghana at large, we have never been betrayed by our Former MP and now Speaker of Parliament. He has, over his long years of service to building the NDC and Parliamentary democracies, done his part to the best of his ability. We never for once, heard that he betrayed the very Party he represented as an MP and if he did betray the NDC, we in this Constituency would have cut short, his stay in Parliament.

We recall his days as a Minority leader in Parliament and the work he did to get the Party back in power in 2009. Against all odds, oppressions and intimations from the Kuffour's administration, he carried this Party along at the time many of our compatriots had recoiled for fear of adverse actions against them by the NPP during President Kuffour's regime. He resisted bribes from elements of the Kuffour's government to silence him. If he had accepted the bribes, he would not have been able to hold the Kuffour's administration accountable to the People. His determination and zeal to get the NDC back to power yielded fruits when Professor Mills was elected as President.

His contributions to the Party's rebuilding when it nearly collapsed in 2001 is well documented for all of us to learn as being one of the greatest Minority leaders Ghana has ever seen in our Nation's history. He saw the monies and goodies enough to betray as a minority Leader but he never did. We are therefore unable to unaccept Sammy claim that Bagbin is a betrayer especially when he has shown throughout his service to this Party, that he is a man of dignity, never yielded to such acts and will never commit to that. To call such a dignified man who refused to betray the NDC for millions of cedis and dollars in several attempts from elements in the Kuffour's administration is highly unfortunate, except to say that, there is a predetermined agenda to give a dog a bad name for hanging. We resist that as members of the Party in this Constituency. No one loves the NDC more than Rt. Hon. Bagbin.

As a member of the Political Committee chaired by H.E.John Mahama, Sammy Gyamfi cannot be ignorant of the works of Rt. Hon. Bagbin throughout the electioneering period to get the Party elected. Even when the National Communications Officer introduced the Moment of Truth Series and the Weekly press series, not a single one of them was left uncovered by Tumpani FM 88.5 in Nadowli to carry the message to the People and for every two weeks, Bagbin was paying at least Ghc5000 to cover the cost of airtime for these programs. This continued until the last press conference that was addressed after the December Elections. This contributed to significant increase in votes to the NDC. Is our National Communications Officer saying these communication activities under his auspices that Bagbin funded amounted to betrayal?

As Officers and members of the Party, we must not be sentimental or emotional about issues in a hurry. When the NDC won the Speakership election over the NPP, We did not see any NPP National Executive member openly insult or attack their leaders in Parliament in the manner Sammy did. They did not expose their leadership to the public for public ridicle. Rather, they chose to interrogate and investigate themselves to ascertain the cause of the defeat in the Speakership election. Probably, if they had done it the way Sammy did, most of their MPs would have felt offended and could possibly vote against persons nominated to be ministers.

Notwithstanding that, We are equally disappointed that some of our MPs voted for approval of some of these nominees when their "sins" against the NDC and Ghana at large were unforgiving. Nonetheless, we cannot use the sins of the few MPs who, for whatever reason (s), chose to reject Hon. Koomson and others to expose the entire caucus to vilifications and ridicle in the public. We cannot fathom why someone like Ursula Owusu should be obtain a single vote from the NDC side when she openly insulted them of taking leave of their senses and contributed to the closure of Media Stations affiliated to the NDC. Just like our former legislature, we have in Hon. Anthony Sumah, a worthy replacement that sees betrayal as a sin against humanity and God. He will never betray the NDC, the Party that gave him the opportunity of becoming a member of Parliament. If he is found capable to be involved in any act or form of betrayal of the NDC, this Constituency will not forgive him but until then, we are solidly behind him in his legislative activities.

In conclusion, we call on Sammy Gyamfi to render an unqualified apology to the Speaker of Parliament for dragging his name into disrepute.

We further call on all members of the Party in the Nadowli Kaleo constituency to remain calm and continue their good work for the Party. We must all be encouraged to work harder than we did in 2020. We must add vigilance to our work in our quest for power. As H.E. John Mahama told us in his response to the selective Supreme Court judgment, we must be hopeful more than ever.

We again call on the National Executive Council of the Party, together with the Council of Elders and Parliamentary Caucus of the Party, to take immediate steps to investigate the circumstances that led to the mass approval of ministers whose actions cost the NDC, a resounding victory in the 2020 polls.

This will enable the Party to forestall any such unfortunate decisions in the future. We call on all members across the Country to ever restrain and to lend their support to the leadership in their remaining Parliamentary duties. We must continue to uphold the Constitution of the Party in addressing our grievances by using the explicitly spelled out channels in doing so.