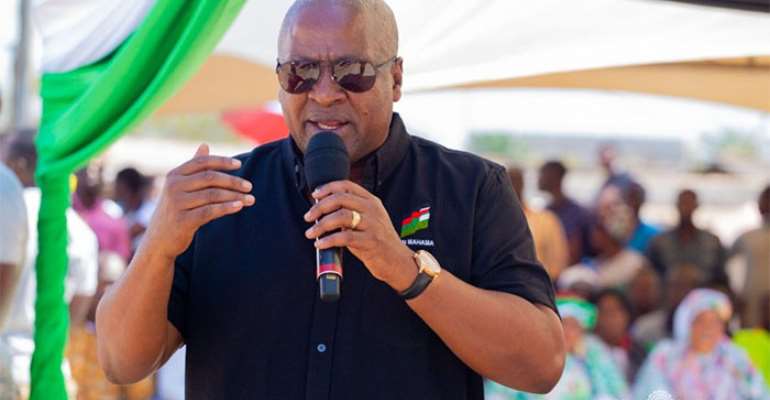 The gospel truth is that Mr. John Dramani Mahama has never won any presidential election in God's own country. But for the five Supreme Court Judges who voted for him to sit on the throne, he will never have been the President of Ghana through free and fair election.

This is a man who was the first to inherit the presidency when his boss, Professor John Evans Atta Mills died untimely and mysteriously. When he completed his tenure after the death of the professor, he decided to run for the presidency and the result was the disputed one, which ended at the Supreme Court with a split decision. But for Justice Atuguba who threw his weight behind the other judges who ruled for Mr. Mahama, his dream of becoming the President of Ghana through Presidential Election would have hit the rocks.

When he reared his head again in 2016, Candidate Nana Akufo-Addo disgraced him at the polls by winning massively to send him to sleep too early. The man lost badly by more than one million votes. Unable to bear the pain of defeat, Mr. Mahama started to grow lean. After that loss, six top guns of the NDC made a decision to challenge him during the party's 2020 primaries which he won with money. After all, he was receiving his salary as a former Head of State while others did not. It was therefore not surprising that he won the primaries.

Then he cunningly started to work his way to take full control of the party. The man realised that the late Jerry John Rawlings was a torn in his flesh and a stumbling block in his quest to take full control of the party, and as such he set in motion his hounds and attack dogs to go after the man who founded the party when the going was tough. Unable to bear it any more, Mr. Rawlings as usual fought back and the result was a fragmented party and the centre could not hold. The old guards in the party abandoned ship and became indifferent in whatever happened in the party. That was what Mr. Mahama wanted and he had it.

When the party opened nomination for the election of national executive members of the party, Mr. Mahama showed his real colours to the unsuspecting Voltarians in the party who were so loyal to their kinsman, Mr. Rawlings. So it came to pass that Mr. Mahama worked so tirelessly to make sure key positions were not held by Voltarians who contested. That was how come bigwigs like Dan Abodakpi, a veteran gem, Koku Anyidoho, a firebrand, Anita De Sooso, an acid-tongued lady, lost at the National Delegate's Congress of the party. As if that was not enough, Mr. Mahama went on to sideline all those who contested him during the presidential primaries and went along with his 'babies with sharp teeth'. That was when he started to dig his own grave.

Mr. Mahama always tries to play smart but sadly, he is not clever enough. The Akans say 'woe betides the one who has no elders to advise him or her'. In the run up to the 2020 elections, Mr. Mahama was walking naked but he did not know because he had itching pair of ears that was ready to listen to only sweet praises. The man was made to understand that winning the 2020 Presidential Election was a done deal and so he should not worry. Even when he was trashed at the polls, he was made to understand by upstarts like Sammy Gyamfi, the master propagandist that he was the “President-Elect”, and he enjoyed that accolade so much. Poor guy!

You see, anytime I go down memory lane like the way I am doing, I want readers to understand that history belongs to those who live through it and a greater majority of Ghanaians have lived and continue to live through my narrations. What Ghanaians should watch out and be wary of is that if care is not taken, this over ambitious Mahama guy can easily set the country ablaze one day. See how he was able to deceive his followers to hit the streets with the assurance that he won the 2020 Presidential Election only to go to court to say he did not and that his opponent too did not win the election either and so there is the need for a re-run. That is smart Mahama for you.

I do not know and I want to believe that you do not know either how the pendulum will swing after the ongoing Supreme Court hearing, but what I do know is that there will be a loser. If the petitioner wins, expect peace in the country but if he loses expect chaos because the trademark of Mr. Mahama is violence. He will call his supporters to hit the streets one more time to register their displeasure at the ruling. Some bigwigs of the party like shameless Dominic Ayine, a Member of Parliament and a lawyer for that matter, who should have known better, made the pronouncement that the judges at the Supreme Court have predetermined the case. If a person has such a warped mind you can imagine what he will say after the ruling and what he will tell the supporters of the NDC if he gets the opportunity to address them.

But do you think the government will sit down for a power-drunk individual to turn the apple cart upside down? The answer is a big NO! Well-meaning Ghanaians should gird up their loins and get ready for anything that the NDC will try to do to make the country ungovernable. We must not let them have their way and we must prove to them that every person has red saliva in his or her mouth but we decide to spit out the white one for the sake of peace. In fact, some of us can even spit fire.

Supporters of the NPP were angry with their leadership when they were admonished to avoid hitting the streets to confront the NDC when they were playing the buffoonery on our streets across the length and breadth of the country. This time around, I do not think anyone can stop them if the NDC supporters decide to hit the streets if the ruling does not go in their favour. When the time comes, only the strong would survive on the battlegrounds of contending dooms. Mark my words and beware of the Ides of March. Good morning, Mr. President-Elect!!!

Akuapem Poloo conviction should serve as a deterrent to nude...
14 minutes ago