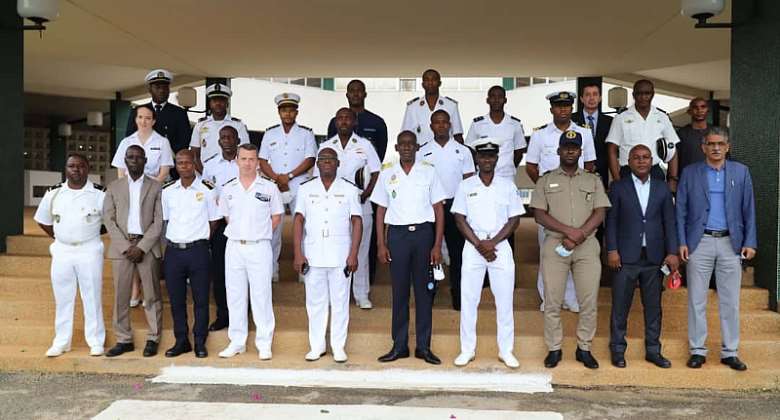 The International Maritime Institute (ISMI) of the Regional Academy of Maritime Sciences and Technology (ARSTM) has ended a three-day training course in maritime information and intelligence for maritime intelligence analysts.

The training course which was held in Abidjan, Ivory Coast on February 16 has ended today February 19, 2021 funded by the French cooperation.

In all, 20 auditors from 12 Gulf of Guinea countries, officers from maritime operational centres and coordination centres, ship commanders, intelligence officers participate in the training course.

Speaking at the opening ceremony, the Director of ISMI, CDT Abe Ake Lazare noted tha.t the holding of the seminar follows the resolutions of the Yaounde Summit which emphasized, certainly on training, coordination of interventions, but also on information sharing and intelligence.

He indicated that the effectiveness of a global security strategy obviously depends on operational resources and the adoption of an adequate legal framework, but also on the ability of the various players to collect, analyze and disseminate information in order to target risks, define control strategies and guide interventions.

According to him, new threats such as terrorism, Jihadism, cyber-crime and piracy are difficult to identify and target. H He added Parliamentary experts are increasingly concerned about asymmetric warfare hence the organization of the seminar is therefore timely.

He stressed that the seminar also aims to provide a framework for capacity building of the structures and services in charge of collecting, analyzing and processing information and to make an inventory of the tools and channels of communication and information dissemination.

CDT Abe Ake Lazare expresses gratitude to France, whose constant support at the technical and financial level has made the organization of the seminar possible.

He extends a special greeting to the Regional Coordinator of the Support Programme for State Action at Sea in the Gulf of Guinea for their support.

The Chief Maritime Affairs Officer, the Regional Coordinator of the Support Programme for State Action at Sea, Guillaume Turquet of Beauregard indicated that the Gulf of Guinea presents high stakes, not only for African economies but also for Asian and European economies.

According to him, it is estimated that 60% of the species fished in the Gulf of Guinea are fished illegally.

He added that all kinds of trafficking pass through the Gulf of Guinea such as drugs, illegal fuel bunkering and all kinds of illicit goods.

Guillaume Turquet Of Beauregard noted that in order to combat these worrying phenomena, it is necessary to have technical know-how specific to each field, but this is not enough. It is also and above all necessary to have reliable information, i.e. useful, updated and cross-checked.

He added that in the maritime sector, this implies having information on flows, exchanges, mobiles, and ensuring that this information is not compartmentalized but available to those who need it.

According to him, the capacity of the various maritime centers to collect, analyze, and disseminate information to target illegal or high-risk activities is a key factor in the success of the regional maritime security strategies adopted by the Gulf of Guinea States.

The objective of this training, he added, both theoretical and practical, provided by ISMI is precisely to build capacity in this area.

He added that the seminar will also provide an opportunity for discussions to identify the strengths and weaknesses of each participating State and to create contacts that may prove useful for later.