By Danny Kemp with Grace Matsiko in Lukodi, Uganda 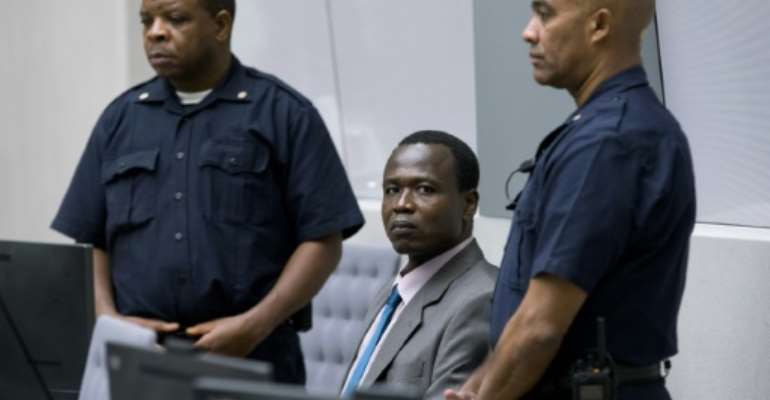 Dominic Ongwen was recruited by the LRA as a child. By Peter Dejong (ANP/AFP/File)

The International Criminal Court on Thursday found a child soldier-turned-Lord's Resistance Army commander guilty of war crimes and crimes against humanity during a reign of terror in Uganda.

Dominic Ongwen, 45, was found guilty of 61 charges including multiple murders, rape and sexual enslavement by the rebel group, plus the first ever conviction by the Netherlands-based court for the crime of forced pregnancy.

ICC judges dismissed defence claims that the Ugandan was himself a victim of the notorious LRA, led by the fugitive Joseph Kony, as he had been abducted by the group as a nine-year-old boy and turned into a fighter.

Ongwen had personally ordered attacks on refugee camps in northern Uganda in the early 2000s by the LRA, which waged a bloody campaign to set up a state based on the Bible's Ten Commandments, the judges said. 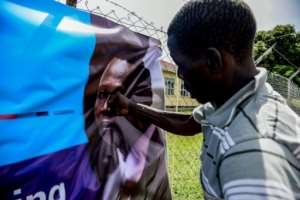 A man punches a banner bearing a picture of Dominic Ongwen. By ISAAC KASAMANI (AFP/File)

"His guilt has been established beyond any reasonable doubt," presiding judge Bertram Schmitt said as he read out the verdict in the tribunal in The Hague.

"The chamber is aware that he suffered much. However this case is about crimes committed by Dominic Ongwen as a responsible adult and a commander of the Lord's Resistance Army."

Ongwen, nicknamed "White Ant", will be sentenced at a later date and faces a maximum punishment of life imprisonment.

Victims and rights groups hailed the verdict as "historic" as it the first conviction to date at the ICC of any leader of the LRA.

The LRA was founded three decades ago by former Catholic altar boy and self-styled prophet Kony, who launched a bloody rebellion in northern Uganda against President Yoweri Museveni.

The United Nations says the LRA killed more than 100,000 people and abducted 60,000 children in a campaign of violence that spread to Sudan, the Democratic Republic of Congo and the Central African Republic. 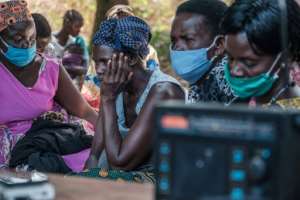 People from Lukodi gather around the radio to listen to the verdict. By Sumy Sadurni (AFP)

Judges said Ongwen -- whose nom de guerre means "born at the time of the white ant" -- rose to become a senior commander ordered his soldiers to carry out massacres of civilians at the Lukodi, Pajule, Odek, and Abok refugee camps between 2002 and 2005.

Children and mothers with babies tied to their backs were among those killed, said judge Schmitt, who read out the names of the victims.

Ongwen, as commander of Kony's infamous Sinia brigade, was responsible for the abduction of girls to serve as domestic workers and sex slaves, and boys to serve as soldiers, judges said.

Seven of these women were forced to be Ongwen's "so-called wives" and two gave birth to children, leading to the historic conviction for forced pregnancy.

Soldiers under Ongwen's command forced some mothers abducted by the group to abandon their crying babies in the bush so they could carry supplies. One two-month-old was dumped in a rubbish pit.

At the opening of the trial, prosecutors played gruesome videos of the scene after an LRA attack on Lukodi refugee camp, showing disemboweled children and the charred bodies of babies in shallow graves.

Kony promoted Ongwen to colonel at about the time of the attack, the judge said.

Ongwen surrendered to US special forces who were hunting Kony in the Central African Republic in early 2015 and was transferred to the ICC to face trial. 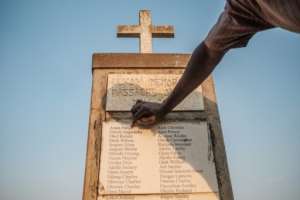 Olanyia Mohammed, 38, escaped a massacre in his village but lost 15 members of his family. He points at his parents names etched on a memorial. By Sumy Sadurni (AFP)

Survivors, victims and former rebel fighters from Lukodi sat under mango trees to listen to the verdict on a small radio provided by a local leader, and burst into cheers when it was announced.

"Good," shouted Angelina Okiror, 38, a resident of Lukodi, when the verdict was read out.

"At last justice has been delivered," added Ann Maria Angwech, 43. "Because Ongwen killed, he deserves death, because with his hand he took away innocent lives and left we the survivors destitute."

Residents told AFP the horrors of the attack still lingered fresh in their memories.

"A total of 15 of my family members were killed during the attack and very many people were injured," said farmer Muhammed Olanya, 38.

"One LRA leader has at last been held to account at the ICC for the terrible abuses victims suffered," said Elise Keppler, associate director of the International Justice Program at HRW.

"Would-be rights violators should take note that the law can catch up with them, even years later."

Kony remains at large despite a massive international manhunt on an ICC warrant.

A/R: Over 500 houses earmarked for demolition in Afigya Kwab...
24 minutes ago