Savana Signatures received a citation in recognition and appreciation of the organization dedication and distinguished humanitarian services in its catchment areas.

This was presented to the organization by the people of Nabu community and its environs; a community in the Nkwanta North District of Oti Region, Ghana.

The citation was presented at an outdooring ceremony of Mother-to-Mother support groups; groups of 14-15 mothers each instituted with the support of Savana Signatures and taken through various educational activities on health, girl-child education, Child marriage and entrepreneurial development.

The Nkwanta North District Health Director, Mr. Muhammudu Abdul Aziz said, the coming of Savana Signatures in his district to implement the I Matter project geared towards influencing health delivery and access, promoting girl-child education and enhancing women entrepreneurial skills was at the right time.

According to him, a lot more was needed to influence attitudes of people in the communities to uphold better health practices and to send their girls to school, thus the mother – to – mother support groups were necessary intervention.

Impact of the mother – to – mother support groups

“Through the project, parents now demonstrate a keen interest in supporting the girl-child to enroll in school. The mother – to – mother support group has also helped other women in health issues; just a month ago, members of the support group supported a lactating mother on ways of improving her baby weight after the health practitioners said her baby is underweight” he said.

Speaking at the event, Prince Agbesi Sitsofe, a Community Health Nurse at the Nabu CHPS Compound who facilitated the mother-to-mother support group discussions sessions said, Savana Signatures after instituting the group, further supported them with manuals used to guide the training of the women.

According to him, parents in the community used to provide their children with a cloth during their menstrual period as well as gave girls who got pregnant out for marriage. “After the training, parents now provide the girl-child with disposable sanitary pads and also are committed to curbing teenage pregnancy and making sure every girl stays in school, even during pregnancy.”

He was quick to add that, the long-standing norm of the community where women have no decision power with regards to the development of the girl-child is becoming a thing of the past as women are now given the chance to make decisions that involve the girl-child.

He thanked Savana Signatures and its partners for coming to their aid and changing long-standing traditions that militate development in the Nabu community. 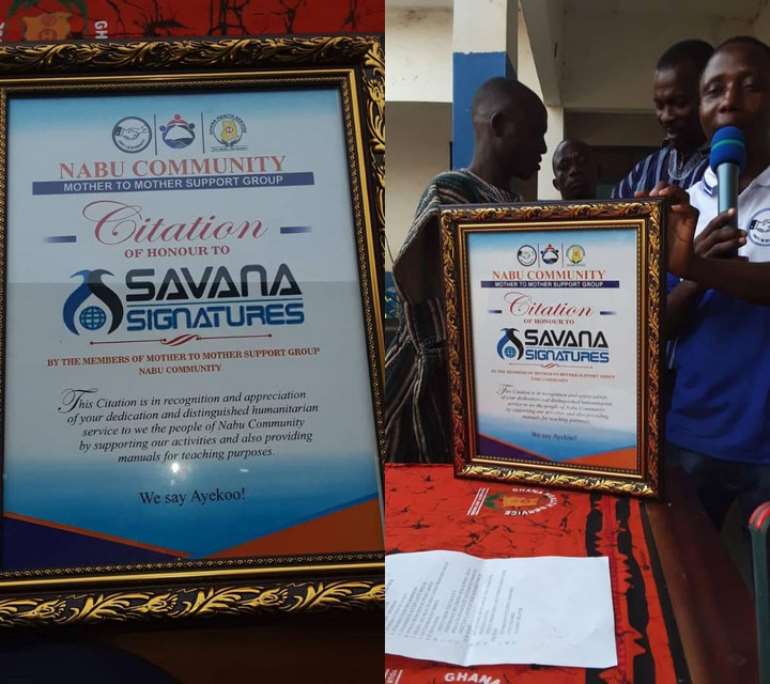