In Gabonese city, the two faces of a mining boom 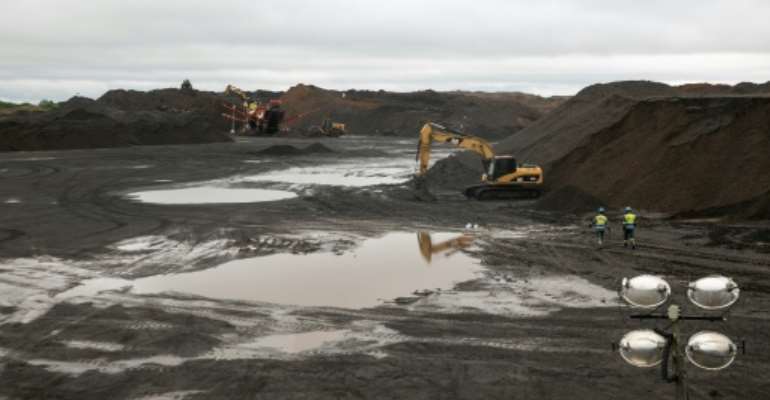 COMILOG says Moanda lies on a quarter of the world's reserves of manganese, a mineral used in steel and batteries. By STEEVE JORDAN (AFP)

Mipoko marvelled at the new spigots as she filled containers with water and loaded them onto a creaking wheelbarrow.

The taps have been installed for the public by COMILOG, a mining giant that has extracted manganese in the Gabonese city of Moanda for decades.

Next to her, Germain Ndoulouga, a 38-year-old unemployed man, grumbled: "It would be great if only COMILOG gave us jobs."

COMILOG has transformed what was once a village of some 500 residents into a city of around 60,000.

But it is one where wealth and comfort for a few contrasts with poverty and want for many, and where basic infrastructure is widely lacking.

Working for COMILOG, the Gabonese subsidiary of the French mining and metallurgy group Eramet, is Ndoulouga's dream.

"When you join COMILOG, your status changes in your family, in the city and in the whole society," he said.

COMILOG -- an acronym for Compagnie Miniere de l'Ogooue -- says the mine straddles 25 percent of the global reserves of the mineral used in the manufacture of steel as well as in batteries. Eramet is the world's second-biggest producer of high-grade manganese.

Since 2018, COMILOG has touted its investment plan for the local community, but the gap remains between its 2,000 or so employees and the rest of the population.

Unemployment reached 25 percent in 2017, the last official figure available in the region including Moanda, which lies 700 kilometres (430 miles) east of the Gabonese capital Libreville.

Sumptuous villas dot the verdant hill overlooking the city, and around 200 high-level employees enjoy a company gym, restaurant and even a cinema -- a form of entertainment that has vanished from Libreville.

Guards protect the privileged community, in which the position of the houses is determined by the employees' rank in the company. COMILOG pays for amenities such as electricity, plumbing and even gardening.

Even rank-and-file employees working for COMILOG enjoy benefits such as free care at the company hospital and free education at schools equipped with cutting-edge computers.

Since COMILOG began exploiting Moanda's manganese in 1962 -- two years after Gabon's independence from France -- the municipality has grown apace, but its infrastructure has lagged far behind.

Neighbourhoods on the periphery often lack water or electricity.

"We don't even have public (water) pumps," said single mother Huguette, wearing a football jersey. The 19-year-old raises her daughter in a wooden shack at the end of a pot-holed road.

Even in the city centre, the bumpy red dirt roads are dotted with potholes and lined with rubbish.

The Moanda hospital, unlike COMILOG's, is in a dire state, unclean and without air conditioning or mosquito nets. In one hall, patients lie on a dozen mattresses, with children sleeping on mats beside them.

"When it's full, you have to walk over patients when you do your rounds," one nurse said. "And you have to fill bottles with water to wash your hands."

The toilets are out of order, so patients must use the great outdoors.

Staella Mboumba, an executive in her 30s, calls herself a "manganese baby" -- born, raised and married in Moanda, where she now has a high-paying job with COMILOG.

But, she admits, "Before, the city was peaceful, quiet and clean. It was a little paradise. But it's no longer all of that."

Company spokesman Andre Massard dates the change in conditions to 1997, when the city stopped a longstanding tradition of appointing a COMILOG employee as deputy mayor.

In that role, the employee "was very involved in the management of the city," Mansard said.

But at around the same time, development projects began to evaporate, and, Mansard said: "We saw the city decline."

Many residents on the outskirts of Moanda have no running water or mains electricity. By STEEVE JORDAN (AFP)

COMILOG launched a three-year "social responsibility" plan in 2018, prioritising upgrading the main road, then rehabilitating the schools and providing broadband for 8,000 pupils, as well as humanitarian aid to the city's poor.

Massard acknowledged that the sum represents less than one percent of the company's turnover.

He noted that nearly 3,500 people are employed in support jobs for COMILOG such as cooks, drivers, cleaners and other sub-contractors.

But residents and local elected officials demand more. "The company should have thought a little earlier of doing what it is doing now. There's a lot left to do," said Mayor Bernard Moulonda.