The rape of Ghana/US democracies 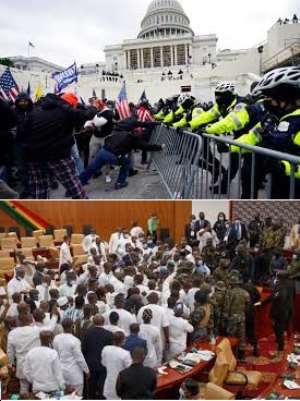 What a week that was, when the American and Ghanaian legislative cathedrals – seats of democracy, were desecrated and are now in need of re-consecration to restore their sacrosanct status.

The details of the desecration were flashed round the world through the traditional and social media, but the summary below by President Mahama exposes the real horror confronting Ghana:

“…Everything that is wrong with our democracy under this President [Akufo-Addo] played out in Parliament that night. Snatching of ballot papers, attempting to disenfranchise voters by getting the Assin North MP out of the chamber, attempting to compromise the secrecy of the ballot, the entry of the military into the chamber. That is an abomination, it makes us look like a banana republic. Because you [MPs] were there, and you were emotionally charged, I am sure the infamy of that event did not strike you but when you see it on TV again, you will see how low our democracy has sunk under this presidency.”

Much worse was being enacted in the US Capitol. Propitiously, I have noticed that both America and Ghana are striking back at those responsible for the desecration, to establish not only law and order but also bring back the integrity, honour and dignity of democracy.

The Americans do not waste time on such matters (even though in the past four years, they allowed the inspiration of the desecration – Donald J. Trump – to get away with many other outrages) and have started picking up the culprits to face the law. They have in custody the idiot and others like him, who invaded House Speaker Nancy Pelosi’s office and had his picture taken sitting at her desk. The Chief of the Capitol police and the bosses of the HoR and Senate security have also resigned.

And yes, I am wondering when we will also pick up the idiot here who stole ballot papers during the balloting for the Speaker of our parliament, and the resignations of the Clerk of Parliament and the security boss. I have noted with disquiet the way the whole caper is being handled by some Ghanaians as a joke between Ahenkorah and Muntaka. I do not find it funny at all, though I salute Muntaka’s courage and speed in apprehending the criminal and protecting our democracy. And who can forget the most ridiculous and disgraceful image of Ursula Owusu (NPP MP), a married woman and one of Akufo-Addo’s most strident apologists, sitting on the laps of a man – not her husband – because according to her, during the last parliament that was where she sat! Bush!

Professor Jeffrey Sachs, writing on the mob attack on the US Capitol said, “The aim was to intimidate Congress into stopping the peaceful transition of power. This is sedition, and in stoking it, Trump has committed a capital offense.” Most applicable here too. Ahenkorah and those who inspired him or put him up to it were trying to stop our peaceful parliamentary transition and so have committed the same crimes Professor Sachs is talking about.

The US capitol policemen and women who came to the defense of the capitol when the Trumpian mobs besieged congress, are appropriately receiving the plaudits of a grateful nation, Ghana also has to recognize our own as national heroes. In the US, they have started working on a second Donald Trump impeachment process and/or invoking the 25th Amendment to relieve him of the office of president.

Similarly, in Ghana, some people, including lawmakers, are fingering Nana Addo-Dankwa Akufo-Addo as the instigator, and like his counterpart in the US, must face the utmost sanction – but there may be a little difficulty there, because the majority in parliament does not recognize him as president so as to be able to serve him with any impeachment papers! Both Trump and Nana Addo may be looking up to time to intervene. Time because Trump has only ten or so days left for him to vacate the house on Pennsylvania Avenue and in Ghana there’s already a process in the SC that will likely see Nana Addo packing from the house on Liberation Road. It’s all a matter of time!

Just like Trump, he brought it on himself. The impunity was just too much. The two men were behaving as though a presidential mandate meant ownership of their respective republics and could therefore behave like Roman emperors. Amazingly, they even share a little curiosity: A self-proclaimed man of prophesy, one Owusu Bempah who had boasted that his intervention for Trump would defy the inevitable and deny Joe Biden the US presidency! In fact, he even claimed Trump’s people were in touch with him in that regard…

Nana Addo planted the seeds of his own infamy when he dismissed the chair of Ghana’s electoral commission, Madam Charlotte Osei and brought in Madam Jean Mensa in mid-2018 to skew the electoral process in his favour. From then on, it was the proverbial slippery slope downhill culminating in a flawed election and the outrage in parliament on January 6/7 2021.

The invasion of our parliament by heavily armed battle-ready soldiers that night was as treasonable as the happenings in congress with armed thugs forcing their way into the House. Quite a number of them have been caught on cameras and the sifting should be swift to cauterize the menace such vile mindsets pose to democracy on both sides of the Atlantic. The US Capitol in Washington DC is now technically a crime scene, so in fact is our Parliament House. But how could things have come to such a nasty head both in the US and Ghana?

The NPP claims Republican Party (US) and Conservative Party (UK) affiliation, even attending their congresses as guests. In November 2016 as the Republicans celebrated a Trump victory, the NPP also jubilated over a Nana Addo-Dankwa win in December. Whether it was Nana Addo picking pages from the Trumpian “leadership” style or the other way round, these two men were quite in step over almost everything during the past four years.

Just as Trump considered himself a master of all he surveyed in America, Nana Addo thought same about himself in Ghana. Four years is not such a long time for us to forget that one of the very first actions of Nana Addo in 2017 was to blast Ghanaians in a radio and television broadcast because citizens were demonstrating peacefully against the siting of a US military base in Ghana. He described compatriots as hypocrites and anti-American! Really? To placate Trump?

Marching in tandem with Trump, it’s been a mixture of Trump’s pseudo-Christian proselytizing and racial (ethnic) bigotry, plus heavy doses of undermining of vital state institutions, including the security services, the electoral process, the judiciary and others.

Trump’s US and Nana Addo’s Ghana have been so poisoned and polarized by their politics of exclusiveness, vindictiveness and bullying, that, unless we the people register our disapproval vehemently, worse may yet be ahead. Leadership must be a moral rallying point to guide all of us to uphold and protect our system of governance – democracy – not the aggrandizement of an individual. For Trump’s supporters, lies became truths which translated into unacceptable deeds.

In Ghana, it became quite clear that it was not Ghana’s democracy that Election 2020 was seeking to advance but Nana Addo’s personal political advancement, so all the odds were stacked in his favour. The doctrine of “All Die Be Die” was operationalized and by the time Election 2020 was over, 7 Ghanaians lay dead. Along the way we had Ayawaso West Wuogon, mayhem in a Kumasi High Court, murder of Ahmed Suale, etc. In all of these, Nana Addo, like Trump, exhibited little or no empathy at all.

In both Ghana and the US, it boiled down to two incumbents’ cynical exploitation of the electoral system to hold on to power. In the US, Trump would not respect the will of the people and kept peddling unfounded allegations leading to the mob attack of December 6. In our case, Mr. Akufo-Addo’s apologists, have accused our slain compatriots of being criminals and deserving of no sympathy in an election without merit.

Tellingly, amidst all the gloom over Ghana, last Friday, Mr. Akufo-Addo and his cronies settled to some of the most ostentatious and extravagant parties to be held in recent times. Fiddling while Rome burned indeed. Trump will be out in the next ten days as we hold our breaths for our election petition to see its day in court in the coming days, weeks and possibly months…

Be that as it may, the toxic cults of personality that have grown around Trump and Akufo-Addo, cloaked in the garb of democracy have wounded these societies more than direct military coups d’etat. In our case the doctrines of “All Die Be Die” and “Onka yer who” (which I picked years ago from a critique on the NPP by an NPP supporting journalist) means that all the time, not far from the surface, is the threat of violence and political exclusiveness. The flaws and violence of Election 2020 and the rape of our parliament are but pointers to a possible lasting damage.

For both Ghana and the US, these election-related tremours also provide opportunities. A time, as Colin Powell put it in an interview with Fareed Zakariah on CNN, for “healing and accountability”. Two words, that can only be of use in the hands of leaders, citizens and institutions (with claims to social/moral uprightness) that can free themselves from the emasculating orbits around the cults of personality. We have been in short supply of such leaders, citizens and institutions these past four years…Ghana Awake! Ghana Arise!