Bawumia is bound to lead the NPP in 2024, but Alan is the saviour 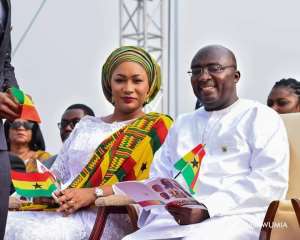 The NDC has used any chance they have had to reply Dr. Mahamadu Bawumia to remind the whole nation on how the NPP is using him for propaganda and would later drop him for an Akan candidate to succeed president Akufo-Addo. The NDC believe that NPP will never allow a Northerner or Muslim to lead the party. They always remind the nation of how Aliu Mahama failed to secure the votes of the delegates and how Afoko was removed after he was voted as the national chairman. In fact, a section of Ghanaians doubts whether Bawumia would be elected the presidential candidate of the NPP despite his relevance in contemporary Ghanaian politics. He would be ignored for an Akan candidate as the main opposition party has so well propagated for many Ghanaians to believe. In opposition, the party’s delegates voted for Afoko to lead the party as the national chairman and in government, they will equally choose the vice president Bawumia to lead the party as their presidential candidate for the 2024 general elections. This is bound to happen and the NDC would be proved wrong. The novelty of Bawumia’s candidature would endear the party to the floating voters.

Incidence in the political arena in the country since Dr. Bawumia became the vice-presidential candidate to the NPP’s candidate, Akufo-Addo have all worked in favor of Dr. Bawumia leading the NPP in 2024. A man who received a cold welcome as a novice in NPP and Ghanaian politics has learned the game so fast and so well that, he has become a household name in Ghanaian politics. The Bawumia factor cannot simply be ignored. The sterling performance during the election petition in 2013, the various public lectures, his visible performance as vice president and the Bawumia factor in the 2020 election, especially, in the regions of northern Ghana, the zongos and the settler communities have made Bawumia the inevitable presidential candidate for the next general elections in 2024. Mr. pink sheets, you and I were not there, Mr. digital are some of his popular accolades.

Many Ghanaians believe he has outperformed all vice presidents in the fourth republic. His tech-savviness has been brought to bear in the Akufo-Addo led government. His visibility, vibrancy and dedication to digitizing the Ghanaian economy and operationalizing various initiatives has received admiration and goodwill from many Ghanaians. The growing affection towards vice president Bawumia signifies he is bound to lead his party in 2024 and the party delegates cannot afford to block his ascendency to the throne of President. The democratic principles of the Danquah-Busia-Dombo tradition would be upheld again at the primaries through voting, but Dr. Bawumia is bound to lead the party. The cost of proving the opponent right that NPP will never allow a Northerner/ Muslim to lead the party would be so damaging to the party for many years to come.

Samira Bawumia, the wife of Dr. Bawumia is also a very powerful campaigner. She dazzles whenever she mounts the campaign platform. Besides Nana Konadu Agyemang Rawlings, no spouse of a presidential candidate or vice-presidential candidate has been as eloquent as Samira on political campaigns. She remains that beautiful, youthful and exuberant lady, who is ever ready to shake the nation with her husband with their powerful campaign messages. Should the former president Mahama and his vice-presidential candidate Jane contest again in 2024, Mrs. Bawumia would be very instrumental in her husband’s campaign. She could compete for space with the woman vice-presidential candidate of the NDC. No other spouse of the other main NPP contenders could match Samira. She would also be very excellent first lady following how well she has partnered the first lady, Rebecca Akufo-Addo, in the advancement of Ghanaian women and children. Her beauty and fashion would only be comparable to Michelle Obama. This is only a plus to her.

The NDC has challenged the NPP on several occasions to make vice presidents the successor of the outgoing president if indeed the party believes in them. In the NDC, Vice president John Evans Atta Mills succeeded then outgoing president Jerry John Rawlings through consensus or declaration at Swedru. The whole nation again witnessed how the NDC selected then Vice President John Dramani Mahama to be on their ticket for 2012 general elections when the sitting president died. On both occasions, consensus building was very instrumental, though not perfect. The NPP, on the other hand, have chosen its leaders through competitive elections, a democratic principle the Danquah-Busia-Dombo tradition is very proud of. This was the case when vice president Aliu Mahama contested the presidential primaries and lost. However, consensus must be built long before such election takes place as former president Kuffour admonished. In the wisdom of former president Kuffour, consensus must be built at a much earlier time before the actual race begins. When it is too late to build consensus, however, the party must allow for a free and fair election. This is very useful advice, especially, when there are more than one equally qualified key figures likely to compete against each other. Remnants of the fierce battle could play into the hands of the opposition. The NPP cannot wait till the presidential primaries heat up before attempt is made on consensus building. Starting early enough enables wider consultation of all stakeholders and allow for necessary trade-offs and all concessions to be made. Agreements between camps must be reached, concerns of the constituency of potential presidential candidates and to some extent, potential parliamentary candidates must be thoroughly addressed before the electoral processes finally begins.

Following the results of the 2020 general elections, increased votes from the Ashanti region and the northern regions would be very crucial to the victory of the NPP in subsequent polls. In this respect, Mr. Alan John Kwadwo Kyeremanteng as a vice presidential candidate would be a tsunami of votes in favor of NPP in the Ashanti region. Alan Cash, as he is popularly called, might be too big a personality to be a deputy to Dr. Bawumia, but the timing and the political environment would make it very practical and tactful thing to do. The huge constituency of Alan Cash supporters in the country, especially in the Ashanti region could translate into huge votes for the NPP. The force of unity in the NPP with this ticket would attract massive floating votes and even some supporters of the opposition. The NPP must win and that must be the singular objective. Alan Cash would be the eventual hero, because he would have sacrificed his presidential ambition for the NPP to make history. Alan the savior, the party would remember him for this golden gesture for decades to come.

Like Obama emerged on the political scene in the USA and won against more experienced politicians at the primaries and the presidential elections, so has Bawumia emerged in Ghana. Hillary Clinton seemed like the one in line of succession, but the time was ripe for the Obama. Similarly, Alan Kyeremanteng might seem the conventional candidate to come after Akufo-Addo, but the timing favors the vice president Bawumia to lead the NPP in 2024. Obama’s camp chose a more experienced politician, Joe Biden, who was seemingly from Mrs. Clinton camp to partner Obama to win the general election. It was a very formidable ticket against the republican candidate McCain with a lady candidate, Sarah Palin. When a consensus is successfully built, Alan Kyeremanteng may partner Bawumia to defeat John and Jane ticket in 2024 as Biden partnered Obama to defeat McCain and Palin ticket. In an event that Alan Kyeremanteng considers it not prudent to be the vice-presidential candidate to Bawumia, he may nominate Kwabena Agyei Agyapong to partner Bawumia. Alan’s constituency would have been still represented on the ticket.