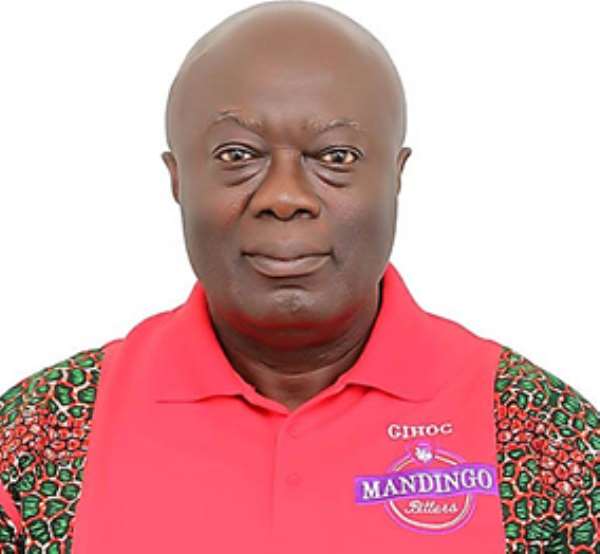 “Twinkle, twinkle, little star,
How I wonder what you are.
Up above the world so high,
Like a diamond in the sky.

When the blazing sun is gone,
When he nothing shines upon,
Then you show your little light,
Twinkle, twinkle, all the night.”

One recalls vividly, the lines of the above poem we used to recite or the lyrics of the above song we were singing in primary school days. This poem or song has been credited to an English Novelist, a Poet and Lyricist by name Jane Taylor who walked the earth from September 13, 1783 to April 23, 1824.

Borrowing rendition from the lyrics of this song or the lines of this poem, I choose to describe the current CEO of GIHOC Distilleries, Mr. Maxwell Kofi Jumah as a transformative twinkle, twinkle big star that shines significantly and productively over GIHOC. He has been the CEO of GIHOC since 2017. This article highlights his success story as the Managing Director (MD) of the state-owned Distillery Company called GIHOC, which was near collapse before Mr. Jumah was appointed the MD.

We will also briefly examine the supportive good works of the Meridian Water Brand Manager of GIHOC, Ms. Kate Bamfo. It is for no special reason but the fact that Meridian Water is one of the visible GIHOC brands and its performance on the market so far moves my heart.

Presently, Mr. Maxwell Kofi Jumah is the strategic thinking Managing Director of GIHOC Distilleries Company Limited (hereinafter simply referred to as GIHOC). He was born on June 26, 1950 and he comes from Amakom Antoa in the Ashanti Region. Mr. Jumah obtained Master of Business Administration Degree in Finance and International Marketing from the Rutgers University Graduate School of Management, USA) in 1983. In May 2001, President Emeritus J.A. Kufuor appointed Mr. Jumah as the Metropolitan Chief Executive (MCE) of the Kumasi Metropolitan Assembly (KMA) where he became a well-known MCE nationwide through hard work.

This Ghanaian politician and former lawmaker is now the dynamic and result-oriented MD of GIHOC. What at all is GIHOC and what did Kofi Jumah do to warrant my description of him as a transformational twinkle, twinkle big star of GIHOC?

GIHOC was established in 1958 (62 years ago) and at the time it was the first modern distillery in West Africa and it was solely manufacturing only alcoholic beverages. Under the National Liberation Council Decree (NLCD) 207, the state-owned Distillery Company became a division of the erstwhile Ghana Industrial Holding Corporation in 1968. In 1980, the Distillery and 15 other divisions of GIHOC were duly registered and incorporated as a Limited Liability Company. The mother company GIHOC closed down in 1993 and the law that established it was repealed in that year. Only the Distillery Unit of the former GIHOC survived the closure. It is equally called GIHOC and it remains a limited liability company. It is a giant in the alcoholic beverage industry not only in Ghana but also in West Africa. The company distils, refines, blends and manufactures variety of alcoholic beverages such as Schnapps, Castle Bridge, Takai, Brandy and others.

Currently, GIHOC is on a mission to “Produce and market high quality alcoholic and non-alcoholic beverages” while it envisions to be the “Most preferred alcoholic company returning great profit to its stakeholders.” In present times, the Company's major brands are Bitters (Herb Afrik), Gin (Castle Bridge) Brandy, Liqueur (Takai), Schnapps, Cocktail as well as Meridian Water and hand sanitiser. Around 2016, GIHOC was near collapse but it has been fortunately revived through the instrumental and transformational leadership of Mr. Maxwell Kofi Jumah, who may be described as the Company's Nehemiah twinkle, twinkle big star. 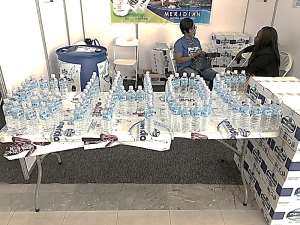 It is my personal coinage that a leader must not only show the way but he must also take necessary, timely and result-oriented actions on the way to transform existing situations for the benefit of humanity. In fact, there is no bigger religion than humanity itself and so far, Maxwell Kofi Jumah who is also referred to as Kofi Ghana has demonstrated that in diverse ways in his public life from KMA through Parliament to GIHOC. Methinks the degrees we obtain from schools are worthless if we are unable to apply the knowledge behind the certificates in solving societal problems and transforming worse situations into better ones in order to transform society. Kofi Juma's transformational leadership role at GIHOC is a living testimony. If the President Akuffo Addo who appointed Mr. Jumah and other discerning Ghanaians from afar are watching his good performance at GIHOC then why not recognise him with a national award in his life time and not posthumously so many years after?

Mr. Maxwell Kofi Jumah's coming to GIHOC as the MD has led to the revamping of GIHOC and the introduction of new products on the market. He equally reviewed the organizational structure to meet new trends on the market.

Talking about Meridian Water, a visible product of GIHOC, it was being produced by the Company in the past but it vanished on the market some 20 years ago. However, Mr. Kofi Juma re-introduced and repackaged the product and currently, it is one of the preferred mineral water brands on the market. The affordable Meridian Water now comes in water sachets, jar (dispenser) bottles, 500ml bottles and very soon, the yet to be opened Kumasi Branch of GIHOC will be producing 750ml and 1ltr bottles and 330ml bottles to be served some airlines. Suffice to say that GIHOC is heavily present in the beverage market of Ghana.

Under Mr. Jumah's leadership, GIHOC outlets that are called GIDI shops increased in number from the previous two in Accra and Kumasi to eight with six different GIDI shops in Sefwi, Koforidua, Ho, Sunyani and Asafo Branch in Accra.

Just like the mother Company, the Asofa Branch of GIHOC was equally at its knees before Mr. Maxwell Kofi Jumah became the MD of the Company in 2017 but now, Asofa is producing significant product numbers. The Kofi Jumah twinkle, twinkle big star impact increased production of the Asofa Branch from 200 bags of sachet water per week to 500 bags a day and all the 500 is sold within 24 hours. Mr. Jumah equally introduced bottled water production at the Asofa Branch and 1000 packs of bottled water is produced a day at that Branch of GIHOC.

In order to expand the Company and for that matter production, GIHOC under the superintendence of the forwarding thinking Kofi Ghana bought a folded private company in Kumasi, revamped it to become the Kumasi Branch of GIHOC and that Branch will soon start operations possibly in January 2021.

In addition to introducing new products at GIHOC, the Former KMA Boss, now MD of GIHOC Maxwell Ghana Kofi Jumah revamped the Company's clinic, which was virtually non-existent. He seems to say that the employees are the most valuable Company resource so the MD must take their healthcare needs seriously.

Eating good food and healthcare constitute a tapestry of good health hence the forward thinking MD equally revamped the Company's staff canteens and even eats there himself.

Perhaps in tandem with the assertion that the hope of a reward sweetens labour, Kofi Ghana increased the salaries of the production staff from as low as GHS250.00 per month to about GHS1000.00 a month aside certain allowances. It is thus not surprising that his workers are working so hard for him. A CEO that is not selfish moves the workers along a productive trajectory and that is exactly what Mr. Jumah is doing.

As if the foregoing achievements were not enough for the Amakom Antoa born transformational leader called Mr. Maxwell Kofi Jumah, he again introduced the Brands Manager concept as part of a review of the Company's organizational structure in order to stay competitive on the market. Various products thus have respective Brands Managers. For Example, Meridian Water has a Brand Manager and same applies to hand sanitiser. Presently, GIHOC exports its products to the neighbouring countries as well as to Kenya, Tanzania, Burkina Faso and Nigeria.

In order to handle legal suits with capacity from within the Company, Mr. Jumah established a Legal Department for the Company.

Mindful of the numerous achievements enumerated, it is not surprising that GIHOC was adjudged the Best Manufacturing Company in 2019 at the Ghana Manufacturing Awards Ceremony. The MD himself was also recognised as the Best CEO for 2019 aside the fact that he emerged as the most respected CEO in Ghana in 2019.

During this COVID-19 pandemic, GIHOC acted swiftly and started producing sanitisers at affordable prices and in 2020, Ghana Manufacturing Awards adjudged GIHOC as Sanitiser Manufacturing Company of Ghana and also the Best Herbal Liquor producer of the year 2020.

If not for the winner takes all syndrome in Ghana politics, a transformational CEO like Mr. Maxwell Kofi Ghana Jumah should have been retained as the GIHOC CEO for some years to come irrespective of the political party in power so that he can raise the GIHOC banner higher than he has done so far. It is rather sad that even highly performing CEOs of Mr. Jumah's calibre are changed whenever a new political party comes to power. 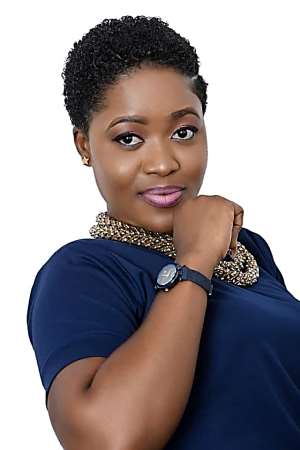 One of the mountain moving employees of GIHOC who supports the Maxwell Kofi Jumah transformational twinkle star agenda in the Company is Ms. Kate Bamfo who is currently the Brand Manager for the Meridian Water. Ms. Bamfo holds BSc. Human Resources Management from the Pentecost University and she joined GIHOC about two years ago.

She had earlier worked in a mining company and upon obtaining her first degree, she did her National Service at the Achimota Hospital Administration. Just like her boss Kofi Ghana, Ms. Bamfo is a workaholic and down to earth.

Prior to the time Ms. Bamfo joined GIHOC, the packaging cartons for Meridian Water were not branded but through her instrumentality and working in unison with other team members under a transformational MD, the cartons are now beautifully branded to attract the consuming public. The Meridian Water Brand Manager was equally instrumental in the introduction of the GIHOC jar (dispenser) bottles.

As a matter of fact, until Ms. Bamfo introduced Meridian Water to my workplace about a year ago, I did not know that GIHOC was producing mineral water let alone knowing its name as Meridian. The Company supplies water to organizations with flexible payment terms. I am compelled at this juncture to call on all public organisations in need of mineral water to buy Meridian Water from GIHOC.

Recommendations to GIHOC MD and the Management Team
Mr. Maxwell Kofi Jumah, I hope this article gets to your attention. If it does, then I suggest you work on the following recommendations.

Conclusion
On this note, I commend Mr. Maxwell Kofi Jumah and his estimable team of experts at GIHOC. May the Lord God shine his Glorious Face more favourably on your efforts and your lives.

Stiffer sanctions needed to punish persons who engage in tax...
1 minute ago