Terrible beauty: the Turkish prison artwork of Zehra Dogan on show in Istanbul 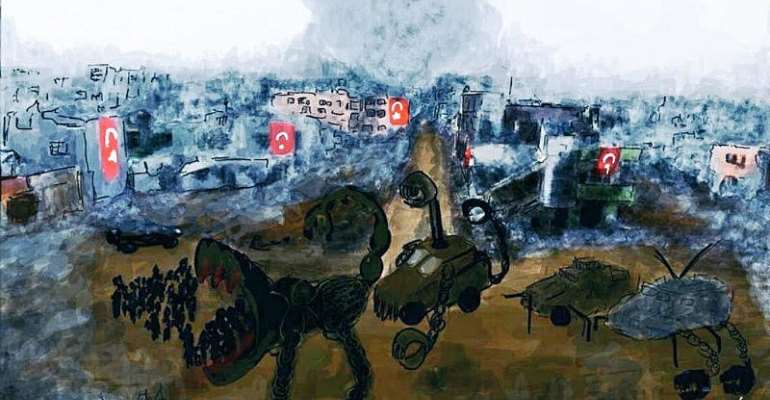 Zehra Dogan, a 31-year-old Kurdish artist who spent almost two years in jail in Turkey, is earning growing international plaudits for her work. A recent exhibition in Istanbul of the work she produced while in prison marks the first time she has been shown in Turkey.

Some of the images which accompany this article are disturbing.

Dogan's deeply unsettling works combine themes of resistance and feminism. Her paintings have already won a series of European prizes and widespread acclaim. She has been exhibited at London's world-famous Tate Modern. What is most remarkable is that she created her artwork secretly while in prison.

"I can talk about hundreds of paintings I drew, and the prison authorities confiscated only 30. They told me they 'destroyed' each one of them because it's forbidden," explains Dogan.

Being in prison enriched her work, forcing her to innovate.

"I had to use materials outside the normal realm of art, like menstrual blood, hair, prison bedsheets, shopping lists, electricity bills," she says. "Combining both art and factual documentation, I could incorporate both my feminist and journalist identities to create these works."

Dogan's work was smuggled out of prison. But she's guarded on explaining exactly how, saying she doesn't want those who helped her to face reprisals. But reportedly, one way was through the prison laundry.

Dogan served nearly two years in prison on terrorist propaganda charges for her picture depicting the destruction of a town by Turkish security forces in its war against the PKK Kurdish separatist group.

Famous artists, including Banksy, joined an international campaign for Dogan's release. But while Dogan became a global focal point of Ankara's crackdown on dissent, few people in Turkey are aware of her work.

Given Dogan's terrorist conviction and the fact that her artwork was created in prison, no art venue in Turkey dared to display Dogan's work.

"People who came here, the first reaction was: 'This is the first time we are seeing the Zehra Dogan artworks, and it is really deep.' Now we can talk about her artworks," said exhibition curator Seval Dakman.

"This is the first chance in Turkey; I think because of only this reason, it was important because Zehra met with an art audience for the first time in Istanbul," she added. "And now many people are talking about her artworks and its politics. Why it is political, why it is about women's rights."

Most people attending the gallery didn't want to talk and appeared nervous about visiting.

"When I saw her exhibition opening, I wanted to come and see it. She did these artworks in prison, in hardship, without having any art material whatsoever," said a young teacher who wanted to remain anonymous.

"There're works made with menstrual blood and hair. It feels like a reflection of today's Turkey's political situation," he added.

"When we look at Turkey now, we see many people go through these hardships; being a woman is altogether another hardship in itself. I think she reflected on all this very well."

Dogan isn't able to savour the joy of her first exhibition in Turkey. With other charges pending against her, she now lives in exile in London. Dogan is about to work on a project with world-famous Chinese artist Ai Weiwei.

Dogan admits she feels the pain of exile.
"When I was imprisoned, I couldn't go out; I wasn't free. But my art being outside made me feel free in a way. Now It is a very similar experience; I can't go back to Turkey, to my homeland, but my art is now there, and this takes me to Istanbul in a way as well. "