U/E/R: The untapped potentials of the Ghanaian pearl millet 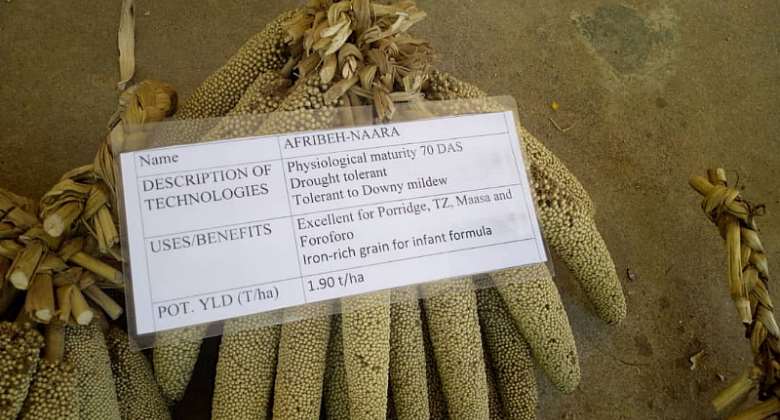 Pearl millet (Pennisetum glaucum (L.) R. Br.), is one of the most extensively cultivated cereals in the world, ranked sixth after rice, wheat, maize, barley and sorghum in terms of area under production with at least 30 million hectares of land used for its cultivation to feed about 100 million people in the world especially Africa and Asia of whom, majority are the poorest of the poor. In Africa, pearl millet is cultivated on at least 14 million hectares with an estimated annual grain yield of 10.4 million tons. Countries such as Burkina Faso, Chad, Nigeria, Niger, Mali, Mauritania and Senegal are considered as the major producing countries in West Africa, accounting for over 80% of the 14 million hectares under pearl millet cultivation.

In an interview with a PHD Candidate working on micro-nutrient in pearl millet grain Asungre Peter indicated that in Ghana, it is grown mainly in the northern parts with Upper East and North East regions being home to the early and late maturing types respectively. Pearl millet has carved a niche as a sustainable food security crop for farmers living on marginal environments, characteristic of northern Ghana, where other cereal crops such as maize and rice fail. The early maturing type matures within 65-70 days from sowing , making it gained the accolade as the ‘poor man’s crop’ or ‘hunger breaker’, as it is the first cereal crop to be harvested during the main season thus serving as a food security crop during mid-July to late August each year. Though grown mainly as a food crop, the stalks of Pearl millet are used variously as fodder, roofing and fencing materials or source of saltpetre for cooking traditional food. It is also used for some important traditional dishes such as Tuo-Zafi, Maasa (deep fried cakes), and Porridges in households. Millet products are fast becoming part of snack at most continental hotels

The grain of pearl millet contains appreciable amounts of micronutrients especially Fe and Zn compared with cereals such as maize, rice, wheat and sorghum. The protein content (11%) of millet is not only high, but of exceptionally good quality; the lysine content is reported to be 3.68 mg/g protein compared to 2.24 for wheat, 3.36 for rice, 3.0 for maize, and 3.2 for sorghum. Reports show that close to three billion people are currently suffering from micronutrient malnutrition, of whom majority are from Asia and Sub-Saharan Africa. Whiles WHO estimates that close to 11 million children die globally from Fe and Zn and Vitamin A deficiencies, Ghana Health Services reported in 2017 that two out of every three children in Ghana suffer from Fe and Zn disorders. Iron deficiency-induced anaemia (IDA) is common in children and menstruation women as well as during child birth where there is loss of blood. Prolonged deficiencies of iron and vitamin A for instance, can lead to stunting and permanent brain damage in humans. To overcome these challenges measures such as food fortification, pharmaceutical, and dietary diversification have been employed in the past but these have their own limitations. The current trend is biofortification through breeding and agronomic work. Biofortification entails a breeding process that fixes the desired trait in the crop that makes it permanently in the final product for the direct benefit of users. In the case of micronutrient, biofortification the iron and zinc levels become high in the proposed final product – seed.

Mr. Asungre added that, yield of pearl millet on farmers field in Ghana are below 1.0 ton/ha even though research shows that yields can be as high as 2.1 t/ha. According to the latest report by Ministry of Food and Agriculture (MoFA, 2018), the country saw an increase in millet yield from 155,810 MT to 168,020 MT (2.52% rise in production) between 2013 and 2018 cropping season. Unlike Pearl millet which can fit well into any cropping system, Maize, Rice and Cowpea lend themselves to mono-cropping system for higher yields and crop performance. However, a review of the state of plant and genetic resources for food and agriculture suggest that Ghana could be under threat of food security if this trend where maize, rice and Cowpea are fast replacing millet continues. Recent agricultural policies interventions in Ghana such as Planting for Food and Jobs (PFJ) favour so much the production of crops such as maize, cowpea, rice and soyabean to the neglect of sorghum and millet. The continuous recycling of seed of land races have led to reduction in average yields of pearl millet on the farmers’ field thus making it unattractive for them to continue to crop it. It was in the light of these that the pearl millet breeding program rolled out activities geared at developing, testing and releasing improved varieties that will address the food insecurity currently and lack of improved seed facing the country. This led to the released of five early maturing millets varieties in 2015 (Kaanati, Akad-kom, Naad-kohblug, Afribeh-naara and Waapp-naara). Currently, these are being grown by many farmers in the Upper East region and some communities in Northern, and Upper West Regions. Some seed producers have also expressed interest to produce both foundation and certified seeds in these regions.

He however hinted that, the research is currently targeting high grain yield, high grain zinc and iron content, tolerance to downy mildew, and bird resistant varieties through introgression and introduction. The breeding work to improve the iron and zinc content of the local materials as well as the recently released varieties, is in its advanced stages and it is hoped that in the distant future, new varieties would be released and popularized in the country. If millet is well incorporated into the diet of the people, it may also go a long way to support government reduce the importation of micronutrient supplements such as folic acid, zinc and iron for pregnant women and lactating mothers. The daily iron requirement of women in Ghana can easily be met with daily or regular consumption of millet-based diets. There are evidence from other countries, especially India, that when a child is fed on the improve early millet for six months, the Fe and Zn levels requirement will be adequately met as compared to any other baby food.

Mr. Asungre emphasized that, the use of residual as well as early rains to grow crops is catching up with many farmers in northern Ghana. Due to limit agricultural land availability, farmers are encouraged to practice crop intensification where many crops are grown on the same piece of land at the same time for maximum returns from the land. Pearl millet farmers can take advantage of this system to practice relay cropping where millet can be proceeded by maize, sweet potato or vegetables such as tomato or watermelon, or inter-cropping with other cereals or legumes. This will obviously lead to increased income to farm families for a better living. The current fertilizer and seed subsidy extended to farmers excludes millet. However, given its nutritional importance and as staple food source in the five regions of northern Ghana as well as its role as a climate smart crop, there is the need for this to be reconsidered as it has the potential to disincentivized millet farmers in the regions. This could lead to the extinction of the crop. A policy directive to refocus research to fully tap the potential of the pearl millet crop for food security and economic growth is not be a wrong move by the relevant authorities.

National Security needs cleansing with parazone; it's saddle...
22 minutes ago