By Daniel Woolls with AFP Bureaus 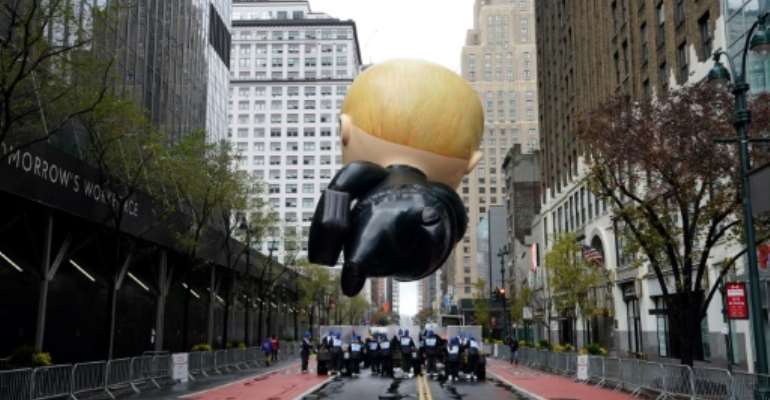 The "Boss Baby" balloon floats during an uncharacteristically subdued Macy's Thanksgiving Day Parade in New York on November 26, 2020. By TIMOTHY A. CLARY (AFP)

Millions of Americans defied Covid-19 guidelines Thursday to spend a subdued Thanksgiving holiday with family and friends, while questions emerged over the level of protection that one potential vaccine offers.

About a million people were screened at US airports each day over the last week, as many appeared bent on enjoying one of the country's biggest annual celebrations.

The exodus came despite warnings that mass travel threatens to significantly worsen the pandemic in the country hit hardest, with a six-month high of more than 2,400 deaths registered in the US in just the past 24 hours.

President-elect Joe Biden offered a message of hope, however, in a Thanksgiving video address that rallied Americans to pull together to defeat the outbreak. 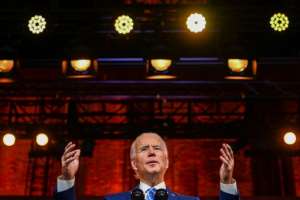 US President-elect Joe Biden delivers a Thanksgiving address at the Queen Theatre in Wilmington, Delaware, on November 25, 2020. By CHANDAN KHANNA (AFP/File)

"I know better days are coming, I know how bright our future is. I know the 21st Century is going to be an American century," he said.

British pharmaceutical giant AstraZeneca, one of three firms that have reported their vaccine to be ready, said Thursday that further research was needed after questions emerged over the protection it offers.

But US scientists said the higher rate came during tests in people aged 55 and under.

Vaccine breakthroughs have raised hopes for an end to the outbreak, though much of the world faces a gloomy winter dampened by lockdowns, economic anxiety and devastating loss.

Anthony Fauci, the top US infectious disease expert, said he was expecting "a surge superimposed upon a surge" caused by the big holiday getaway. 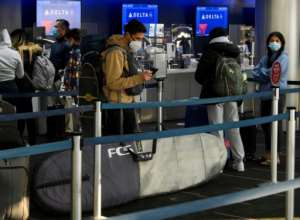 Passengers wait in line to check-in for Delta Air Lines flights at Los Angeles International Airport ahead of the Thanksgiving holiday in Los Angeles, California, on November 25, 2020. By Patrick T. Fallon (AFP/File)

President Donald Trump, for his part, spent the day golfing at a course he owns in Virginia, taking time out to attack Biden's record-setting winning vote count in the election earlier this month.

Globally, more than 60 million infections and 1.4 million deaths have been recorded since the new coronavirus emerged in China late last year, according to a tally compiled by AFP from official sources. 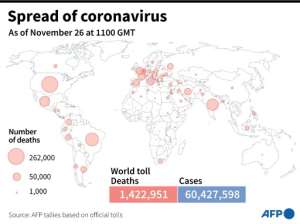 Despite the burst of travel in America -- still far below last year's Thanksgiving numbers -- pandemic restrictions meant that there was a resolute, stoical undercurrent to this year's festivities.

The Macy's Thanksgiving Day Parade in New York, a cherished tradition nearly a century old featuring giant balloons and colorful floats, went ahead in a truncated made-for-TV celebration across just one city block, with no crowds and much of it pre-recorded.

Biden described how he normally travels to the New England coast for a big family feast but would be staying home in Delaware this year for a small get-together. 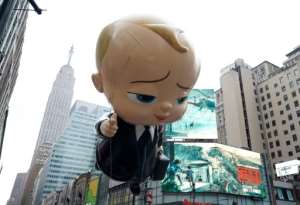 The "Boss Baby" balloon during the Macy's Thanksgiving Day Parade in New York on November 26, 2020. By TIMOTHY A. CLARY (AFP)

"I know this isn't the way many of us hoped we'd spend our holiday. We know that a small act of staying home is a gift to our fellow Americans," he said in his video message, posted to social media.

On radio and TV, chefs have been making suggestions on scaling down meals for smaller gatherings, or even sharing bits of what they cook and leaving it on the doorstep of friends and family, so it at least feels like a shared meal. 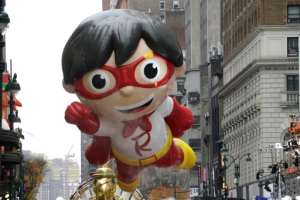 The "Red Titan" balloon floats during the Macy's Thanksgiving Day Parade in New York on November 26, 2020. By TIMOTHY A. CLARY (AFP)

The New York Times asked readers to state in six words or fewer what they were grateful for and published some of these lines, as Americans tried to make the best of the holiday.

"A furtive hug with a friend," one entry reads.

"Windows have never been so important," said another.

Trump's White House has urged "all Americans to gather, in homes and places of worship," despite the health risk.

But Biden has been calling on people to hunker down and keep observing health guidelines until a vaccine becomes available. 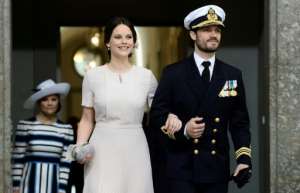 Sweden's Prince Carl Philip and his wife Princess Sofia are in self-isolation after testing positive for Covid-19. By Maja Suslin/TT (TT News Agency/AFP/File)

While low-income frontline workers often face the biggest risks from the virus, it has also run rampant among the world's wealthiest and most powerful.

On Thursday, Sweden's Prince Carl Philip and his wife Princess Sofia went into self-isolation after testing positive for Covid-19, the palace said.

With Britain and France talking about easing their lockdown measures soon, Russia is still resisting stay-at-home orders despite registering record infections and deaths from the virus Thursday.

Countries that have had strong success against the virus are also cracking down on new outbreaks.

South Korea closed bars and nightclubs this week as it braces for a third major wave, with virus cases at their highest level since March.

"With some exceptions, governments have made great efforts to put the wellbeing of their people first, acting decisively to protect health and to save lives," Pope Francis said in an op-ed in the Times.

"The exceptions have been some governments that shrugged off the painful evidence of mounting deaths, with inevitable, grievous consequences. But most governments acted responsibly, imposing strict measures to contain the outbreak."