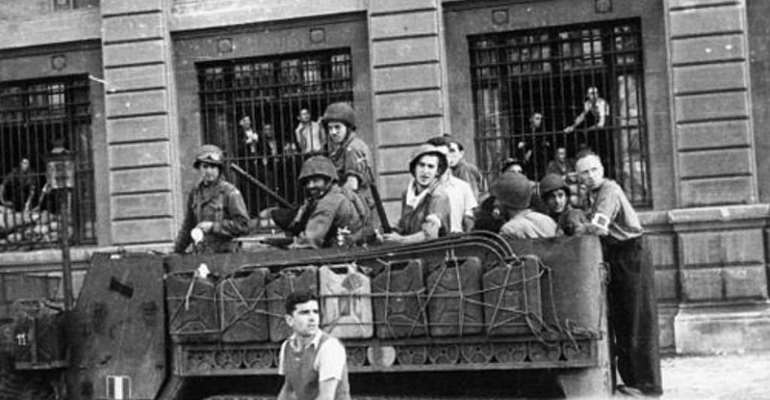 The French President has hailed the memory of a female resistance fighter who died in Switzerland on Monday at the age of 100. Noella Rouget was famously known for pleading to spare the life of a Nazi collaborator who faced the guillotine.

The news of her death comes ahead of a state funeral planned for another resistance fighter, Daniel Cordier, on Thursday. Macron hailed Noella Rouget as "a supporter of freedom who was the supreme incarnation of the values of fraternity and forgiveness," in a statement issued by the Elysée palace on Monday.

Noella Rouget died in the Swiss city of Geneva at the weekend, where she had been living since the end of the second world war after surviving internment at the Ravensbrueck concentration camp.

Known as Noella Peaudeau at the time, she was only 20 years-old when she joined the French Resistance, helping to transfer parcels and weapons for French fighters as well as British intelligence.

"Homage to Noella Rouget, the deportee who forgave her executioner, has died today at the age of 100," wrote the Memorial of Caen war museum on its Twitter feed.

She got engaged to fellow Resistance activist Adrien Tigeot in 1943 but they were then both denounced and arrested. Tigeot was tortured and then shot dead within days.

Despite this tragic event, she ended up urging leniency in the 1965 trial of Jacques Vasseur, a French collaborator with the Nazis and member of the Gestapo.

He was held responsible for 310 deportations, including her own, and 230 deaths, including that of Adrien Tigeot.

Death by guillotine
With Vasseur facing death by guillotine, Rouget turned to former Resistance leader-turned-president Charles de Gaulle to commute the sentence and in 1966 a term of life imprisonment was imposed instead.

Although she wrote to Vasseur regularly in prison, he never showed the slightest sign of repentance.

The Elysee said that her act of forgiveness was "all the more impressive as it was met by the hostile incomprehension of her contemporaries and the refusal of the culprit to repent" and had shown an "immense generosity of soul and unfailing humanism."

A state funeral has been arranged on Thursday at Les Invalides in Paris, where Emmanuel Macron, who knew Cordier well, will pay tribute in a speech.

"Daniel Cordier, the resistance fighter, the secretary for Jean Moulin, has died. When France was in peril, he and his companions took all risks so that France could stay France.We own them our liberty and our honour. We will pay a national homage to him," Macron wrote just after Cordier passed away on Friday.

“With him dies the living history of the resistance. He experienced what was one of our history's most explosive and painful times, but also the most heroic,” he said in a statement.

Cordier's death leaves 100-year-old Hubert Germain as the only fighter still alive among the 1,038 decorated by Charles de Gaulle as Heroes of the Resistance.