Jesus As “Konadu” In The Fight Against Corruption: My Preliminary Position On Mr Martin Amidu’s Resignation 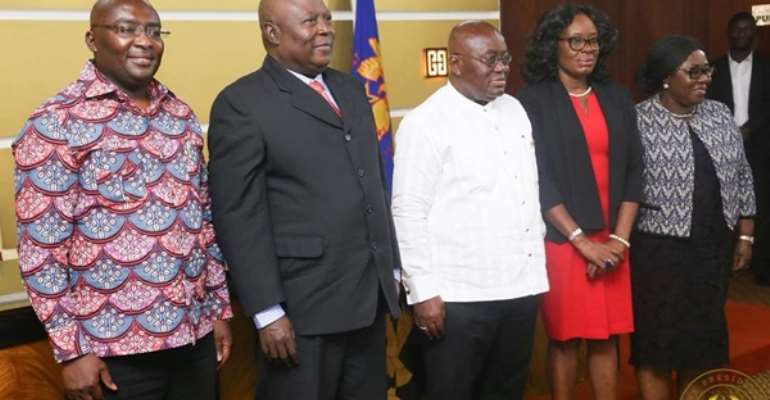 Corruption is real. Perceptions of corruption are equally real. And the fight against corruption must equally be real. Over the years, we have all concluded – and rightly so – that corruption is a major burden to our quest for socio-economic development.

In the days of decolonisation in Africa, many Africans were convinced that the problems we had were primarily because of the racial Other – the European coloniser. Our forebears and all of us who represent them today were/are convinced that once we get rid of the coloniser, we would develop.

Kwame Nkrumah, Ghana’s first president, even audaciously promised us that, once we got the political kingdom (political independence), everything else would happen – we will reach the Promised Land of prosperity.

Elsewhere in Africa, the same hopes were expressed. The message was clear: once the racial Other – the oppressor – was eliminated, we would reach our Canaan. It was not only politicians who were hopeful of the African dream. Some theologians also took interest in the indigenisation of Christianity to resonate with the political aspiration.

Indeed, shortly after independence, we witnessed sporadic infrastructural development. Roads were constructed; hospitals were built; more schools were established, and efforts were made to streamline the political economy. Laws were passed and symbols developed to fashion a unified state, as part of de-tribalising Africa.

But less than a decade into political independence, the hopes that birthed the decolonisation agenda started evaporating. Many people felt we had not yet reached the Promised Land. Perhaps, we have still not reached. This led to some scholars re-assessing the post-colonial state in Africa. In the case of Ghana, Ayi Kwei Armah wrote an interesting, but politically controversial novel: The Beautyful Ones Are Not Yet Born. The book decried the fact that Ghana had not yet reached the Promised Land – corruption stampeded us.

I personally think that we have not yet reached the Promised Land. As a country and continent, we are struggling with challenges such as poor sanitation and squalid living conditions, high levels of poverty, diseases, unemployment, low-intensity conflicts, and partisan politics. These challenges continue to take the wind out of our sail as a nation and continent.

But, perhaps, the root of our challenges remains corruption. Corruption appears to compete with deities in terms of its omnipresence and omnipotence. Corruption – of all kinds – can be found everywhere including the private and public spheres. This leads to virtually a universal acceptance that corruption is the root cause of all our challenges.

All this while, we all appear to know the answer to corruption. It is either we strengthen our institutions – which we have always known – or give the task of rooting out corruption to individuals with certain strong qualities and moral aptitude. I must say that because of the preponderance of corruption, we are prepared to offer cultic attention to any individual who promises to be the Messiah in the fight against corruption. This partly explains why, upon his appointment, Mr Martin Amidu was almost universally hailed across the nation. It also explains the tagging of our former president Jerry John Rawlings as Junior Jesus.

As an individual, my position is that we should see corruption, not necessarily as a political issue, but a moral one. This has been the position of one of Ghana’s renowned philosophers, Kwame Gyekye. As a moral philosopher, Kwame Gyekye maintained that corruption as a challenge should be considered a moral dilemma. As a moral challenge, individuals must demonstrate strong moral aptitude to fight it.

I agree with Professor Kwame Gyekye. And more so, as a Christian, I think Christianity offers the ultimate answer to corruption. In Christianity, salvation implies a total transformation of the individual. This transformation should influence the attitude of the Christian public worker. The Bible says that if anyone is in Christ, he or she is a new creation, all other things are gone.

This means that a Christian’s moral life should be impeccable. The person should live what he or she believes. The person should not make a distinction between private life and public lives. Both spheres should be saturated with the ethical values that Jesus Christ, the only God’s accredited Saviour of the elect, taught.

In terms of corruption, a Christian has to personalise the fight by asking the question: “Am I corrupt?” In many cases, we all hide behind the generalities by asking: “Are they corrupt?” With this question, we absolve ourselves of complicity in the fight against the canker.

But alas, it appears Christians in Ghana and Africa are as culpable and complicit in charges of corruption like everyone else. This leaves a paradox that must be answered. If Ghana is overwhelmingly Christian – at least people claiming to be Christians – why the pervasiveness of corruption in the country? When the Church of Pentecost, Ghana’s largest Protestant denomination, declared as its vision for the next five years, “Possessing the Nation,” their aim was/is to answer this question, by saturating the private and public spheres with Christian values.

In all of this, some of us felt that the president did well by appointing Mr Martin Amidu, as Special Prosecutor, to head the fight against corruption. I exercised conditional optimism about his appointment. This was precisely because I felt his success in the office was not automatic as it would largely depend on his ability to live above the normal to deepen the crusade against what we all know as the ultimate burden to our socio-economic development – corruption. He had to suffer from altruistic madness – really hating criminals.

Again, as a Christian, I saw Mr Martin Amidu, at the finite level, playing the role of Jesus Christ – who came to root out the ultimate corruption (sin) that led humans into all forms of depravities. Given the key role Jesus Christ had, He could not have failed. He had all excuses to have failed. Getting to the climax of His mission in the Garden of Gethsemane, Jesus, as Human, almost gave up. But looking at the glory that was awaiting Him, He persevered and ultimately conquered corruption (sin).

But the biggest question is what if Jesus Christ had failed? What if He had not been Ko na du – fighting to the end? Certainly, if that had happened, the history of the world would have been written differently and human lives would have taken a different course. If Jesus had failed, certainly, I would not have the hope of eternal bliss.

It is in this perspective that I find Mr Amidu's resignation unfortunate. Mr Amidu was put in an office to fight corruption. As the head of the Office of Special Prosecutor, I don't think Mr Amidu was expecting to find it easy in the fight against the canker. Corruption, as I have indicated, appears to have a divine nature. It is pervasive. It is universal. It is strong. It is difficult to fight. And it needs strong people to fight it, not those with talking ability.

I must say without any equivocation that Mr Martin Amidu failed himself, Ghana and Africa. He is NOT a hero. He was given a task that he knew was difficult to fight. He knew that the task he was given was one that requires his own touted discipline and uncompromising stance against moral laxity – corruption. He was aware that he was going to run in contra-direction to everyone else – including the president of the land.

To facilitate his work, Mr Martin Amidu’s office was given significant freedom from all forms of interference. As far as corruption is concerned, he was not to cow to any influence from all quarters. What perhaps even might have helped him in fashioning his own neutrality in the fight was that he does not belong to the ruling party – New Patriotic Party that appointed him. He is also not a darling of the National Democratic Congress. Impliedly, he could cut through with his sword against corruption in all directions without fear or favour.

In the end, Mr Amidu was called into the office to fight what he has always claimed to have a passion to do. He claims he could not live with criminals. And I guess most of us don’t want to live with known criminals. So, if indeed he could not live with criminals, why did he give in to pressure from alleged criminals? Leaving his office with no significant success after two years of “work” disappoints the nation. He has failed himself, Ghana, Africa and above all God, if he believes there is God. He cannot be our hero in the fight against corruption, because he lacked perseverance – ko na du.

To summarise my take on Mr Martin Amidu, I will say that the fight against corruption should be personalised and moralised. We must always ask ourselves: "Am I corrupt?" I am convinced that if we moralise and valorise the fight against corruption, we may succeed. We need a person with the character of the symbolic “ko na du” (fighting to the end or persevering to the end), not individuals who chicken out on some loose excuses.

In life, no one becomes a hero with excuses, for there are always excuses to free us from a difficult task. What will make us heroes is when we dare the consequences and fight to the end – ko na du. Even Christianity is about fighting to the end (Matthew 24:13).