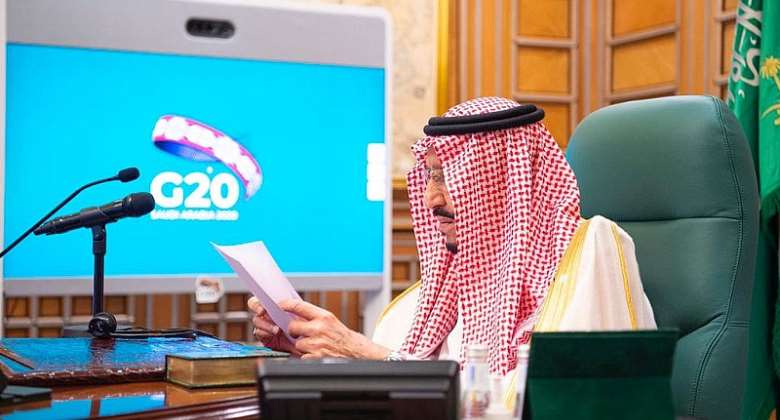 World leaders are to gather -- virtually -- for a G20 summit organised by Saudi Arabia, with the handling of the coronavirus pandemic and the world economic crisis high on the agenda. It's the first time an Arab nation has hosted the meeting, and campaigners see it at an opportunity to draw attention to the plight of jailed human rights defenders in the country.

In a bid to liven up the event, which takes place in a gloomy global atmosphere, Saudi Arabia's King Salman hosted an evening musical gala on the eve of the event and projected a group photo of the world leaders onto the ruins of the historical town of Diriyah, close to the capital Riyadh.

World leaders will spend most of their time discussing international efforts for a large-scale roll out of Covid-19 vaccines after a breakthrough in trials, and address the need to plug a $4.5 billion funding gap in the so-called ACT-Accelerator -- a programme that promotes an equitable distribution of the vaccines.

G20 nations have so far contributed more than 21 billion dollars to combat the pandemic, which has infected 56 million people globally and left 1.3 million dead, and injected $11 trillion to "safeguard" the world economy, organisers said.

Last week, the bloc's finance ministers declared a "common framework" for an extended debt restructuring plan for countries hit hard by the virus, but campaigners say the measure is insufficient.

The ministers had extended a debt suspension initiative for developing countries until June next year.

Rights abuses
Meanwhile, although not 'officially' said to be on the agenda, campaigners and families of jailed activists have staged a "counter-summit" in hopes of throwing a spotlight on the ultra-conservative kingdom's human rights record.

One of the most prominent Saudis in custody is 31-year-old Loujain al-Hathloul, a key figure in the campaign to allow Saudi women to drive who was arrested in May 2018 weeks before the kingdom lifted its ban on female drivers.

She has been on a hunger strike since October 26 when her parents visited her and found her to be "very weak and hopeless," said her sister, Lina.

PEN America, the literary group that defends free expression, called the online forum amid continued outrage over the 2018 murder of Washington Post contributor Jamal Khashoggi, who was strangled and dismembered inside Saudi Arabia's Istanbul consulate.

Khashoggi murder
"All of our relatives are in danger. They are facing the threat of what Jamal Khashoggi has seen on a daily basis," said Areej al-Sadhan, who says her brother, Abdulrahman al-Sadhan, was picked by up Saudi secret police in March 2018.

Senator Chris Murphy, a Democrat, told the counter-summit that he expected US President-elect Joe Biden to address human rights in Saudi Arabia and the kingdom's support for a brand of Islam that "forms the building blocks of global extremist movements."

"It is past time for us to recognize that Saudi Arabia is a deeply imperfect ally and that our priorities in this relationship have been long skewed in a way that, I argue, is not to the advantage of the United States in the long run," Murphy said.

Outgoing US President Donald Trump had aligned himself closely with Saudi Arabia, hailing its purchases of US weapons and hostility toward US adversary Iran.

But dozens of Democratic lawmakers urged the Trump administration to boycott the G20, seeing it as part of efforts for Saudi Arabia to rebrand itself without meaningful reforms.

"Instead of signalling its concern for Saudi Arabia's serious abuses, the G20 is bolstering the Saudi government's well-funded publicity efforts to portray the country as 'reforming' despite a significant increase in repression."

The gathering also comes at a time of deep political tension within the United States, with a doubt over whether or not Trump will address the attendees.

Not only has the country faced the highest death toll from the Covid pandemic, its leader has refused to concede a bitter election.

Ahead of the summit, European Commission President Ursula von der Leyen said she hoped the US would adopt a more multilateralist stance under Biden.

"We also expect of course new momentum from the new US administration" on climate change, reversing Trump's withdrawal from the Paris climate accord, she added.

Outgoing US Secretary of State Mike Pompeo, a staunch Trump defender, said he will be in Saudi Arabia on the second day of the summit as part of his farewell tour which included France earlier this week.