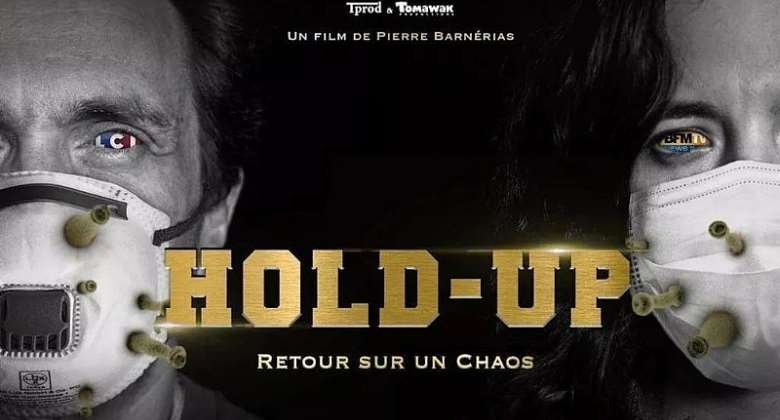 A French documentary that feeds on debunked conspiracy theories about the coronavirus pandemic is stirring up a political and social storm in a country battling to bring the health crisis under control.

Hold-Up, directed by former journalist Pierre Barnérias, claims to shed “new light” on questions surrounding the origin of the virus, which is still unclear, and supposed efforts by state powers to manipulate populations into believing false truths.

The film, which runs for almost three hours and was financed via crowd-funding, thrives on real-life controversies, such as mixed information that was given by health authorities on the usefulness of wearing a mask. It also claims that hydroxychloroquine is a proven remedy for Covid-19.

Bringing together a chorus of sceptics' voices, it calls into question sanitary measures taken in France and elsewhere to fight Covid-19 – concluding without evidence that there's a global plot to fool the public into believing the “hoax virus” is real.

Pride of place is given to those close to the extreme right and in particular to the US-based QAnon nebula, which believes President Donald Trump will save humanity from the dark aims of a secret world government.

As the authors seek to tell the “secret story” of Covid-19 – which is, they say, “little more than a flu”, a flurry of guests are brought in to drive home the “facts” – including the former French health minister Philippe Douste-Blazy, who has since distanced himself from the project.

In an interview with RMC radio on Monday, Douste-Blazy said he had asked to be removed from Hold-Up because of his opposition to the film's three main theses.

"First, that the pandemic has been known and predicted for 3, 4, 5 years,” he said. “That Bill Gates, boss of Microsoft…would take advantage of the pandemic to make money...and finally that the Pasteur Institute, one of the greatest flagships of world science, could have manufactured the virus."

Available for purchase online since 11 November, the film has generated huge interest – polarising the French public and drawing broad condemnation from French political ranks, NGOs and others.

Coralie Dubost, president of Emmanuel Macron's La République En Marche party, warned in a tweet: “Trap: 'Hold Up' is not a documentary; it's not journalism. It's plotting propaganda with a blockbuster budget, shamefully endorsed by a few wandering politicians.”

Since its launch, the film has been viewed more than 2.5 million times, while its trailer has been widely shared on social and messaging networks. On Friday, however, it was removed from several video platforms, including Vimeo.

Journalist Ivan Rioufol, who writes for the right-wing daily Le Figaro, said in a tweet that Hold-Up's “spectacular success” was an “expression of the rejection of the single thought imposed by the health order”.

Several French politicians and celebrities have, indeed, promoted the film as part of efforts to criticise the government over its handling of the pandemic.