Agyapa Royalties Deal Controversies: A Failure Of Law Or Governance? 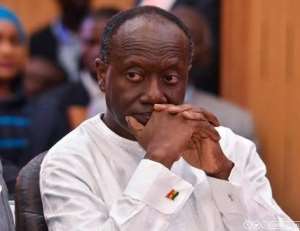 The controversies surrounding the Agyapa Royalties deal are occasioned by a fiasco of the law and governance. Parliament as an arm of government, ordinarily, supervises the functioning of government.

The Committee on Finance, Minerals, and Energy failed to thoroughly examine the deal in parliament.

The Parliament of Ghana, as a house, equally failed the people of Ghana, by allowing the deal to move to the stage of execution of the deal, without noticing those critical corruption issues.

Parliament as a key agency in the fight against corruption is too relaxed in doing its work. The Parliament of Ghana is required by law to scrutinize all business transactions of every government before approving them. But the use of majority votes to approve or disapprove the deals of governments does not permit effective scrutiny of these deals.

It appears the majority deem it fit to always act faithfully to their party, by approving business transactions without a critical assessment of the deals. It can be inferred that corrupt government transactions can pass through the system without the possible detection of corruption in the legislative house.

The majority does not owe their party the duty of approving transactions even if there are challenges with such transactions. The house need to act as representatives of the masses in the various constituencies, and not the party that got them the power. The two sides of the house must protect the interest of the populace. The house can always take a clue from the advisories of Civil Society Organisations.

The majority leader noted that Members of Parliament are not experts in all fields, hence are susceptible to making such fundamental errors as there are no available consultants to advise them on technical issues (emphasis mine). But there are committees on Finance, Mines and Energy as well as government business.

It is possible people serving on those committees do not have vast expertise in their area of focus in the legislative house, they can rely on the expertise of some Civil Society Organisations.

Civil Society Organisations in the country express opinions on issues that serve as early warning signs to the government of the day. Instead of hiring external consultants, Parliament can rely on them (CSOs) for advice in assessing the threats and opportunities of government transactions.

The failure of Parliament to critically carry out independent corruption risk assessments of government deals presently indicates the overall importance in training MPs to have specialised knowledge on the committees they serve.

The committee on finance has failed the people of Ghana by allowing the transaction to move to its current stage. At what stage does the Parliament of Ghana detect corruption in government business? There could be a failure in the legal system, which is first experienced in the legislative house.

The governance of a state concerns the executive making decisions about the positive direction of the country, by acting in the best interest of the citizens. Governance is about seeking the welfare of the populace. The Agyapa Royalties deal has exposed some loopholes in the governance structure or system of the state.

Civil Society Organisations act on behalf of the citizens by assessing the optimality of government decisions and deals. Governments are supposed to embrace the ideas of the CSOs in their decision-making processes. Governance is about seeking the welfare of the people, for them and by them. The governance of a state should be carried out together with the citizens. However, the citizens do not have the luxury of education and expertise to mount pressure on governments. Civil Society Organisations are the mouth-piece of the citizens who will not be able to detect corruption infused in government deals.

Until the corruption risk assessment of the Agyapa deal, some government officials defended the decision of the government as if the CSOs delight in only exposing the rot in such deals. They are acting to seek the interest of the citizens and not only exposing the rots of governments. Governments should make it a duty imposed on them, to sometimes incorporate the ideas and policy alternatives of the CSOs in their decisions.

In fact, the upshots of the current deal demand that every other deal must be scrutinized appropriately by the Parliament of Ghana and subsequently by the Special Prosecutor to possibly identify the level of risk of corruption associated with such deals. The CSOs need to continue to critically evaluate every deal of the government objectively as their actions represent the interest of the citizens.

The controversies surrounding the Agyapa Royalties deal are the direct consequences of the failure of the law or governance or both. The consideration of the work of the CSOs by the government could address some fundamental challenges in its deals.

IMF a stop-gap measure, not permanent solution to revive Gha...
59 minutes ago