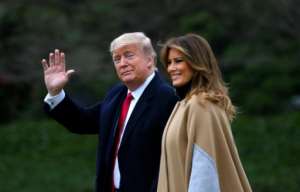 The world is better off without people like Donald Trump at the helm of affairs. Joe Biden is no angel but he is better than Donald Trump. He will surely be honourable in his handling of the affairs of the nation and the world at large.

Trump was a terrible mistake, which should never have happened in the first place. Someone who sees women as business products, abuses them, and openly brags about it; a glorified racist, an out of control liar, openly vindictive, and a very divisive President with no scruples. He opens his mouth, and you want to block your ears with whatever you can find.

Trump's Presidency was hell! He brought chaos to his own people. He polarized further the already super divided country. He gave life to racism and fueled it with his unguarded remarks. White supremacy took on a whole new dimension. White terror gangs received blank cheques to unleash mayhem on the black community. Blacks became targets of hate and harm.

According to the 'Small Arms Analytics', gun sales under the Presidency of Trump surged to an all time record, reaching 17 million in a single year. As every American took his safety into his own hands. No one, including his supporters, felt safe under the system Trump created. And no one believed in the system to provide him the needed protection. People took charge of their own safety and bought all manner of guns.

The ultimate beneficiaries in this chaos were the friends of the president - the big gun manufacturing and sales corporations.

Donald Trump waged war against Islam and Muslims; blacks, Mexicans, and any group of people he disliked. The Black community, as I stated, like rats in the market, were hounded and killed in broad daylight with careless abandon.

And when they peacefully protest, they are again chased onto the streets and killed. To the extent that when the black community demonstrated in Kenosha after the police shooting of Jacob Blake, Kyle Rittenhouse, an Illinois teenager wielding an AR-15 (military style) rifle fired into the protesters in the full glare of the police, killing two and wounding a third.

This was after the gruesome killing of George Floyd, another unarmed Blackman by the police, which sparked a wave of protests across the globe. Instead of words of hope and healing, as characteristic of him, Trump called the protesters anarchist, and that “when the looting starts, the shooting starts”, repeating what Walter E. Headley, the police chief of Miami, Florida, said in the heat of the Civil Rights campaign in 1967.

His hatred and condescending attitude towards the black community, caused him to even call Africa a “shithole”.

With his thoughtless and chaotically implemented policy of "America First", he made the world unsafe for everyone. While the entire world tried to build bridges, he was busily building walls. Deporting mothers and criminally caging their babies.

Trump’s disgraceful war of words with North Korea’s Kim Jon-Un, was another low for any leader anywhere in the world. He dragged the standard of leadership in the mad.

Trump isolated his own country from the rest of the world; cutting ties with international organizations, and tearing up treaties and agreements against international laws. He unilaterally canceled the Iran deal, recognised Jerusalem as the undivided capital of Israel, against the internationally agreed two-state solution, making the middle east unsafe for all.

Like an Arabian king, he was riding on the horse of economic growth and stock market surge. Then came the Coronavirus, like a house of cards, his economic and stock market empire came crushing before his eyes. Over 200,000 American lives were needlessly lost to the virus, all thanks to his weird and careless handling of the pandemic.

Before he knew the devastating impact of his carelessness, it was November 4th. He went to sleep as a President and woke as an outgoing President. His tantrums could not save him.