Should Ken Ofori-Atta Resign or be Sacked over Agyapa Deal? 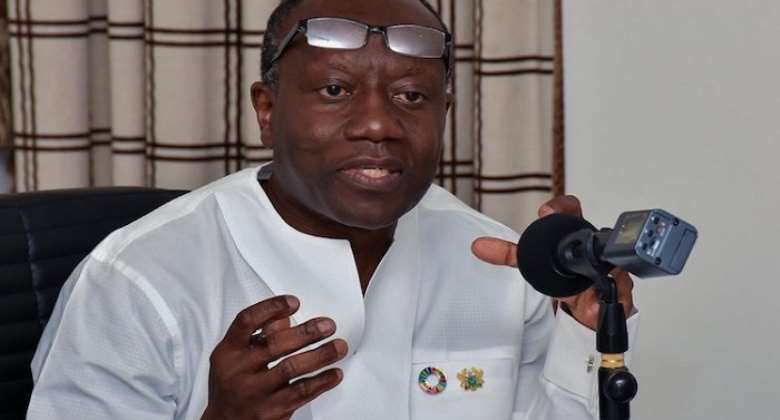 After reading through the 64-page report of the Special Prosecutor on the corruption and anti-corruption assessment of the Agyapa Royalties Agreements last night, I was amazed to find out today that, the Minister for Finance, Mr Ken Ofori-Atta has not resigned his position. Instead, he has been directed by the president to resend the Agyapa Royalties Agreements to parliament for (re)consideration. My amazement is from a number of reasons.

On the whole, the assessment report is very damning to the finance minister, one of his deputies and the finance ministry. It’s an indictment on the modus operandi of the minister and his ministry on this matter, which almost boarders on deliberate deception, criminality, illegality abuse of executive powers and unconstitutional acts. These are strong words to be used to describe the actions and omissions of one of the most senior cabinet members of the government. In any democratic society where the rule of law is supreme, such a minister would have resigned or be sacked.

Again, there was clear case of conflict of interest on the part of the finance minister in the selection of the local partners. Not only was the bank he owns considerable interest in was selected but also the condition for selection was inserted after approval was given by the Public Procurement Authority (PPA) for the restricted tender. I am not suggesting that because the finance minister has shares in Databank or a former employee was also head of procurement processes at his ministry, it was wrong for the bank to be selected or the bank could not participate as the local partner. In fact, it was the right thing to do by the inclusion of a local partners. However, from the report, there was no evidence of any of the two declaring their conflict of interest and therefore recusing themselves from the decision to select Databank as the local partner and in the words of the Special Prosecutor, the requirements of a local partner after the PPA had granted the restricted tender was a “decoy”.

Why is this important? Just last week, the CHRAJ found the former Chief Executive Officer (CEO) of the PPA guilty of conflict of interest and other criminal acts, leading to a recommendation for his dismissal, which the president acted on without delay. For me, the crimes of the dismissed PPA CEO pales into insignificant relative to those of the finance minister because the minister stands accused by the Special Prosecutor of not only illegally and unconstitutionally giving away the sovereignty of Ghana to control her gold mineral royalties to a company based in a tax haven but also in perpetuity, a situation that could potentially cause mineral related conflict in Ghana in the near future. In other words, the finance minister by his actions and omissions has mortgaged the future of Ghana to a foreign company. What crime is heavier than this?

If the president sacked the PPA COE for a lesser crime, why has he not done the same to the finance minister? Is it because the Special Prosecutor did not recommend sanctions against those involved in such illegalities or simply, blood is thicker than water? The fact is, the credibility of the finance minister has been damaged beyond repair and if he has any modicum of conscience, he should resign and save the president from the burden of having to sack his cousin from his cabinet. For those who may disagree with me, I quote just two examples of the numerous flaws (often deliberate) identified by the Special Prosecutor’s assessment report to buttress my case.

Page 42 states among others as follows, “Clause 2.2 which deals with the terms of the two (2) Agreements makes the agreements (and any other assignments and Allocation of Gold Minerals Royalties made under them) determinable on the date on which the last of the Allocated Mining Lease has expired or been terminated without any further extension or renewal (such period, the “Term”). This is an agreement surrendering the sovereignty of Ghana over gold mineral resources in perpetuity. This Clause is patently inconsistent with the trust powers entrusted to the President on behalf of the Republic under Articles 257(6), 258, 267, 268 and 269 of the unentrenched provisions of the 1992 Constitution. It also contravenes the sovereignty of the people of Ghana under Article 1 in and for whose welfare the powers of the government are to be exercised as laid down in the 1992 Constitution”.

Page 45 also states the following, “The recitals to the Relationship Agreement between the Republic of Ghana and the Minerals Investment Fund, and Agyapa Royalties Limited state the relationship between the parties when Agyapa Royalties Limited applies for its ordinary share capital to be admitted to the standard listing segment of the Official List maintained by the Financial Conduct Authority of the United Kingdom (the “FCA”) and to trade on the London Stock Exchange, after which the Minerals Income Investment Fund of the Republic of Ghana expected to be beneficiary holder of approximately fifty one percent (51%) of the Company’s share capital, and the agreement by the parties that regulate the relationship between them in order to ensure that the Company will be capable of carrying on with its business independently of the Fund and the Republic of Ghana, This recital clearly indicates an intention by the parties to abdicate the sovereignty of the people of Ghana over the supervision of the nation’s earnings from the Republic’s mineral resources under the 1992 Constitution”.

The two above are troubling to read and should not be ignored by the president, parliament and the people of Ghana. This is because the same concerns were raised by the Attorney General and Minister for Justice in her 25-pade legal advice to the finance minister dated 22 July 2020. For example, Section 5 of her general comments states as follows: “The Agreements run in perpetuity and therefore have no fixed term. They are expected to run until the expiration of the last Mining Lease in Ghana. The Agreements also appear to be cast in stone with no option to evaluate their effectiveness and to or satisfactory performance so as to renew or terminate same should the need arise. This makes the Agreement unconscionable”.

Despite the above warning and the dangers of the agreement, the finance minister ignored the concerns and went ahead to get the agreement approved by parliament unamended. But for the meticulous work of the Special Prosecutor, Ghana would have surrendered and abdicated her sovereign rights over gold mineral royalties in perpetuity to a safe haven company that could disappear into thin air in the near future, resulting in Ghana’s gold mineral royalties ending up in the hands of untraceable individuals.

It's also clear that the finance ministry deliberately set out to deny and frustrate the Special Prosecute from carrying out its legitimate mandate of subjecting the deal to corruption and anti-corruption assessment. This was shrouded in the delays and excuses such as refusing to provide documents in whole as well as providing contradictory responses, some of which amounted to deceiving the Special Prosecutor. This was led by no mean person than the Deputy Finance Minister, Mr Charles Adu Boahene. A typical example was the appointment of African Legal Associates as one of the two local Transaction Advisors.

It is my view, that the flaws in the Agyapa Agreements as initially identified by the Attorney General and Minister for Justice and subsequently confirmed by the Special Prosecutor in his corruption and anti-corruption assessment were such that the agreements as they stand now are irredeemable. The government should go back to the drawing board in a true bipartisan work to get a new agreement before it is listed on the London Stock Exchange after the general election on December 7, 2020. Finally, the company, Agyapa Royalties Limited should not be registered in a safe haven.

The idea behind the Agyapa Agreements (raising funds for capital projects without increasing the sovereign debt of Ghana) was a good one initiated under previous governments but its implementation has been catastrophic and damaging to Ghana. These, perhaps were due to the fact that, both the Executive and Legislature depended too much on one individual, the Finance Minister. This might have given him the impression that he had power to do whatever he wanted, including ignoring the legal advice of the Attorney General and Minister for Justice. In doing so, he has not only let himself down but his ministry, the president and Ghana. He is an accomplished investment banker, so he should resign honourably, go back to manage his Databank to restore his credibility. Sadly, he has become a victim of his ambition, the rush to list on the London Stock Exchange and to do the best for the president and Ghana but ignoring clear advice of illegality and unconstitutional acts by the Attorney General was not only folly but has also caused his own downfall. Whether he resigns, sacked or not, his reputation would never be the same.

IMF a stop-gap measure, not permanent solution to revive Gha...
55 minutes ago