In US Elections, you become President by Winning States, not by Winning Individual votes. 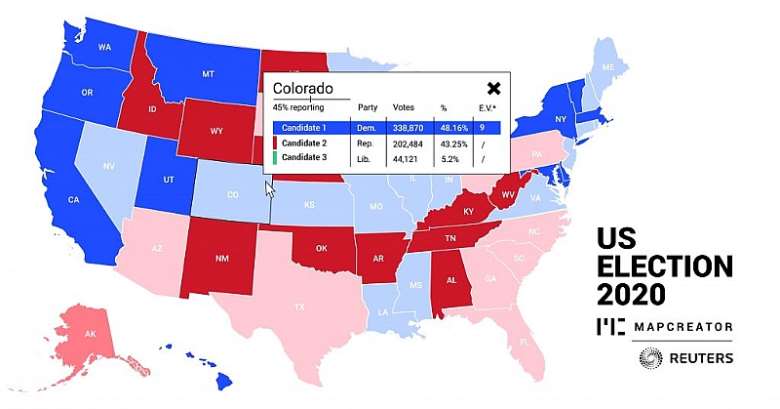 Campaigns in the United States of America (US) over the past few days were much centred on swing states (or battleground states) because that is where the victory into the White House is determined. In the battleground states, either of the candidates (Mr Trump or Biden) has equal chance to effect a win in favour of their political representation; say Republicans as represented by President Trump and Democrats for Mr Biden. In the last past days, we saw President Trump and Mr Biden actively crisscrossing the battleground states to make their cases known, heard and visible to the American voters.

Again, we have seen both candidates focusing on states like Florida, Texas, Georgia, Arizona, California, Michigan, Pennsylvania, Wisconsin, Ohio, North Carolina etc. Those states got much attention because some recorded a close contest over the last few presidential elections and so, focus must be made on those states so as not to have a slip. Others could argue that Texas, Georgia and Arizona have been won by the Republicans in recent elections and thus a safer ground for the Trumps. Yes! Very true! However, such states were won narrowly and with a minor slip, it could turn to the Democrats. The Democrats have made improvements in those states in times past and they are actively working to make Texas Blue. Don’t also forget that the Republicans have long fought a strong game in the more affluent suburbs of major cities, giving them, probably an edge in swing states like Pennsylvania where the Democratic vote is largely concentrated in Pittsburgh and Philadelphia. This is also an interesting electoral point to look at in today’s US elections.

In US elections, you win electoral votes by winning states. States with a lot of people have more electoral votes. California has 55, Texas has 38, Florida has 29, whereas those with small populations have fewer (Hawaii has 4, Alaska as 3; no state has fewer than 3). The overwhelming majority of states (48 out of 50) have a winner takes all system of assigning electoral votes. If you win California by 50.01% to 49.99% you get all her 55 votes and your opponent gets zero. Nebraska (5) and Maine (4) are the only two states who are not winner takes all.

You might be worried, probably thinking that some states are neglected or not giving the campaign attention they so deserve. The political demographics carve some states as Safe States because such states are highly predictable as to which political leaning they favoured in the past electoral decades or so. To give you a perspective in the case of Ghana, is just like the New Patriotic Party (NPP) not really concentrating their energies on the Volta Region as it is known to be a Safe Region for the National Democratic Congress (NDC). And same of the NDC in the Ashanti Region. These political parties get higher votes without, probably significant efforts in those regions.

Also, some states receive higher priority over others in terms of presidential campaigns as a result of the winner-takes-all syndrome. This method forces candidates to campaign in competitive states and states which have higher electors. With the winner-takes-all method, a candidate who receives the most votes (even ONE vote ahead) from a state’s popular votes gets all of the state’s delegate votes. Electors hardly vote against the wishes of popular votes. The walk into the White House rest indirectly on the shoulders of popular voters; and directly by electors. Note that an elector is a member of the electoral college. These electors, appointed by the states, are pledged to support the presidential candidate the voters have supported. The number of electors of each state depends on the population of same and thus, each state has a number of electors based on the number of congressional districts in that state. In sum, the US has 538 total electoral votes with a majority of 270 or above for a candidate to be declared winner of the presidential seat. Just to give you a clue, Texas has 38 electors, Pennsylvania 20, North Carolina 15, Ohio 18, Florida 29, Georgia 16, California 55 etc. These alone, should tell you why some states would receive higher campaign attention to others. It is again important to mention that aside from Maine and Nebraska, if a candidate gets the most votes within a state they receive that state’s full quota of electoral college votes.

One confusing drama you might not understand is that you don’t necessarily win US elections into the White House by getting on overall majority. If nothing at and if all things being equal, Mrs. Clinton would have been the president of US by now as she got nearly three million (3m) votes ahead of Trump in the 2016 elections. However, the electors vote. More so, former Democrat Albert Gore won the most votes, a half million more than his Republican opponent George W. Bush but lost the presidency in the electoral college of 271-267 in the 2000 elections.

Decades past, especially during the periods of Franklin D. Roosevelt’ and those before him and slightly after him, Democrats dominated because they were building successive victories on economic and welfare issues. The major controversies between the parties centered on the role of the national government, particularly its distribution of taxes and benefits--such as jobs, Social Security, and health care--among different groups. Today, the paradigm has shifted to issues of race, morality, and lifestyle developed alongside the previous divisions on economic and welfare policy. Both Democrats and Republicans differ on issues as civil rights and affirmative action, abortion, women's role in society, crime etc. Could racism and crime be a deciding factor in today’s US elections?