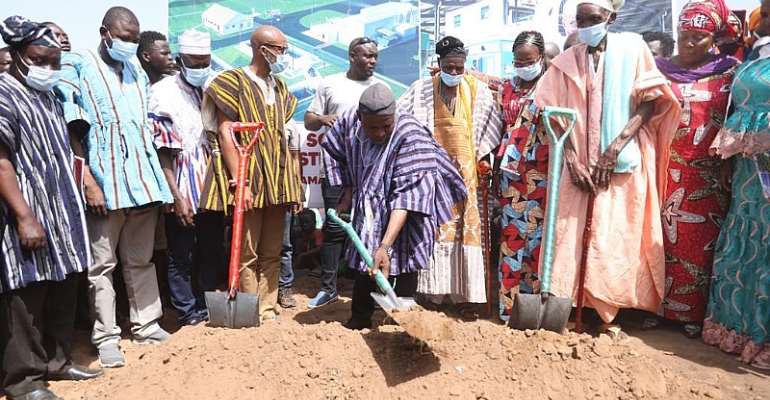 The Regional Minister of Northern Region Hon. Alhaji Salifu Saeed on behalf of the President of the Republic of Ghana Nana Akufo-Addo has cut sod for the construction of the integrated waste treatment plant at Gbalahi Landfill site at Tamale the capital of the Northern Region.

The construction of the plant is in collaboration with the government of Ghana and the Jospong Group of Companies (JGC) with its private partners.

Speaking during the sod-cutting ceremony in the Gbalahi Community, the Hon. Alhaji Salifu Saeed said the construction of the Gbalahi plant was part of the government's policy aimed at tackling sanitation problems with the private sector.

According to him, the two facilities when completed will boost the region's Agribusiness and the country's economy as a whole.

He commended the Jospong Group for taking the initiative of venturing into the sanitation sector to help the government deal with sanitation problems in the country.

"I appeal to you to give the President another term to continue with his good works."

Speaking on behalf of the Chief Executive Officer of Jospong Groups of Companies, Madam Florence Larbi, Managing Director of Zoomlion Ghana Ltd said the facilities are to Create jobs for the youth and improve the general wellbeing of residents at large.

"The facilities when completed will create 75 direct and over 200 indirect; Boosting of cleanliness and tourism potential in the Central Business Districts; General improvement in Sanitation in the capital; Improved general wellbeing of the people of Ghana because of the elimination of dangerous gases from untreated waste; Overall achievement of the President’s vision of making Ghana the cleanest country in Africa and Contribution to the attainment of the United Nations Sustainable Development Goals on Sanitation and Climate Action", she said.

She then lauded his Excellency, Nana Akufo Addo, for his unflinching support to the private sector and particularly those in the environment and sanitation sector especially Zoomlion Ghana Limited.

She also commended Hon. Cecilia Abena Dapaah, Minister of Sanitation and Water Resources for being a strong backbone of the President’s vision of making Ghana clean.

The Metropolitan Chief Executive of Tamale Hon. Musah Superior, in his welcome address, commended President Nana Addo Dankwa Akufo-Addo and the Jospong Group for citing the Treatment Facility in the Northern regional capital.

"This occasion is so special to myself and the Sagnarigu Municipal assembly. Today's meeting is important because we will have solutions to our Sanitation problem. I'm delighted on behalf of the chiefs, people of Tamale that this project is been done nationwide. Let me thank President Akufo-Addo for his commitment to the people of the northern region.

He also commended and assured to support the Jospong Group of Companies and its partners to ensure the project is completed on time.

The first facility is a 200 tons waste treatment facility equipped with 21st-century technologies in sanitation management and it aims to provide a sustainable solution to recover and recycle over 60% of the organic fraction of the waste into compost to boost the agricultural sector and support the Planting for Food and Jobs Agenda. Other recyclable materials will also be separated and processed for reuse.

This Waste treatment Plant presents the most suitable alternative to landfill waste disposal, deploying the latest technologies in sanitation management.

Presently, the region generates 183,000 tons of waste annually, most of which goes into landfills making it hazardous to the citizenry. The facility has the potential of curbing this.

The 2nd facility, the Tamale Waste Water Treatment Plant will process about 1000 cm3 of liquid waste per day. Although the liquid waste generated in Tamale currently is between 400 to 500 cm3 (cubic meters ) per day, we aim to build to a capacity that will serve Tamale and the surrounding MMDAS like Savelugu Municipal, Nantong District, Tolon District, Kumbumgu District, Mion District and beyond.

These projects are estimated to cost 20 million Euros and will be completed within 12 months.