Asia: The Game-Changer For The Superpowers

By M A Hossain 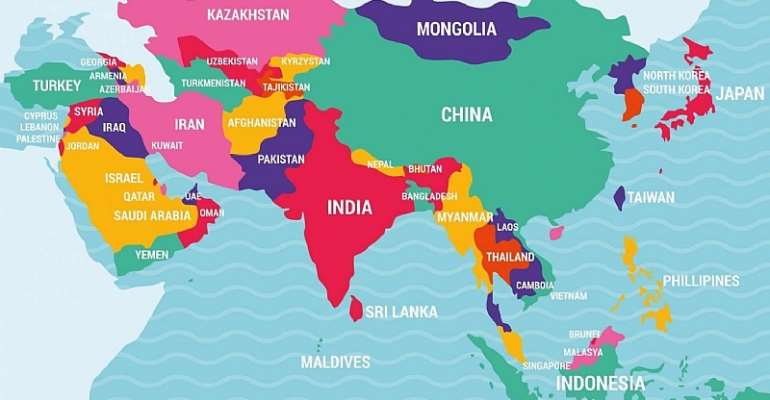 The United States has been trying relentlessly for building an international coalition against China. The US has adopted 'contain policy' and already the indicators of a gathering storm are getting alarmingly visible now. The anti-China, Indo-Pacific military alliance is known as"Quad" and the US's extraordinary momentum on Indo-Pacific Strategy(IPS) have finally revealed the maneuvering theater or launching pad for another game-changing Cold War.

If we study the map of Asia, we find an endeavor of checkmate in the real chessboard between two superpowers- the US and China. Japan, South Korea — North Korea, Taiwan — Hong Kong, India — Pakistan, Sri Lanka, Myanmar, Saudi led the US allies — Afghanistan, Iran all these countering pawns are guarding and checking each other to keep the regional situation stable. There are many entry points to mainland China but from the military point of view, the South China Sea will be the main theater is to get entrance for the USA. Russia, Central Asian states or ASEAN states will not allow the USA to get the military advantages in any hot conflict between the US and China. After the recent China India spat, that only leaves South Asia the most likely theater for the US to contain China effectively. The US quickly turns up for IPS and shows its great interest in inviting the initiatives for geospatial cooperation with South Asia. If India at extreme point gets involve in the US-led assault on China, in turn, entire South Asia(especially Nepal, Bhutan Bangladesh and Pakistan) will be into a deadly battlefield of superpower hostility. No doubt, except Bangladesh entire South Asia, is polarized into two superpowers. Bangladesh will be in immense pressure from her close ally India as well as the US. Bangladesh may be dragged with lucrative offers or threatened to confiscate of USD 38 billion reserves like Iran, Venezuela, Cuba to join the US-led allies. But China has already created a countermeasure with the Rohingya crisis, and China-built submarine network. To bar from leaning to the U.S. alliance, China has come forward with prodigious economic assistances for neutral states in this region. There is also the port facility from Sri Lanka, Pakistan and Myanmar for China.

Other Asian nations are also spiralling from one peak to another on political turmoil. Belarus people are on the street against the malpractices of the President. Hong Kong and Thailand continue spat on its internal political crises. Iran, Iraq, Syria and Yemen remain to engage in intra conflict. Gulf nations were polarized by Trump's inane attempt to restore peace. Lebanon has once again faced a deep political crisis after the Beirut blast. Myanmar continues persecution on Rakhine state in the name of insurgents clearing operation. ASEAN and the EU are not happy on Trump's administration, and that already has surfaced unprecedentedly during various world leaders' forum. China, Nepal, Bhutan have border demarcation problem with India. Afghanistan, Pakistan, Maldives and Malaysia are facing internal political crises. This de-escalation of peace is prevailing for showing supremacy as sabre-rattling tactics by the superpowers.

So, the US-China war will be nothing but to shrink the Chinese fastest-growing economy or contain Chinese influence or accessibility to Eurasia. Socioeconomic strength is the main indicator to lead the world from the forefront. President Trump has walked out from various world organizations to avoid donations of a huge sum as America is facing ever worst economic recession but China is filling that vacuums. And this is the norms to be the number one superpower. Now America's supremacy is at stake, so, she will leave no stone unturned to ruin China's ambition to become the number one superpower.

M A Hossain, a political and defence analyst writes on diversified topics in Bangladeshi and foreign newspapers

You must be encouraged and supported for not being a spectat...
11 minutes ago