Going home to bury my mother before the Covid-19 restrictions 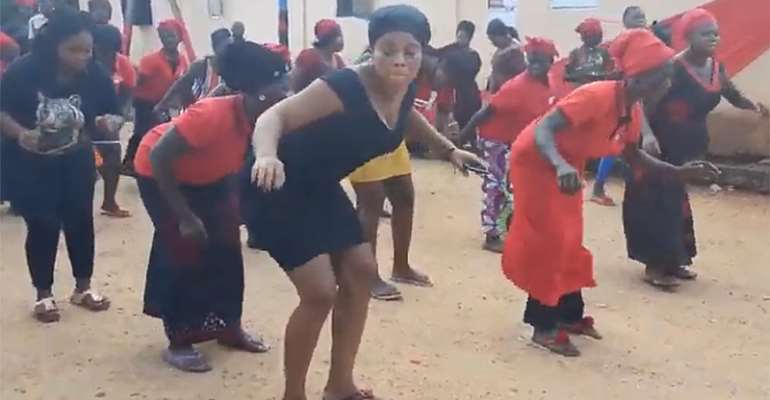 Dancing borborbor at a pre-Covid funeral

Was I lucky? I returned from Ghana at the end of February. I went to bury my mother. I came back just in time before the borders were slammed shut following the Covid scare. So I was able to bury my mother in the manner of pre-Covid Ghanaian burials.

I did not want to do the Ghanaian thing. I’ve lived too long in Europe to be enamoured by Ghanaian funerals. But my siblings at home were determined to perform a fully-fledged Ghanaian funeral with lots of food (they bought a cow), brass band, borborbor, dancing pall bearers and what have you. I was determined not to have any of these.

Fortunately, because we are Ewe, there was no eighth day ceremony. But I hear the Ewes are copying this typically Akan custom these days. Some of them, especially those living in Akan areas, say they attend these ceremonies where they make contributions. They have to celebrate such so they can have people coming to contribute to them too.

The old lady’s funeral went well. Even though I was paying for much of it, I realised it would be unfair of me to control the manner in which the others wanted to express their grief. But I escaped the commercial pall bearers. I said a big NO to that. My mother took care of many of her nephews and nieces and others. There are many young men in the family. If these men cannot carry the woman who took care of them on her last journey in this world, and leave that job to commercial pall bearers who never set eyes on her before, then what good are they? It was a symbolic thing for me. I am no spring chicken myself but I joined the group that carried the coffin in and out of the chapel.

I insisted on a brochure of no more than 12 pages. My people will have none of that. It ended up with 18 pages. Yet some complained that their pictures did not make it in to the brochure. Even some of the chiefs complained their names were not on the poster announcing the death even though we had managed to pack in more than 30 of such names! I hear some chiefs and elders spend hours combing through the funeral posters and brochures looking for their names. Trouble for you if they are not listed! I also got my wish that the European city in which I live should not be attached to my name.

Yes, I know it is a cultural thing and this is our culture. If you don’t do it big “people will talk about you…” I also know funerals are more for the living than for the dead who see not and hear not. But it was still our culture when we were doing simpler funerals. What has changed? When my father died 25 years ago, the burial brochure was just a folded photocopied A4 sheet with a single picture on it and a few names including the old man’s many children. But the new media is dictating new contingencies. The digital brochures are widely shared on social media. The brightly coloured print ones on glossy paper become collectors’ items shared only to a select few.

I was also expected to bring some items from “abroad” to give the funeral a foreign flavour. I refused that one too. There is nothing you can’t get in Ghana these days – especially things with which you can celebrate funerals!

Oh, there was one wish too I had. I didn’t see the need for a tribute to my mother from her children. I felt it was silly. The filial bond between mother and child was not one that could be expressed in written words. It is sacred. How could I stand before the public and “boast” of how much my mother meant to me when she was alive? Doesn’t everybody’s mother mean something to him?

I have read many tributes to parents and they all contain similar things with the same mawkish flattery and sentimental tosh. The same Biblical passages are invoked for one purpose or the other and, often, for no purpose at all. I wasn’t going to add to this compilation of clichés. So I didn’t write a tribute to my own mother. But I wrote a nice story of her life that started between the two World Wars and came to an end last year so those who didn’t know her would know who she was and what her life was like. The Ewe translation was read out at the service. Some people said this was better than a tribute. And my heart glowed! Oh, when she was being lowered into the grave, I wept like the little boy that she once clutched to her bosom and said comforting words to. What written tribute can surpass that?

But there were many things I could not control – the souvenirs (key chains, t-shirts, umbrellas, mugs, handkerchiefs, tin cutters…), the buffet for the fine folk, mass cooking and “take away” for the others, the white cloth that everyone must buy and wear on the day, the house that had to be renovated and made nicer than it was when she lived in it, and the music played relentlessly at high volume throughout the night of her lying in state! We used an ordinary coffin, not a casket that depicted her occupation in life. Thank goodness!

When the lockdown came to parts of Ghana, bodies were piling up in the morgues. Many families were waiting for the ban on movements to be lifted so they could splash out on funerals. Only a few people took the step to bury their departed with the Covid restrictions in place. These burials looked like the European ones – business-like with only few in attendance. These families may have spent far less on these burials than they would have done during the pre-Covid days.

One would think others will follow this “good” example and see that elaborate and costly funerals are not necessary. But no!

We are a people who love celebrations: engagements, weddings, out-doorings, birthdays, (some people celebrate in grand style even odd ones like 42 or 63), getting a degree, surviving accidents and surgical operations, you name it. And then the ubiquitous funeral celebrations!

The state too has joined in with elaborate national funerals even for citizens whose contribution to the national effort is no more than their having mothered some head of state! We have made the celebration of grief a national pastime. The top politicians, with an eye on the next elections, dutifully attend all these celebrations. And covid-19 is not going to spoil the party for us!

We make so much fuss about the dead yet we forget them once we bury them. A big funeral is followed by interment in cemeteries that are unkempt, over-crowded in the cities, and dirty. There are no rules about gravestones which face whichever way the bereaved want and can be of any size. This disorderly jumble is reflected in other aspects of our social lives too.

Our obsession with funerals has been carried into the Ghanaian communities abroad. Elaborate eighth day celebrations are now common in Europe and North America. Some of those who organise these events don’t even travel home to bury the parents they had not seen for several years!

We are a Christian nation. Our funeral brochures always contain passages from the Bible. II Timothy 4:7 about fighting the good fight has been popular. Something from the beginning of Ecclesiastes is also often used. But one verse you will never see in these brochures is the admonition by Jesus to let the dead bury the dead (Mathew 8:2).

Man killed by bosom friend for demanding GH¢4 debt at Seikwa...
9 minutes ago