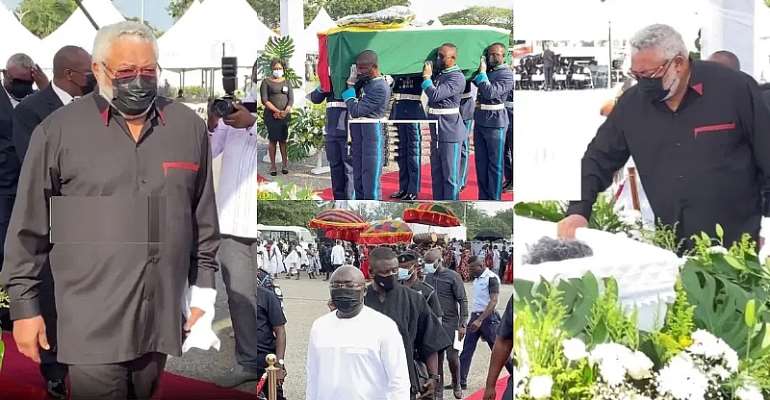 JJ Rawlings placing a rose flower on the mum's remains

Ex-President Flt. Lt. Jerry John Rawlings became emotional and shed tears at the weekend as he paid his last respect to his mother, Victoria Agbotui, at the burial service held at the forecourt of the State House, Accra.

Holding the casket which contained the remains of his late mother, Mr. Rawlings removed his spectacles and wiped some tears—an indication, according to analysts, was a sincere feeling of loss exhibited by the 'strongman'.

Madam Agbotui died on September 24, 2020 after celebrating her 101st birthday. Her final journey home triggered outpouring of grief from all over the country during the interdenominational service filing past of the body.

Ex-President Rawlings might have taken a cue from some of his family members and sympathisers who were dressed in white and barely able to hold back the tears.

The scenes were reminiscent of the mourning that followed the burial service of the late Most Rev. Dr. Samuel Asante-Antwi, who was also the Chairperson of the Board of Trustees of the National Cathedral, at the same venue on Friday.

The funeral rite was attended by President Akufo-Addo and his vice, Dr. Mahamudu Bawumia, as well as other government functionaries.

The National Chairman of the National Democratic Congress (NDC), Samuel Ofosu Ampofo, led the party's delegation to the funeral rite to mourn with the party's founder.

Earlier, there were eyebrows raised when the flagbearer of the NDC, John Dramani Mahama, was conspicuously missing at the solemn event.

His absence at the forecourt of the State House even prompted speculations he may 'retaliating' after the NDC founder 'missed' the party's manifesto launch in early September, but it later emerged that Mr. Mahama rather chose to attend the burial service for the late Madam Victoria Agbotui at Ketasco Park, Dzelukope, Keta in the Volta Region.

He later posted on social media a picture that captured him greeting Mr. Rawlings and former First Lady Nana Konadu Agyemang Rawlings at the funeral grounds.

Akufo-Addo is confused over MMDCEs appointment – Ho Central ...
58 minutes ago