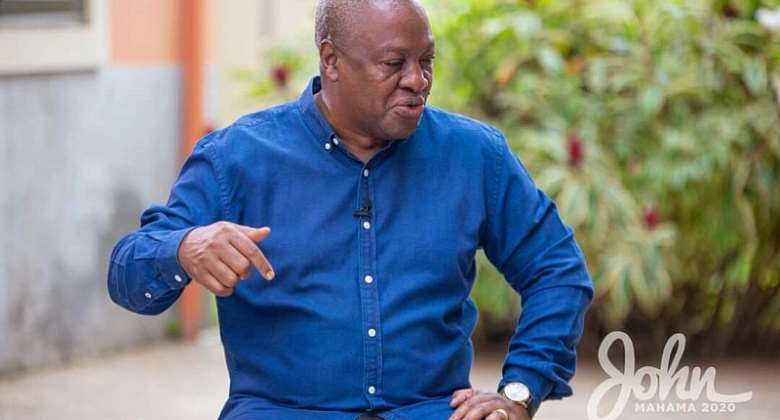 Former President John Mahama has warned that Ghana should not think that an EndSARS-like rebellion cannot happen in the country as is happening in Nigeria.

Protests by Nigerian youth calling for an end to police brutality meted out to citizens by the country’s Special Anti-Robbery Squad (SARS) have degenerated into killing sprees by the police and military in the past two weeks.

This has sparked outrage in the international community with celebrities and high-profile personalities calling out President Muhammadu Buhari and his government.

Speaking on the matter in an interview with Woezor TV on Friday, 23 October 2020, the presidential candidate of Ghana’s biggest opposition party, National Democratic Congress (NDC) explained that: “Nigeria has been a tinder box of ethnic tensions”.

“Nigeria is several nations in one but it has a big population of young people who are very creative, very purpose-driven, very high-achieving and they are fully motivated to make it in life and, so, the fact that there is this growing youth who have a different orientation from the older generation and who are looking for opportunities and they cannot find those opportunities, is what is reflecting in this current rebellion.

“he brutality of the Special Anti-Armed Robbery Squad is an issue that has existed.

“They younger generation is no longer prepared to take that. And, so, that became the focal point for rallying – #EndSARS but then, it’s now begun to encompass some wider issues including corruption, opportunities, unemployment, and all that kind of thing, so, it’s becoming like a movement”, Mr Mahama said.

Relating what is happening in Nigeria to Ghana, Mr Mahama warned: “We shouldn’t sit here in Ghana and think it cannot happen here in Ghana”.

According to him, “Our young people, too, are purpose-driven; they are our children, we know them, we know what their aspirations are; they think differently from us and the point is: for the older generation that doesn’t understand what the aspirations of these young people are, you think you just throw Free SHS [at them] and, so, that’s the end of it”.

“It’s not only about Free SHS, it’s also about what opportunities exit for them after they leave secondary school.

“Of course, in Ghana we don’t have a portion of the police service that is equivalent to SARS but we have our own national security issues, we have that SWAT force who come with masks and things and they have jackknives and all kinds of things all over them.

“Depending on how that plays out, it could end up in anything and, so, we should not take things for granted”, Mr Mahama said.