A Journey through History: Aŋlɔ, UK, Danes and the Germans 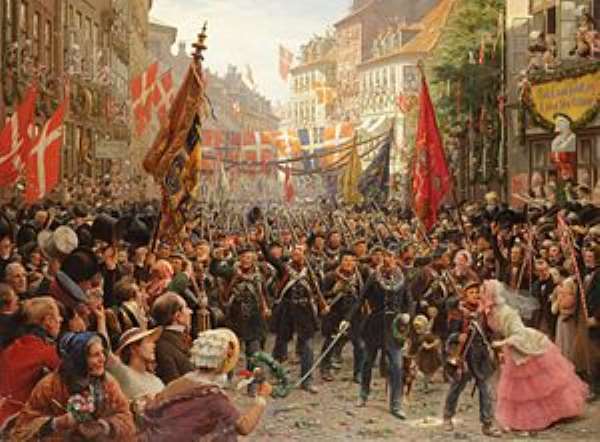 Before the country called Germany was formed it went through a lot faces. At a point it was made of over 36 separate German states, Austria was then a part of the larger German Confederation and together with Prussia were the most important German States.

In 1808 Johann Gottlieb Fichte published his addresses to the Germans arguing for German nationalism and unity. A series of events followed and in 1832 A rally was organized where participants demonstrated for liberalization and unification of the German States.

During this period, the man Otto Eduard Leopold, Prince of Bismarck known as Otto Von Bismarch would be born in 1815, and would be counted as one of the most important German leaders in the history of modern Germany.

In 1848 the first Schleswig war or three years war began, it was the first round of military conflict in the then southern Denmark and Northern Germany. The conflict was rooted in the Schleswig-Holstein uncertainty which was very similar to events of Transvolta Togoland. German rebels captured the government fortress at Rendsburg. This conflict was because in Schleswig-Holstein there was a significant number of Germans, yet the territory was under Denmark and so the Germans wanted to free themselves in order to be able to join the larger German nation when it eventually unites. Troops from Prussia and Sweden joined to fight but due to international pressure the war ended in a Danish victory when the rebels signed a London Protocol in 1852.

In the same year, 1848 federal election was held in 39 States of the German confederation to a national constituent assembly also the Frankfurt Parliament with a goal to Unite Germany.

Otto Von Bismarck was elected too. At this stage of Bismarck's life he was opposed to German unification, He was a Prussian politician so his fear and argument against unification was that, if the Unification of Germany took place, Prussia would lose its independence and he would also lose power to some extent. He therefore, accepted his election to the Frankfurt Parliament just so that he could be able to oppose the plans for German Unification better.

Take note of the dates in these events. Why would the Danes sell off their assets in Danish Goldcoast just within the period that the Germans wanted to Unite in 1850. And why was the beneficiary UK and why was UK interested in resolving the Schleswig-Holstein war in favour of Denmark.

Denmark's and Norway's population consisted significantly of Northern Germans, so the Danes were worried that when Germans eventually unite, the territories they shared with Northern Germans as colonies (where they run the trade and the Germans managed religion) was likely to go entirely into the hand of the Germans because aside their small fort located at Keta the German missionaries had already made contacts with the chiefs and people which eventually became the rule of colonial expansion.

The Danes knew that the Northern Germans alone were weak but joining with Prussia and the other German States would change the game and make them a power bloc.

Another thing that influenced the British to accept a fort in conflict land without an attempt of making the Aŋlɔs sign at the time was that aside Aŋlɔs being hostile. Otto Von Bismarck was not interested in a United Germany neither was he interested in claiming colonial territory and so the Northern Germans who run the Missionary alone did not have a chance against the UK. They did not have the capacity to form a government except to continue the church-school indoctrination.

Your independence will be respected – Akufo-Addo assures new...
10 minutes ago

He has the capacity, intellectual strength to succeed – Akuf...
15 minutes ago