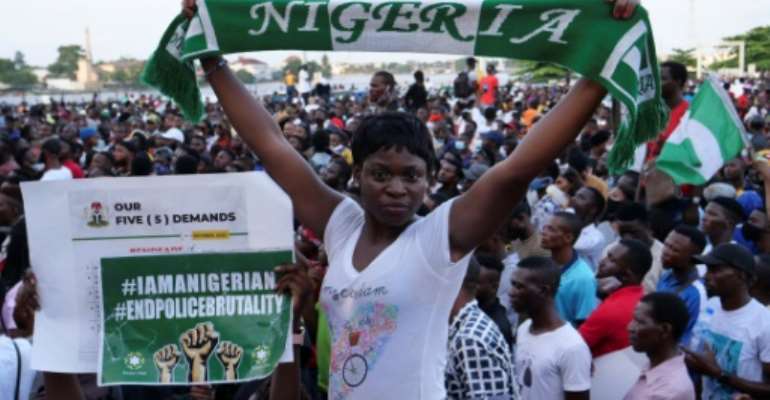 Protestors can be seen carrying Nigeria's green and white flag in what has become an ongoing festival of contestation. By Pierre FAVENNEC (AFP)

Dancing, chanting and determined: thousands of young Nigerians are jamming the streets of megacity Lagos to protest against police violence and vent at a society they feel sidelines them.

West Africa's economic hub and beating heart, normally bustling with traffic, is at a standstill as demonstrators have occupied major roads day after day since last week.

The gigantic Lekki Toll Gate, a key junction in and out of the city of 20 million people, is the main stage for the ongoing festival of contestation.

DJs take turns on a makeshift stage in front of a jubilant crowd, while others set up pool tables and hustlers sell soft drinks nearby.

Convertible Mercedes and beaten-up cars park side by side in the middle of the crowd, windows down and pumping music, as onlookers drink beers and raise clenched-fisted salutes.

Protesters have gathered at the Lekki Toll Gate, a key junction in and out of the city of 20 million people. By Pierre FAVENNEC (AFP)

The slogan, initially launched to denounce the unit after a video of a man being allegedly killed by police went viral last month, has become a rallying cry against injustice and for more freedom.

"We are tired, we are not free in this country."

Bowing under pressure and faced with a massive online campaign supported by celebrities like Cardi B, Kanye West or Twitter's CEO Jack Dorsey, the government dissolved SARS and announced a raft of police reforms.

It is Nigeria's entertainers and pop stars, icons whose influence stretches across social classes, rather than politicians who are supporting the movement. By Pierre FAVENNEC (AFP)

But it has not been enough to appease the anger and determination of the street.

The creation of a new SWAT team to replace SARS is among the newly announced measures that protesters oppose.

Quickly, the hashtag #EndSWAT was added to #EndSARS and hundreds more people continued to join the movement in a string of cities including in the capital Abuja.

"#EndSARS united us. Now our eyes are open and we are fighting. Our independence is starting now," Daniel says.

She insists the government address five main demands: the release of all arrested protesters, compensation for families of victims of police abuse, the setting up of an independent investigative body, psychological evaluation of all disbanded SARS officers and an increase of police salaries.

"They think we are joking. They look at us, sitting in their offices, and they think we are kids partying and that we will go home. I can tell you, we are not going anywhere, I am so proud of our generation," she says.

"The protests have snowballed into an outlet for latent anger and frustration," Leena Koni Hoffmann, associate fellow at Chatham House wrote.

"Nigeria has the largest number of young people in poverty in the world, as well as the most food insecure households in West Africa."

The creation of a new SWAT team to replace the Special Anti-Robbery Squad is among the newly announced measures that protesters oppose. By Pierre FAVENNEC (AFP)

This social uprising is first and foremost the result of a generational divide, where the youth does not identify with its ageing rulers.

President Muhammadu Buhari, 77 and a conservative Muslim, is at the helm of a country where half of its 200 million people are under the age of 30 and where the median age is 18.

It is Nigeria's pop stars, icons whose influence stretches across social classes, rather than politicians who are supporting the movement.

"We don't have a leader. But the youth, the masses wanted us, the celebrities, to speak out. Now I am out, and I'm staying here," Peter Okoye, a singer known as Mr P with 9 million Instagram followers, says.

Standing on his luxury 4x4, the performer's voice crackles as he shouts to the crowd.