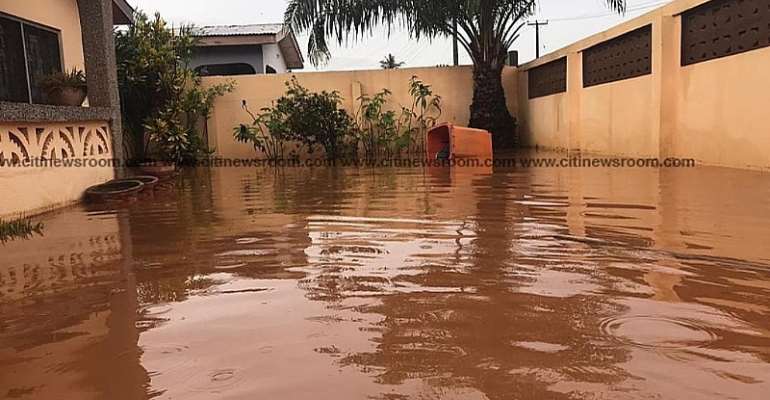 Flood in Accra dates back to the 1950s. A spokesman for the Meteorological Services said “the heaviest rain ever recorded in the city fell in June 1959, when a volume of 7.56 inches was registered. The rain nearly brought normal life in the city to a standstill, with offices and shops closed and schoolchildren taking a French leave”

On July 5, 1995, rains which started at midnight, caused flooding by morning in low areas of the Accra metropolis. The flood did not only affect commuters and vehicles but also the Achimota VRA substation, resulting in power cuts. On June 13, 1997, hours of an intermittent downpour for two continuous days in Accra caused floods.

The Graphic on June 28, 2001, reported that over 300,000 people were affected in an early morning downpour that submerged portions of the city, affecting many houses and structures within Madina, Achimota, Dzorwulu, Avenor, Santa Maria, and Adabraka Official Town. In May 5, 2010, Central Accra, Ofankor and Begoro were deeply submerged in water after two hours of stormy rains. In June 22, 2010, the nation’s worst flood disaster then occurred with a death toll of 35.

In February 24, 2011, a downpour wreaked extensive havoc on properties in most parts of Accra and some of its surrounding communities. In November 1, 2011, a downpour occurred in Accra that affected 43,087 people with 14 deaths recorded by NADMO.

In May 31, 2013, heavy rains caused flooding in some parts of Accra such as the Kwame Nkrumah Circle, Darkuman Kokompe, the Obetsebi Lamptey Circle, and portions of the Graphic Road, Santa Maria, and the Dansoman Roundabout.

The one with most media reportage, and attention, leading to the declaration of state mourning occurred on 3rd June 2015, when a heavy downpour in Accra claimed over 160 lives as a GOIL Fuel Station exploded at the Kwame Nkrumah Circle.

I cite all these sad events to highlight the neglect of duty our leaders have exhibited over the years. Political leaders continuously blame each other when these floods, which have become an annual ritual happen. We have politicized the National Disaster Management Organization.

We’ve recorded a history of heads of NADMO using state relief items for personal and political party campaigns. It’s a major cause of what’s happening in Accra and many parts of the country today. This politicization has led to unclear roles, lack of effective collaboration between state agencies charged with such mandate.

Relocating slum communities have always been difficult for our leaders because of the consequences of elections. It seems to me our leaders have their eyes firmly on the next elections and not the next generation. Our leaders have over the years shown they lack the testicular fortitude to take tough decisions that have a major consequence on our lives and that of posterity, tomorrow.

I thought the death of over 160 innocent lives on June 3, 2015, will cause our leaders to act but no, the situation keeps building. Government agencies have colluded and sold Ramseyer sites to private developers. MMDCEs have sat unconcerned as individuals and developers build on waterways. Those who act only do so to get a kickback.

I put it to our leaders that they have failed us all. We the citizens must also take a portion of the blame. Another contributing factor is poor sanitation. In my view as a student of climate science, sanitation is a collective responsibility between the state and the entire citizenry. Many of us have turned the drains in front of our houses as refuse dumps. We do so forgetting that these wastes will choke the gutters, block waterways, and lead to floods when it rain.

Lastly, I feel the under-resourcing of the Ghana Meteorological Agency forms part of the problem. The agency should be resourced and equipped to give timely and precise weather information to the citizens and state agencies. Poor early warning systems contribute to flood situations.

This perennial flood sums up in institutional coordination deficits, technocratic deficiencies, and neoliberal thinking. In most advanced nations like the Netherlands, disaster management forms part of the duties of the military. The military in Ghana has over the years shown leadership and competence. State agencies like NADMO, Town and Country Planning, Water Resources Commission, etc. should be led by qualified technocrats.

There should be synergy and coordinated networks between them. MMDCEs should enforce sanitation by-laws. The Ghana Association of Engineers should be consulted in the issuance of building permits. MMDCEs should stop building open drains. Drains in the city should be covered and re-engineered to widen them.

Six die in accident at Hemang after car crashed into wrongly...
47 minutes ago