Thoughts Of A Nima Boy: A Conversation With Professor Wole Soyinka 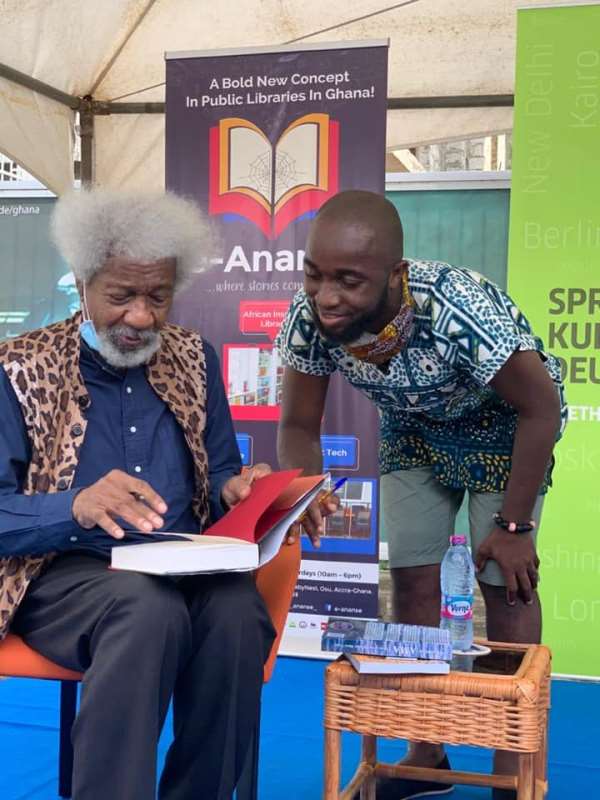 Admiring the sea at the Goree’ Island in Senegal somewhere in September 2016, a conversation ensued as regards the status of Chinua Achebe and Prof. Wole Soyinka in Africa. A lot was said about these two; albeit I cannot recall all that was discussed. One thing that still lingers or rings a bell is the statement made by Abdul Rashid Sambo, the Personal Assistant to the Deputy Minister in charge of National Security.

He opined that, unlike Chinua Achebe whose works were known and could easily be cited by school children in Junior High School, Wole Soyinka’s works were not on that tangent. It is seldom to find a University student in Ghana acquainted with the works of this great mind. It is (in the words of Sambo) “for the high class.”

My voyage in reading had made me unearth writings that sought to juxtapose these two. Haplessly, I wrote them off as Africans doing what they do best, “the duopolization of things” thus, repeatedly comparing things and people. Faintly do you find Africans treat one in his or her writings and class without the mention of others. The reason I partly wrote it off was of two things. Primarily, his in last literary salute to the world, There was a country: A Personal History of Biafra, Chinua Achebe, described as “remarkable” a group of young men and women from all over Nigeria who started the University College, Ibadan together. He made mention of people like Chike Momah, Theophilus Adeleke Akinyele, Elechi Amadi, Wole Soyinka, J.P. Clark et al. Again, for Chinua at Seventy, Wole Soyinka wrote a very long poem titled ‘Elegy for a Nation’. In it, he scribbled,

“Chinua, I think with you I dare

Be indelicate-we scrape our feet upon

The threshold of moral proof, denying

The ancestors yet awhile our companionship –

May that day learn patience from afar!-

On the stage of Bard, behind the lectern,

Gazing across time to your staunch spirit

Wedded to a contraption we neither make nor men

My irreverent thoughts were –There sits the nation,

All faculties intact, but wheelchair bound.

Your lesson of the will, alas, a creative valour

Marks the gulf between you and that land

We claim our own.”

Conversely, the aforementioned got nothing to do with what I want to talk about. As far as there is no law that criminalizes digression, I would like to narrate the conversation we had with the Nobel Laureate, Professor Wole Soyinka on Saturday, 26th September, at the Goethe Institute, Cantonments. An event organized by the e-Ananse Library and ably supported by Writer’s Project of Ghana, Vidya Bookstore, UNESCO, etc. as a Book Chat to discuss his book A Season of Anomy: Covid-19 and the Creative Muse. The audience was made up of seasoned writers, a cross-section of the public and representatives from Pan-African Writers Association, UNESCO and other reputable organizations.

Interestingly, it turned out to be a platform where participants had to learn intriguing and captivating things about Wole Soyinka. Something that was phenomenal as alluded to by Abdul Rashid Sambo. The conversation was spear-headed by the venerated writer and editor whose books are dotted around all respected bookshops in the country, Ivor Agyeman-Duah and he made known very pertinent issues from the good old Professor.

He commenced by reminding the Professor that “we live in a new world order and at 86, having had his exile years, survived cancer, had many problems with leadership in Africa, how does Covid-19 compare to what he lived through”? Without mincing words, Wole Soyinka stated that he disagreed with the ‘new world order, and the expression “new normal” he described it as “one of those convenient expressions that reminds us that we have to make certain adjustments.” Further, he explained that “the world is a history of pandemics. There is nothing extraordinary about what happened. We are not out of Ebola yet. There’s SARS still around. HIV took its toll.” He believed that, it is just one pandemic out of a plethora of pandemics. Notwithstanding, “humanity has a will to survive.” However, he was quick to add “it’s a miracle that we’ve had this low comparatively speaking level of casualties as a result of COVID-19.” He lamented what he termed “herd panic in leadership” which left him a bit disappointed. Our leaders are imitating what happened in other places “without reflecting on the very special sociological realities of our society which are very different from others.” This influenced a lot of measures taken by leaders to manage the pandemic situation which had not been effective and efficient. He figured that governments should have left the local governments to decide how far they would want to go and reach efficiently on a decentralized footing. The professor mentioned that “you have no competence to come from Abuja and impose restrictions on my state.” He opined that this made the public go overboard and could not observe common-sensical restrictions. An interesting view it was from the Professor.

When asked how his travels were affected, everyone got astounded when he mentioned he hates to travel. When he was younger he moved from one workshop to one conference to another event which was imperative in diverse parts of the world. But travelling according to him “has become a pain in the neck over the years; thanks largely to these irredentists, salvationists of the world who think it’s alright to blow up a plane just for whatever reason.” He narrated how he quarantined in his hometown; Abeokuta with his laptop and a few bottles of wine. He commended the Health department of Nigeria for that efficiency of calling him every day of his quarantine at exactly 12:o’clock to check up on his wellness.

Ivor Agyeman-Duah continued to probe. He revealed how the productivity of Wole Soyinka had increased. Nonetheless, his producer unraveled that the professor has got a novel coming up after many years. He is also engaged in the intervention series; a collection of essays. In December, he is co-directing his most famous play “Death and the King’s Horseman” in Lagos; which made J.P Clark states he could not pin point the esprit de corps of the professor. And that he worked as someone who is now gunning for the Nobel Prize. “Where does your energy come from?’ Ivor quizzed. The Professor then said he was guilty of all those charges and gave a litany of travels and places he was in the five months lockdown. He ended on very serious note by saying “I’m suicidal. Until I work myself out to death, I won’t be satisfied.”

The conversation touched on the social challenges that existed in Africa in 1975 when Wole wrote his second novel and how social transformation was confronted. It discussed how we can overcome the challenges of our time. The professor believed methods must change since we live in a dynamic world. He also lambasted those he termed “follow follow intellectuals who he thinks swallowed textbooks hook, line and sinker “without any attempt to relate those principles to the material actualities of their own society”. The Professor wrote A Season of Anomy “as an opportunity to extract from social mores some ideas that could be propelled to the transformation of society in a contemporary situation”. He recounted the fact that those years were not easy years as they had to contest “ideological rigidity”, fighting his own colleagues who had this “sort of monolithic mentality which led to monstrosities where human beings were reduced to statistics”. He also explained how the intellectuals of his time had issues with post-colonial reactionary Heads of state like the Mobutus etc.

A lot of critics also believed that their group of writers were arrogant and classified themselves as Renaissance men. The Professor concurred and added that they saw themselves as ideological agents of change, as the vanguard of the liberation, Pan-Africanism (certainly not the rhetorical but participatory one). He announced that they were contempt to leave the formulation of the post-independent African society in the hands of the politicians. He related how they met with the first generation of nationalists, debated them and interacted with them on the issue of post-colonial constitutions of Africans when they were in the university. However, he realized that most of these leaders just wanted to take the place of the Whiteman and not to change the conditions and situations of the people.

The latter part of the conversation made the Professor reveal how art was useful when he was least occupied, how he grew up in a traditional setting, a musical family, how he used to take artworks for granted until he saw them “being pilfered by expatriates, looted (and looting itself was part and parcel of the degradation of the African society, part of the colonial imperial adventure and unequal relations)”, so he had to do something before all artworks are taken. Adversely, he found our culture being denigrated, insulted by our own people in a rise of religious fundamentalism. He hinted that there was “a multiplicity of motivations” coupled with his basic love for being around artworks and they being around him. A disease, an obsession and a possessive kind of mentality.” It became.

A lot were discussed; which this piece cannot capture in its entirety. One outstanding issue was my realization of his connection to the legendary Fela Anikulapo Kuti and how he remembers him in very simple terms. Fela was his cousin. According to him, it was fascinating to watch Fela’s transformation. He recounted how Fela accompanied him in his first outing and played on the saxophone yet never showed any slight interest in the poetry laden with deep political lyrics because they never meant anything to him. Fela’s music at that time was purely social music. The Professor expressed an exclamation of surprise that after travelling to the United States of America and met a woman, Fela got his mind turned completely, his views and music turned around completely and he came back preaching Pan-Africanism, African politics, colonialism and other heavy issues deep in his songs. “Women are dangerous”, he said jokingly. I took great delight in that aspect of the conversation because I had read in Fela’s biography Fela: This Bitch of a Life how the woman, Sandra Smith worked on Fela. He wrote “Sandra gave me the education I wanted to know. She was the one who opened my eyes. I swear, man! She’s the one who spoke to me about Africa. For the first time, I heard things I’d never heard before about Africa…. She talked to me about politics, history... She blew my mind really…” She gave him a copy of The Autobiography of Malcolm X which blew his thoughts.

It is worth noting that, it was a great discussion. It was very impactful and revealing; when the chance came for book signing, I walked over to the great professor and told him “Sir, I do not have your book now. I will get it later but I have a book here written by Ivor Agyeman-Duah and I badly need your signature.” The Professor smiled and said, because it is not my book, you will get a very short signature.”

NB: The Writer is the Executive Secretary of Success Book Club and a Youth- Activist.