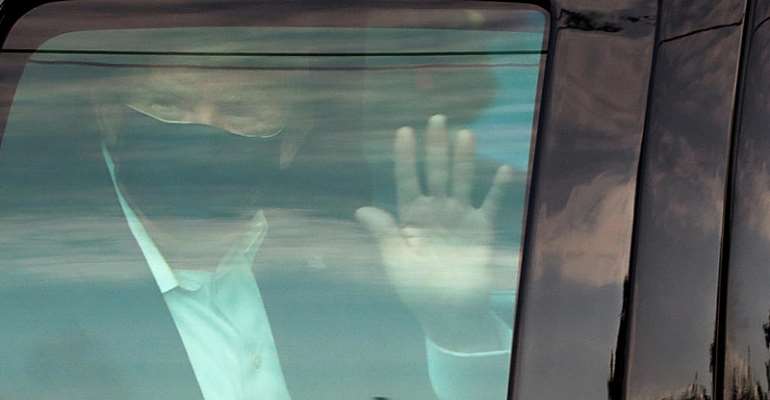 As uncertainty continues over the health of US President Donald Trump, his positive test for Covid-19 has further divided Republicans and Democrats less than 30 days to go before the 3 November presidential election, with each side trying to spin Trump's illness to fit their own version of reality.

With less than a month to go before polling day, Americans remain in the dark about the real state of their president's health.

Donald Trump, who tested positive for the coronavirus on Friday, was seen at the weekend taking a drive to wave at cheering supporters outside the Walter Reed military hospital near Washington where he is being treated.

The move, criticised by experts, followed conflicting medical reports, varying from the president having made "unbelievable progress" to needing extra oxygen.

Trump, who posted a video on Twitter just before his surprise drive-past, said he had "learned a lot about Covid".

For Randy Yaloz, the president of Republicans Abroad in France, Trump's experience with the virus could help him narrow the gap with Democrat rival Joe Biden in the polls.

Covid hero
"I think that people are going to appreciate that he went out and met the American people," he told RFI by phone hours after Trump tested positive for Covid-19.

Trump has repeatedly been rebuked for flouting public health advice, while at the same time mocking the "frailty" of his Democrat challenger Joe Biden for wearing a protective mask.

"Democrats have been sending me jokes saying, 'do they think it is a communication scam that he's got the Covid,' because they know it's gonna improve his ratings if he comes out ahead," continues Yaloz.

For the Republican camp, Trump "took some risk, a calculated risk," but it paid off.

Not everyone sees it that way however.
A majority of Americans think Trump could have avoided infection if he had taken the virus a little more seriously, according to a Reuters/Ipsos poll released on Sunday.

For Zachary Miller, the former vice chair of Democrats Abroad in France, Biden has cut a figure of calm amid the chaos of Trump's presidency.

White House cluster
"Not only because Biden took a cautious response toward himself but because Biden has emphasised that 'it's not about you, it's about the people around you: your mother, your brother, your sister, your kids, the people that you have to make contact with: the bus driver, the people sitting next to you,'" he told RFI by phone on Monday.

Biden's strong performance during last week's presidential debate, where he spoke to the camera, directly to the American people, has given him a ten point lead with his Republican challenger.

"I think people are seeing now that the preferred response was to be overprotective, than to be so loose with it (Covid), Miller added.

Controversy has been mounting after reports that Trump attended a fundraising event in Bedminster, New Jersey, even after learning that his personal aide Hope Hicks had the virus -- and just hours before he announced his own positive test.

The 30 donors are now said to be panicked after being around the commander in chief hours before he announced that he was infected.

Fears of a White House cluster were also confirmed on Monday after Trump's press secretary Kayleigh McEnany tested positive, joining his wife Melania and a growing list of Republicans.

From day one, "there has been no kind of national coordination," reckons Miller. "This administration has always been sending mixed signals: 'You should do this, but I'm not going to do this'. It was a cowardly way of leading because he didn't want to be wrong."

Under scrutiny
Whether Trump's health will have a bearing on his quest for reelection remains uncertain.

But doctors not involved in treating him for Covid-19 have said the fact that the 74-year-old has been taking dexamethasone - a generic steroid widely used in other diseases to reduce inflammation - is evidence his case is more severe than his doctors are willing to let on.

For Scott Lucas, a professor of American studies at the University of Birmingham in the UK, Trump's illness has further polarised Republicans and Democrats in one of the most turbulent and unpredictable US election for decades. It has also cast a harsh spotlight on his handling of the pandemic:

"The Trump camp did not want the last month of this campaign to be about coronavirus, that's why they tried to push it to the side with the Supreme Court nomination of Amy Coney Barrett," he tells RFI of the conservative judge whom critics say was chosen for her religious views.

"So what the Trump camp will do is to try and make it a personal story. Assuming that he will recover they will try to make it about this valiant man who defeated coronavirus almost on his own, that the country has turned a corner."

Personality politics
However, with the US reporting 42,600 new cases and 700 deaths on average each day, compared with 35,000 cases and 800 deaths in mid-September, this narrow view may be difficult to sustain.

"The Democrats will make this a wider focus. Let's remember that even if Trump survives coronavirus, 210,000 Americans did not. So we hope he recovers. But this is about the American people and about the fact that Trump's case highlights his denial and his mismanagement of the crisis for nine months," he said.

Trump's condition has further sharpened the focus of this presidential election on his personality, with the US leader eager to show he's in charge, despite his sickness.

Whether it will be enough to convince voters on 3 November that he is the man for the job is almost as unpredictable as his health.