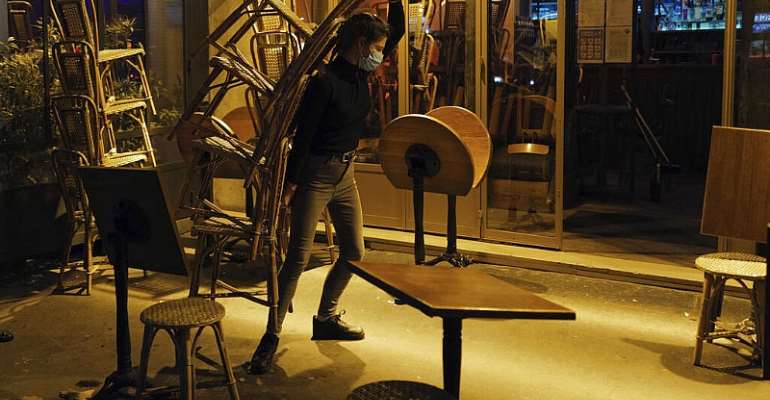 Paris officials announced Monday bars would close for two weeks after the French capital was placed on the country's highest Covid-19 alert level. Restaurants and universities were allowed to remain open with reduced capacity.

Bars will be closed for at least two weeks as part of new restrictions announced Tuesday as hospitals anticipate an influx of serious Covid-19 cases, though restaurants would be allowed to stay upon under certain conditions.

Officials said the new restrictions would remain in place for at least two weeks.

“These are slowing-down measures, because the epidemic is moving too quickly,” Paris police chief Didier Lallement told reporters. “We have to slow it down before the health system is overwhelmed.”

The French government placed Paris and its close suburbs on the country's maximum Covid-19 alert level on Sunday, after to the region passed the threshold of 250 cases per 100,000 inhabitants.

Regional health agency ARS said it expected 50 percent of intensive care beds to be occupied by Covid-19 patients within two weeks, up from 36 percent at the moment.

“It's an increase that is accelerating from one week to the next,” said ARS director general Aurélien Rousseau, who added that there were "3 500 new cases each day, with "203 active clusters" in the Paris region.

"40 percent of the clusters originated in schools and universities, while 26 percent started in professional contexts," he said.

Restaurants must adapt
Under the new rules, closures apply to establishments whose status defines serving alcohol as a primary activity, thus applying to bars as well as many cafés and brasseries.

Restaurants and any establishment with another primary activity can remain open if they adhere to new health measures that were expected later in the day.

Restaurants already hit hard by about three months of shutdown in late winter and late spring, and a lighter tourist season in the summer, were desparate to find ways to stay open.

Industry groups on Sunday proposed measures including greatly reduced capacity, payment at tables, no more than eight people per table and even noting addresses of customers to allow contact tracing.

Critics question coherence of measures
Representatives said they were relieved that some exceptions were being made for restaurants but expressed disappointment and questioned the rationale when it came to the bar closures.

“We proposed a simple critera based on health protocols: if a bar can respect health rules, seating customers a metre apart with limits on numbers and payments at tables, then it can open. If it cannot or does not wish to, it must close,” said Didier Chenet, president of industry group GNI.

“It's the sole legitimate criteria from a health point of view, the simplest and the most coherent for managers and the easiest for public officials to verify.”

The Paris region was the second in mainland France to be put on the maximum alert level, one week after the area around Marseille and Aix-en-Provence, where all bars and restaurants have been closed for a week.

The new rules on limited restaurant openings will allow some establishments to open in those cities, as well.

Swimming pools closed to adults
Other measures include limiting access to large shopping centres by ensuring at least four square metres per person.

Pubilc gatherings of more than 10 people were forbidden in public places, with exceptions for demonstrations, funerals, markets, guided visits or food distribution services.

Swimming pools would be closed for adults but remain open for minors. Gyms and sport clubs were already closed in an initial set of new measures one week ago. Outdoor stadiums and other facilities would remain open, with limits to capacity.

Visits to care homes for the elderly would be permitted if organised in advance during certain hours, and limited to two people.