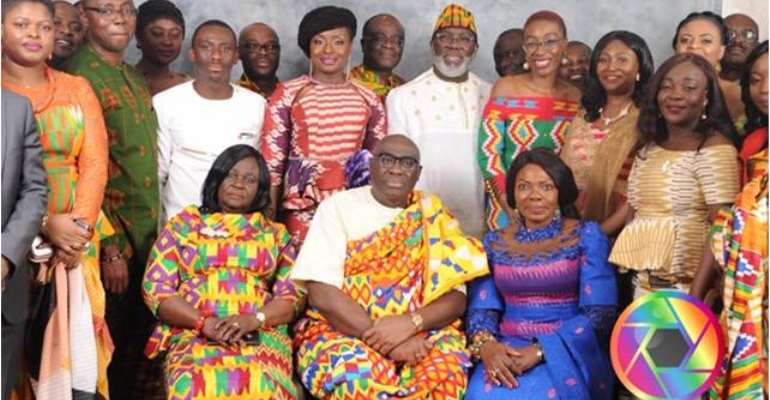 Ghana’s High Commissioner to the United Kingdom and Ireland, Papa Owusu Ankomah returns to the country on Saturday September 26 after nearly four years of service in that country as Ghana’s envoy.

A note from his office said Mr, Owusu Ankomah has duly informed the diplomatic community in the UK of his departure and was officially bid farewell by members of the community.

“Owing to the COVID-19 pandemic, he granted audience to most of the diplomatic corps virtually. The Marshal of the Diplomatic Corps, Alistair Harrison CMG CVO, called on His Excellency Owusu-Ankomah to bid him farewell and used the opportunity to present to the High Commissioner a parting gift from the Queen, which was a picture of the Queen and Prince Philip, the Duke of Edinburgh.”

The Marshal of the Diplomatic Corps, Alistair Harrison (presenting a parting gift from Her Majesty Queen Elizabeth) and His Excellency Papa Owusu-Ankomah.

Papa Owusu-Ankomah also called on the Minister for Africa of the United Kingdom, Mr. James Dundridge, who represented the Secretary of State for Foreign, Commonwealth and Development Affairs, Rt. Hon. Dominic Raab.

Minister James Duddridge recalled the excellent relations that exist between Ghana and the U.K. which most recently, had enjoyed further boost due to the effective and prominent role that the High Commissioner played during his tenure.

The Minister recalled the participation of the President of Ghana at the Commonwealth Heads of Government Meeting (CHOGM), and the UK-Africa Summit both held in London in April 2018 and January 2020, respectively and expressed profound gratitude to the High Commissioner for institutionalising his good works based on a rich experience which had led to uncountable highlights of his stay in the U.K.

The Minister for Africa, Mr. James Dundridge, to Adam Afriyie

MP & Trade envoy for Ghana, Commonwealth and Development Office, and the High Commissioner together with the Head of Chancery, Mrs Matilda A. Osei-Agyeman during the farewell meeting.

Other persons Papa Owusu Ankomah engaged are the Secretary -General for the Commonwealth family, Rt.Hon. Patricia Scotland, the Secretary-General of the International Maritime Organisation, Mr. Kitack Lim, the Dean of the Diplomatic Corps, His Excellency Khaled Abdulaziz Al-Duwaisan GCVO, and the Dean of the African Diplomatic Corps, Hie Excellency Estifanos Habtemariam Ghebreyesus.

Papa Owusu-Ankomah, is proceeding on leave prior to the end of his duty tour on 30th November, 2020.