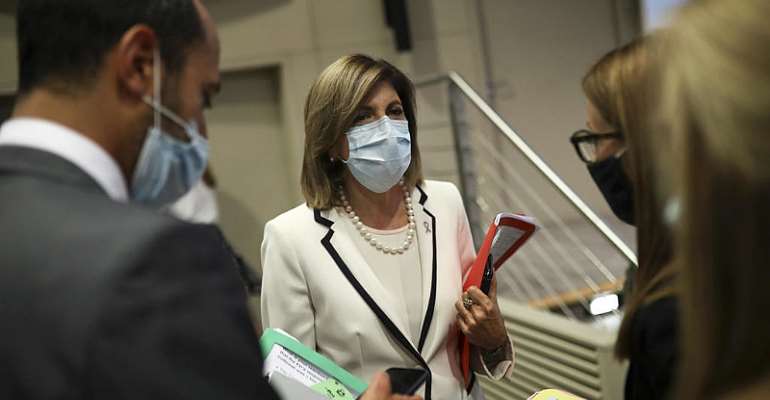 The European Commission's health spokeswoman has called on EU members states to communicate better and enforce social distancing and hygiene rules to halt a new wave of coronavirus infections. The appeal comes as several countries, including France and Spain, announced tougher restrictions to curb the Covid-19 spread.

"In some member states, the situation is now even worse than during the peak in March. This is a real cause for concern," EU health commissioner Stella Kyriakides said on Thursday.

"All member states need to roll out measures immediately and at the right time at the very first sign of potential new outbreaks."

Europe has now had more than five million coronavirus cases, and several countries have begun reimposing local lockdown rules to head off a return to uncontrolled spread.

The death rate has not returned to the levels seen earlier this year, but cases of new infections are soaring once again in many areas.

In France -- more than 13,000 new cases and almost 800 hospital admissions were reported on Thursday alone, prompting the French Health Minister Olivier Veran to order the closure of bars and restaurants in the southern port city of Marseille, now labelled as on "maximum alert" along with the overseas territory of Guadeloupe.

On the second highest "elevated alert", eight major cities including Paris will see new restrictions, including limitations on public gatherings to 10 people and earlier closing hours for bars.

As a result, Munich -- Germany's third-largest city -- has made face masks compulsory in some busy outdoor spaces and is considering a targeted alcohol ban.

Germany also this week added a slew of popular destinations, including Copenhagen, Dublin and the United Arab Emirates, to its list of foreign locations that require travellers to self-isolate or get tested when returning to Germany.

Kyriakides, whose office has sought to coordinate the response across the 27 member states, warned that some areas had clearly begun to lift restrictions too soon.

Crisis is not over

"What this means, to be very clear, is that the control measures taken have simply not being effective enough or not being enforced or followed as they should have been," she said.

"We cannot lower our guard. This crisis is not behind us. Moreover, winter is the time of the year for more respiratory illnesses, including seasonal influenza."

"Today we're here to call on everyone to act decisively... it might be our last chance to prevent a repeat of last spring," she warned.

Kyriakides also said that member state governments would have to fight misinformation about the virus and reach out to young people to head off protests and conspiracy theories.

And she warned they will have to act quickly to prevent a need for a return to generalised lockdowns, which she said would hurt the economy, education and the mental health of the public.