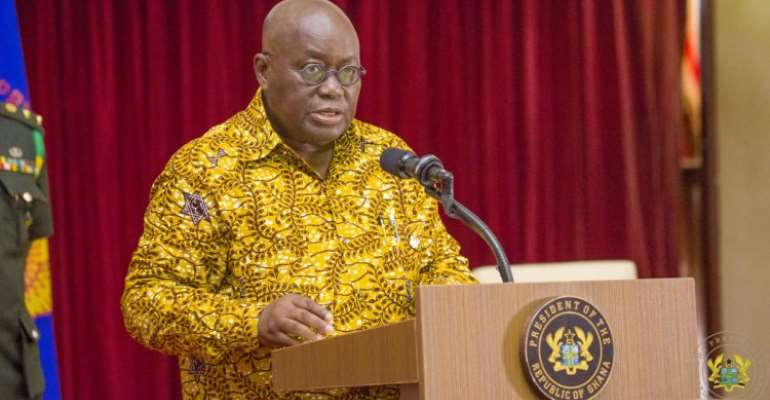 President Akufo-Addo may not win praise from the opposition National Democratic Congress (NDC) for his handling of COVID-19 but the numbers of reduced cases coupled with the progressive easing of COVID-19 restrictions are undeniably remarkable.

In the wake of the pandemic the President pledged he would be the last person to put the lives of students in harm's way. He could see the silver lining but his opponents could see gloom. Unperturbed, he'd defy the critics's apocalyptic pronouncement and send over half a million final year JHS and SHS students back to school. On the 5th and 18th September senior high school and Junior high school students wrote their exams respectively.

"I pledged I will not be the last person to put the lives of students at risk," said Akufo-Addo.

And the pledge yielded good results, one can say that for now. Can you imagine if things had gone wrong?

Can you imagine if the students had continued to stay at home?

Truth be told, it could have been worse if government had not held the bull by the horn. So pretend you haven't seen all the efforts put in place by the government to flatten the curb.. And pretend you cannot be bothered by these sea change and progressive easing of COVID-19 restrictions by this administration.

Would you prefer to be in the shoes of some countries that have seen waves in COVID-19 cases and are now imposing lockdown while others have imposed curfews? I guess not.

Statistics
Three weeks ago, the number of recorded active cases, that is persons with the virus, stood at one thousand, eight hundred and forty-seven (1,847), President Akufo-Addo said this when he addressed the nation on Sunday evening, his 17th since the outbreak of the pandemic.

This number, as at Friday, 18th September 2020, has reduced considerably to five hundred and seven (507) persons.

According to Mr. Akufo-Addo there are, currently, some regions in the country without active cases. Greater Accra, Eastern, Ashanti and Central Regions account for some eighty percent (80%) of the active cases.

As at Friday, 18th September 2020, the total number of tests conducted is four hundred and seventy thousand, seven hundred and thirty (470,730).

"So far, a total of forty-five thousand, two hundred and fifty-eight (45,258) persons have recovered, and two hundred and ninety-seven (297) persons, a great majority of them with underlying illnesses, such as hypertension, diabetes, chronic liver disease and asthma, have sadly died," he said.

So why has the president not announced a complete return to normalcy?

If the statistics are that good what's stopping him?

Listen to the President's reaction: "Yes, our death rate continues to be low, and our hospitals have, mercifully, not been overwhelmed, as there are, presently, only twenty (20) severe and critical cases. Indeed, there are a lot of empty beds in our treatment centres, and the isolation centres have virtually no patients under care."

"We cannot afford, at this critical moment, to throw caution to the wind, and destroy the incredible amount of work undertaken by Government, health officials, heroic frontline health workers, and members of the security agencies, in bringing us this far," Mr. Akufo-Addo cautioned.

Now more than ever, we must be even more disciplined in our adherence to personal hygiene, mask-wearing, and social distancing measures that have become part of our daily routines. That is the way to eliminate the virus altogether. The experience in other parts of the world show us that the virus can return with a vengeance, once you let your guard down.

Mr. Akufo-Addo also had something to say about the reopening of Ghana's international airport-- Kotoka International Airport, (which took effect on September 1). He pointed out, that signalined the country's gradual reintegration with the rest of the world.

According to hiim 16 out of the t23 airlines that operated in Kotoka prior to its closure have, again, commenced flights to and from Accra.

Testing at the airport
A total of ten thousand and sixty-one (10,061) passengers have been tested at Kotoka as at Saturday, President announced. In spite of the requirement that all passengers must be in possession of a negative PCR test result upon their arrival in Ghana, a test which should have been conducted not more than seventy-two (72) hours before the scheduled departure from the country of origin, a total of twenty-six (26) positive cases have been recorded from the tests at KIA.

So, imagine what would have happened if these twenty-six (26) positives had not been detected, and had been allowed to mingle with the population.

Mr. Akufo-Addo believes that even though the cost of one hundred and fifty United States dollars (US$150) per passenger, for the mandatory airport COVID test, has been criticised in certain quarters, the value of the test in its speed, accuracy, and savings for passengers, who no longer have to bear the cost of the 14-day mandatory quarantine in hotels, has been clearly established.

"It is worth noting that a lot of people, who've experienced at first hand the service being offered at our international airport, have praised the country for the innovation and farsightedness on display at our airport. Let me assure you again that, as President of the Republic, I will do everything in my power to protect you and stop the importation of the virus into our country, or limit and contain its spread. This is my solemn commitment to you," he gave the assurance.

"I am particularly excited at this development because, despite the fears and genuine anxiety expressed by some, and the criticisms proffered by some in the political space, these students have gone to school, studied, sat and completed their examinations unscathed. Their forward march in life has not been interrupted. And, by the grace of God, the predictions made by some of widespread infections and even deaths did not materialise."

I pledged I will be the last person to put the lives of students at risk, and I express my deep appreciation to all parents and guardians for the trust reposed in me and Government. I pray for the success of the students in their exams."

Also, relevant arrangements and logistical deployments are underway for the return to school of second year Junior and Senior High School students. Continuing students in the University of Cape Coast, the University of Health and Allied Sciences, Technical Universities, and some other Colleges have returned to school, and I have been reliably informed that adherence to protocols is high. Long may it continue.

Masks wearing
On Monday, 14th September, the President extended, by Executive Instrument, the mandatory wearing of face masks by another three (3) months. So, until 14th December 2020, the wearing of masks remains mandatory, and the law enforcement agencies will be required to ensure this directive is respected by all. It has served us well in the fight against COVID-19, so I urge each and every one of us to wear our masks, and do so correctly anytime we leave our homes. It is the new normal requirement of our daily existence until the virus disappears.

Meanwhile government has taken the decision to allow the resumption of training in all contact sports, taking into consideration the imminent participation of our national teams in international competitions. Indeed, some national teams have already been given the dispensation to begin training, ahead of their international engagements. All sports people, who are camped, are to be tested regularly.

"With respect to football, after due consultations with the Ghana Football Association, it has been decided that the Ghana Premier League and the Division One Football League will restart on Friday, 30th October, with a full regime of testing of the players, technical and management staff. No spectators will be allowed at the training centres, and, when actual competition resumes, seating at all stadia will be limited to twenty-five percent (25%) capacity to ensure social distancing. Wearing of masks by spectators at stadia will be mandatory. The restart of all other sporting competitions will be determined on a case-by-case basis, pending consultations between the Ministry of Youth and Sports and the respective sport associations," the President announced.

Seized rosewood to be used for National Cathedral constructi...
37 minutes ago

Anti-LGBTQ bill gazetted, to be laid for first reading on Mo...
42 minutes ago