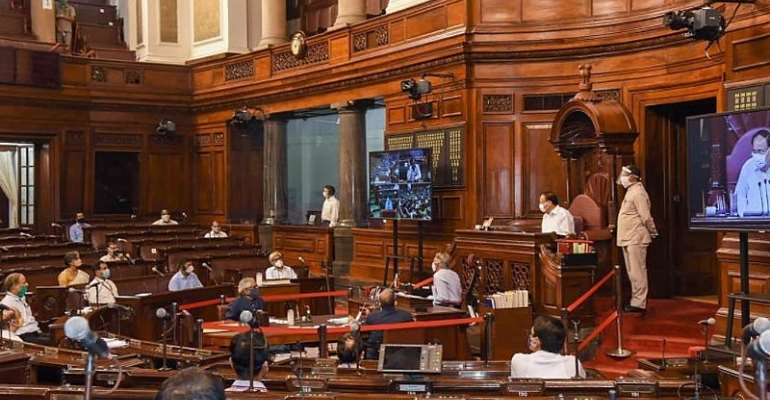 An 18-day monsoon session of India's parliament has gotten underway with extraordinary safety measures to protect against the coronavirus, including staggered sittings of both Houses and social distancing between MPs.

With 200 of the 785 members of parliament over 65 years of age, and at least seven ministers and two dozen lawmakers recovering from Covid-19 infection, the pandemic has cast a shadow over the session, which takes place after the end of the monsoon season.

The session, which usually starts in mid-July, had to be deferred due to the pandemic, which enforced a sweeping federal lockdown from 25 March.

When proceedings began on Monday, the sitting was adjourned for an hour to mark the demise of former president Pranab Mukherjee.

Parliament meets against a background of escalating tensions along the Line of Actual Control, where Indian and Chinese troops have clashed along the Himalayan border. And everything is overshadowed by the government's measures to counter the raging coronavirus pandemic.

In his traditional comments before the session, Prime Minister Narendra Modi delivered a strong message on the China border stand-off.

"We hope parliament and all members will unitedly send the message that the nation stands with our soldiers," Modi said.

According to parliamentary officials, the session is expected to be short but will be supported by unprecedented logistics and infrastructure arrangements.

“Attendance of parliamentarians will be recorded through a mobile app. There will be fibre-glass sheets separating their seats, and those in the visitors' gallery,” said Lower House Speaker, Om Birla.

Instead of the regular Question Hour, only written questions and answers will be allowed in a move which has hugely upset Opposition MPs.

“Question Hour is the golden hour but you say that it can't be held due to the circumstances. You conduct the proceedings but single out Question Hour. You are trying to strangulate the democracy," said Congress MP Adhir Ranjan Chowdhury.

The session, with four-hour sittings for each House in shifts, including weekends, will see the government line up 11 ordinances, which were cleared during the lockdown. The government is also expected to table nearly 45 Bills in both Houses for approval.

Ahead of the session, all members were requested to get themselves tested for Covid-19 and one of them tested positive.

Home Minister Amit Shah continues to be under observation at Delhi's prestigious All India Institute of Medical Sciences after he tested positive for the virus.

Congress president Sonia Gandhi will not attend the first part of parliament's monsoon session as she has left the national capital for the US for her annual check-up.