Where Is Ghana Going? 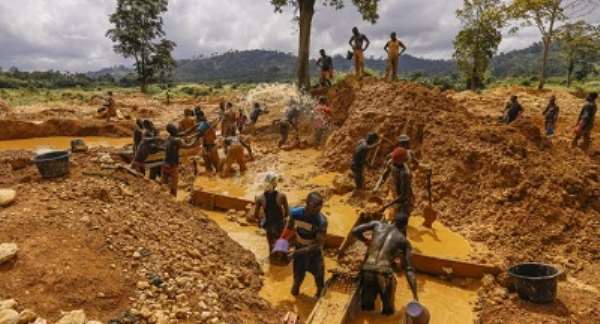 In many countries, certain political issues are isolated and almost universally supported, because they are in the “national interest” .

Right now, anti-terrorism measures, for instance, are widely supported throughout the world by all parties that believe in the rule of law, because they are in the “national interest.”

You see, terrorist activity can kill anyone, irrespective of what is in his or head head – by way of political

inclination – and that’s why the fight against such activity receives so much support.

I am convinced that Ghana is now in a situation in which, if we don’t really sit up, define our national interests and

fight tooth and nail to safeguard them, we shall destroy the country that Providence so kindly endowed to us.

We are so blessed that, in years past, our country was so viable economically, that some of our parents were able to hire nationals of our neighbouring countries to come and work for us. Without them, Ghana would never have become , at one stage, the world’s leading producer of cocoa.

Some of these foreign workers inter-married with our people and many of us went to school with boyhood friends who bore names like Amusa, Tafah, Raimi and Agbonyor.

I was so distressed when I learnt that some of these friends were being forced to leave Ghana in 1969 that I went to the office of the Prime Minister, Dr K A Busia and protested to him on their behalf. I published the interview with Dr Busia in the Daily Graphic of 17 January 1970.

If our country was so attractive that it could entice people to live and create communities here, then it had something which other countries did not have, didn’t it? It appears that we have lost our discerning ability and no longer

appreciate our blessed status, even though we travel around the world more frequently than before.

So we are deliberating destroying the country – through galamsey.

realised that the 2020 presidential candidate of the main opposition National Democratic Congress (NDC),

Mr John Dramani Mahama, had decided to make a party political issue of it.

One report quoted him as having stated that he would “not hound” people engaged in galamsey but would “organize them and regularize their activities under guardian laws.”

This is almost word for word, a repetition of what Mr Mahama said in 2014, when he was President:

QUOTE: President Mahama … condemned the use of brutal force against operators of illegal mining. He said

… at Dunkwa-on-Offin, in the Central Region, that he is not happy when the police and military chase out young illegal miners, who are into the business to make a living. UNQUOTE

speaking from both sides of his mouth at the same time. …On the one hand, the President was left disappointed with the extent of damage done to the environment by galamsey activities.” But on the other hand, the President condemned the use of ‘brutal force’ against [the galamsey] operators. UNQUOTE

Since 2014, the damage galamsey has done to our rivers and farmlands has multiplied exponentially. Yet in a speech he made in Kumasi whilst introducing his running mate, Prof. Jane Naana Opoku Agyemang, to the Asantehene, Otumfuor Osei Tutu ll, he is reported to have said that this time, if he wins the December presidential elections, he will not abuse

illegal miners with soldiers again, but will organize all such miners into cooperatives.

QUOTE: “Nana, we will monitor and ensure that small-scale mining is done well to save the environment, while

opening the gate for a lot of job opportunities for our youth in the mining sector,” (the former President said in

Twi. He added) “….We don’t have to abuse people with soldiers because they want to fend for their families. We only need laws to regulate that kind of mining in the country, because when we do that well, it will create wealth for our youth.” UNQUOTE

The question is, where has Mr Mahama been in the past two years? Was he not in this country when the NPP

Government placed a ban on small-scale mining? Did he not notice that the NPP Government later lifted the ban

and introduced the issuing of licences to small-scale miners to mine concessions granted to them?

Is Mr Mahama really not aware that the Government, at its own expense, took small-scale miners in groups to the

University of Mining at Tarkwa, to train them on mining techniques that do not ravage our water-bodies and

activities of licensed small-scale miners with drones; to install trackers on all licensed excavators so that if they

veer from legitimate activities, such as building roads, into galamsey, the owners could be caught and brought to

book? Does Mr Mahama think that the steps specified by the Government in its GALAMSTOP programme are inadequate? If so, why is that happening and how can those measures be improved? What is the use of reintroducing measures that have not worked under a previous administration? Isn't it more practical to find out why the meusures have not worked and take action to make them work?

us to have elections before we can tackle it. Galamsey is marching inexorably forward and will force us to import our

very drinking water if we use the excuse of “party-politicking” to play with the issue.

We need ONE PLAN, which all political parties can agree upon RIGHT NOW and support – “in the national interest”.

Otherwise the galamsey operators will unite, pass through our divided lines (from all sides of the political spectrum!) and finish the country for us. Money knows no political colours, does it? And we all know that galamsey IS money.

some of the very officials charged with implementing the programme to stop galamsey.

“As for the galamsey it is not only the youth who are doing it. MCEs, DCEs, Ministers are involved…Even some of you (chiefs) are involved. Indeed, the activity generates lots of money… [But] galamsey money is evil so let us all come together to

By speaking thus, the President could be said by his own NPP side to have “laid himself and the NPP open to criticism for having exposed the fact that some NPP officials are engaged in galamsey. Indeed, the opposition could also jump in and criticise the President for being unable to discipline those he says are “involved in galamsey.”

in the national interest. It’s an example of quality leadership that faces facts, and it is up to all other leaders in

the country – be they political party leaders; religious or social leaders or, indeed, youth leaders (its, the youth, after all, who will inherit the country) to rally round and make sure that we all, without exception, support the campaign

against galamsey. We have so far failed miserably, as a Nation, to implement practicable measures against galamsey and left the field almost entirely to the moneybags.

We must change our attitude drastically.

It is a national duty.

JHS graduate appeals for $45,000 to undergo kidney surgery
9 minutes ago

$50million gathered so far for the National Cathedral projec...
53 minutes ago