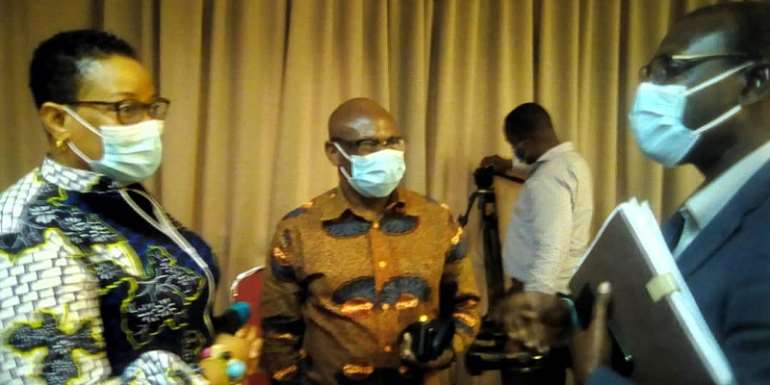 As part of the effort to deepen democracy and enhance good governance, STAR-Ghana Foundation in collaboration with Ghana Integrity Initiative (GII) and Elections Community of Practice and Learning (ECOPL) has held the National Dialogue on Reforming Political Campaign Financing in Accra.

The dialogue follows three zonal discussions of the national campaign financed dialogue series held at Tamale, Kumasi and Takoradi aimed at engaging citizens and key stakeholders to discuss and deliberate on campaign finance reforms to help safeguard the country’s democracy.

In an address, the Executive Director of STAR-Ghana Foundation, Alhaji Ibrahim – Tanko Amidu commended political parties for their contributions towards the successful take off of the dialogue series noting that the event will help step up the country’s democracy.

He said political campaign financing is a challenge and must be well addressed with the needed reforms to enable government to come up with a clear cut road map towards effective good governance and nation building.

According to him, STAR-Ghana has put in place comprehensive steps in supporting numerous electoral activities across the country geared towards the socio-economic growth of the country and building the capacity of political parties and civil society organizations in their bid to regulate and monitor political activities.

Alhaji Ibrahim-Tanko Amidu said STAR-Ghana is working fervently to engage corporate bodies to institute a national fund to support governmental programmes in order not to rely solely on donor support throughout its operations.

Dr. Esther Ofei Aboagye, the Governing Council Chair of STAR Ghana Foundation said the practice of political party financing is deeply entrenched and however urged parties to have their accounts audited as part of the reforms to bring sanity in excessive spending.

According to her, public office holders can fall short and comprise in the event of giving out funds in their quest to stay in office or those who are yet to occupy office.

In a presentation on the topic, Democracy and Political Finance in Ghana Today – Facts, Challenges and Best Practices, Prof. Kwasi Prempeh, Executive Director of CDD – Ghana outlined that the practice of political financing have direct impact on corruption since the candidate will recoup the money spent on activities while in office, adding that it also brings to the fore money laundering and electoral violence and chaos over sharing of money by party faithfuls and sympathizers.

He said the practice also leads to women being relegated to the background since they do not have the nerve to engage in such illegal activities in the move to occupy public office and again called for swift reforms in party financing.

Prof. Kwasi Prempeh advised government and stakeholders in the political space to put in place automated mechanisms to track the source of funds as well as the financiers to scrutinize the transparency of such monies.

In a panel discussion, christened “How the Status Quo Hurts the People and our Democracy – The case for Urgent Reforms”, panellists called for swift reforms in campaign finances and called on key stakeholders in the political arena to engage government on enforcement of laws governing campaign financing and advocate for its implementation.

Ms. Josephine Nkrumah Chairperson of National Commission for Civic Education (NCCE) said laws must be enforced to stop the illegal financing of political campaigns and called for reforms in that regard adding that if it is well addressed development partners will not dictate to the governance of the country.