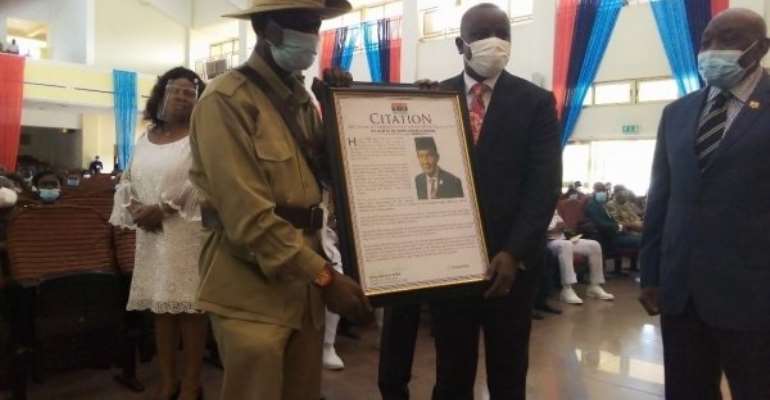 Ghana on Monday promoted war veteran and ex-serviceman, Private Joseph Ashitey Hammond, to the rank of Warrant Officer Class One (WO1), for his patriotic exploits and continuous service to the nation.

The honour was conferred on him by President Nana Addo Dankwa Akufo-Addo, Commander-in-Chief of the Ghana Armed Forces, on July 20 this year, following his recent humanitarian efforts.

The war veteran, 95, in June this year, embarked on a two-kilometre walk a day for seven days to raise funds to support COVID-19 frontline workers and vulnerable veterans.

This earned him the “Commonwealth Points of Light Award” from the British Queen, an award he is yet to receive at an official ceremony at the British High Commission in Accra.

At a ceremony to officially confer the State Honour on Private (Pte) Ashitey Hammond, Mr Dominic Nitiwul, the Minister of Defence, described as exemplary the activities of the ex-serviceman over the years.

He said Pte Ashitey Hammond, even as a retiree, continued to contribute to the development of the country.

“In contemporary times, this gallant veteran has been an Ambassador for Veterans Association of Ghana, touring some schools in the Accra Metropolis to educate students and pupils on not just Ghana's history, but the virtues of patriotism,” Mr Nitiwul said.

It was in view of these exceptional contributions and sacrifices of the war veteran that the President and Commander-in-Chief of the Ghana Armed Forces, Nana Akufo-Addo, deemed it right and appropriate to confer on him the Honourary Rank of Warrant Officer Class One, he said.

“It is my hope and belief that this will motivate and encourage others to strive and emulate his achievements.”

Ex-Pte Ashitey, 95, was a Second World War veteran and was among a group of ex-servicemen who marched to the Osu Castle on February 28, 1948, to present a petition to the then Governor of the Gold Coast.

This led to the shooting and the death of three servicemen; Sergeant Adjetey, Corporal Attipoe and Private Odartey.

Mr Nitiwul said even though the welfare of veterans had improved over the past three years, government was committed to ensuring that their welfare, particularly ex-officers, improved further in the coming years.

He commended the Military High Command and the Veterans Association of Ghana (VAG) for their selfless service to the nation.

Lieutenant General Obed Boamah Akwa, the Chief of the Defence Staff, described the work of the ex-serviceman as exceptional and worth emulating.

He added that honours and awards were means of recognising service of outstanding officers beyond the normal demand of duty.

He said the honour would, therefore, boost the morale of serving officers, adding; “It is hoped that the current generation of Ghanaians will continue to work hard to change the country for the better whether they are in or out of uniform.”

Major General Clayton Yaache, the Board Chair of VAG, expressed profound gratitude to the President, the Minister of Defence, and the Chief of the Defence Staff for the unique honour not only to the recipient but to all veterans.

He appealed to them to continue to recognise and appreciate veterans for their past service and contribution to the state to encourage young officers to give off their best.

WO1 Ashitey Hammond, on his part, expressed appreciation to the President, the Military High Command, and VAG for making this a reality.

He assured the state of his continuous service in any capacity for the betterment of the country and the continent at large.

He further urged Ghanaians to adopt the spirit of patriotism and work to enhance the image of the country globally.

Takoradi 'azaaa' woman still in custody as she fails to meet...
6 minutes ago