The Hurdles Ahead Of Election 2020 For The Opposition NDC 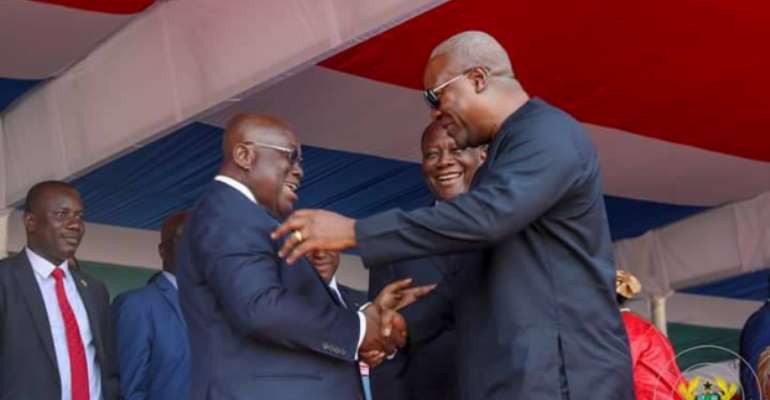 There is an adage that, "he who laughs best laughs last", but that is what the National Democratic Congress NDC found itself now dangling in opposition. NDC and its members now have to endure the hassles of opposition. In the east while, John Mahama and his NDC were the superintendents of this great nation Ghana. They were ubiquitous in this country with succulent but superficial bywords. I surmised they were blinded by power and failed to realise that most Ghanaians were unsated with their style of governance and so they constantly make sardonic statements, especially against the then opposition NPP. Yet Ghanaians surreptitiously were wearisome of their governance even though many of the government officials continue to mesmerized Ghanaians with their mellifluous speeches just to thrill the citizens without considering the possibility of being denigrated into opposition. Unfortunately for the NDC, the rapture of election 2016 caught up with them.

Immediately after the 2016 elections, the future were looking too elephantine and gloomy for the NDC because of the daunting task ahead of 2018 primaries and the 2020 general elections, especially should the NPP manage to live to expectation of many Ghanaians by successfully fulfilling their rather glamorous promises made during the 2016 electioneering campaigns. There were three important things that the NDC faced: reorganization of the party especially at the grassroots, selecting an enamoured presidential and vice presidential candidate, and adopting a scintillating penchant and dulcet campaign strategy that can culminate into political renaissance in the NDC.

Firstly, NDC needed to reorganize itself from the grassroots as a formidable party to reckon with. In the run-up to the 2016 elections, the grassroots of the party were shambles and it's members and sympathizers disgruntled with the top leadership of the party. Most grassroots supporters were embittered with party executives especially government appointees. During the four year reign of the Mahama led NDC, most appointees were ineffective and some were arrogant. For instance, there were ministers and MMDCEs whom when questioned about projects or monies spent, will either refuse to answer or at best say, "yen abayn ne woso", meaning ' our government is in power' and walk away arrogantly. This attitude of the Mahama appointees was not approved by the party grassroots in particular and Ghanaians at large. Yet, the top leadership of the party nor government top executives take any action to address that. It was that reason, the founder J. J. Rawlings said the NDC lost the 2016 elections mainly because of arrogance of government officials. However, as at mow, things are stable for the NDC and it looks like the distress and lamentations of the grassroots have been jilted through a genius panacea of the new leadership. It also looks like, the NDC is leaving no stone unturned and refused to accept and adopt any jejune petulant or pugnacious strategy. Hence, the party is succeeding in reigniting a strong interest and likeness for the party at the grassroots.

The second issue that NDC battled with was selecting a presidential material for the ticket to the party towards elections 2020. There were two options: Maintaining former President John Mahama and campaign on the principle of sankofa or bring in a fresh winnable candidate to change the fortune of the party come 2020. Either of the options will be a laborious task. Already, a Mahama on the ticket will still mean that the governing NPP can take advantage of the perception the succeeded in labelling against Mahama ahead of the 2016 such as corruption allegations, incompetence, dum so dumb so, and mismanagement. Before the 2018 primaries, NDC needed to avoid any least mistake that will plunge the party in continues opposition. What was likely to make the NDC primaries and the 2020 elections more clunky but exciting was whether John Mahama as an individual was going to throw in the towel and consider his duty as a former head of state or he was going to fight the disparaging perceptions labelled against him by gallantry recapturing power in both primaries and general elections in 2020. No matter the decision, John Mahama had several records in his name: massive infrastructure covering energy, water, education, health, agric, roads, electricity, and many more. We are living to see the saying that, "great warriors who lose at war lives to fight another day" come to pass. Indeed, John Mahama is a great warrior. He fought and won at the 2018 NDC primaries and he is fighting hard to recapture power come December 7, 2020. What NDC currently need is a strong united force behind the former President and it seems that is already happening. Another powerful advantage of the NDC is the running mate. A strong bold courageous genius hardworking smart goal-getter and a powerful speaker in the person of Prof. Naana Jane Oppoku-Agyemang is available to champion the course of the running mate and the first female vice presidential candidate for the two major political parties in Ghana.

Probably, the most important matter for the NDC was drafting a campaign message. It is true that NDC did not present a convincing message to Ghanaians in the 2016 elections and that affected the party. More disadvantaging to NDC was when the then opposition NPP promised everything free: free education, free health care, one district one factory, one constituency one million dollars, and many other succulent messages. Whether they were capable of fulfilling them or not, they were sure Ghanaians like free things, so let's promise them angels and heaven, That worked perfectly against the ruling NDC in the 2016 elections. Just in the near past, it was very hard to think of what probable massage NDC will present to persuade Ghanaians to vote in their favour. What I was sure of was that NDC is blessed with astute human resources in respective fields of life and who were capable of meticulously designing and adopting a campaign message that is appealing to the electorate. Just that the NDC needed a message that will be penchant lucid and lavishing enough to be accentuated in the minds of Ghanaians. NDC needed to be reminded that any quark and perfidious campaign strategy will only saw the party perpetuated in adversity.

As it is left few months to election 2020, the NDC seemed to have found its feet. They have successfully reorganized the party, had selected both their flag bearer and running mate, appointed their campaign team, completed their manifesto and are gearing into the elections. Despite the Coronavirus pandemic that disrupted every sector of the world, the NDC is taking advantage of every green light to reach to Ghanaians. They have remain humble to a large extent, focused on issue based campaigning, and reaching out to Ghanaians with their manifesto promises including the THE BIG PUSH agenda. They are also taking advantage of the mistakes of the ruling NDC and preaching to Ghanaians to vote NPP out of power. So far so good for the NDC party.

For now, the ruling NPP are working hard to meet their campaign promises made in 2016 and are equally asking Ghanaians to give them 4more years. Yes! NPP have fully role out the free SHS promised and are working on others, but Ghanaians are the best judges come December 7, 2020. My only advice to the NPP is, let not NPP take Ghanaians for fools and must be cautious of what they do and say, for what happens to NDC in 2016 will be less. They will receive the public uproar and eventually kicked out of office. NPP will have no excuse should they thread on the path of lies and propaganda, for Ghanaians will leave no opportunity to ask for proper accountability.

Finally, whether NDC or NPP, Ghanaians are now maturely decerning and no political party can come and play political gymnastics without receiving the wrath of the public verbally and ballot wise. There is no consideration for any party if it failed to deliver on the right mandate of the people. Any party that play foolishly with the lives of Ghanaians will be met with total hoity-toity and absolute rejection. However, now that NDC is off side in terms of governance, will they be out minds in the upcoming elections? My candid advice to all political parties is that they must look before they leap, and let not the NPP be quick in judgement but be reminded that every dog has its day.

Your MMDCE list plagued by inequalities entrenched in the du...
39 minutes ago