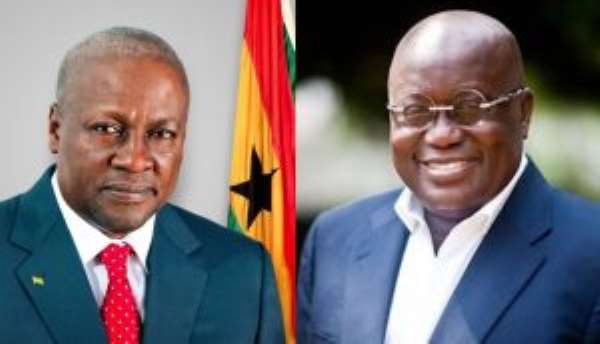 The COVID-19 cases in Ghana keep increasing daily. Amidst the threat and danger of being infected, Ghanaians will queue in their numbers at various polling stations for the eighth time in the fourth republic to elect a president; the first gentleman of the land. All the vast resources of the nation will be entrusted into his hands as a steward to manage them for the ultimate good of Ghanaians.

Some people believe elections in Ghana is not about choosing between the good and the bad, rather, it is choosing between two bad as both political parties are essentially the same. It is a choice between the devil and the deep blue sea, two sides of the same coin. We just have to critically compare and contrast to choose the lesser evil. However, our nation needs a leader, a president must be elected and our 1992 constitution demands we vote to elect one no matter how bad the options may be. We have to elect a president, it is a must.

This article is not to influence readers or suggest who readers should cast their votes for, neither does it also seek to give answers to the various issues raised, readers are to give the answers themselves. The writer only seeks to bring to the minds of voters some pertinent issues. These issues are key determinants for thinking minds to consider in choosing who wields power at the Jubilee house for the next four years when they go to the polls on December 7, 2020.

Again, choosing the two leaders of the main political parties for comparative analysis is not to undermine the electoral chances of the other political parties but it was based on their records from the previous elections (those who had at least 5% of valid votes).

For the first time in the history of our republic, we are going to have the presidential candidates for the two main political parties having served at the highest office as president. Both of them have had the opportunity to serve for four years as president and we all know what they can do if given the mandate. This is the only time that the main opposition presidential candidate has himself been president before.

Based on the above, election 2020 will not be determined by just promises and assurances, though it is imperative. It is not about who out-promises the other. Much as their vision for the country is important, equally important is a thorough assessment of what they did with the first four years we gave them. It is clear that none was able to fulfil all their promises while in office but we can still do a proper analysis based on whatever they did during their tenure.

How well the four years were utilized can inform us whether to entrust the nation into their hands for the next four years. In the Holy Bible, the 25th chapter of the gospel according to Matthew, when the master came back from his journey in the parable of the talents, he asked his servant to give account of what they had done with what was given them before saying; "well done good and faithful servant". He then gave big responsibility (greater opportunity) to those who utilized the first opportunity well and didn't give the bad steward another chance. Before a second opportunity is given, there must be a proper account of the first.

Hence, it is only fair that we ask President Akufo-Addo and Former President Mahama what they did with the first four years that merit another four years. The Akans say “when a person who has chewed a crab says he can chew calabash, you don't challenge him”.

Below are but few key sectors for comparison:

During former president Mahama's four years as president, what significant changes did you see in the education sector in terms of accessibility, quality, infrastructure expansion, examination results, enrollments, educational policies and management, interventions, teacher recruitment and the holistic welfare of teachers from basic school through SHS to tertiary? Was the education sector as a whole better under former president Mahama than it is now?

Same goes for president Akufo-Addo; what significant changes have you seen in the education sector in terms of accessibility, quality, infrastructure expansion, examination results, enrollments, educational policies and management, interventions, teacher recruitment and the holistic welfare of teachers from basic school through SHS to tertiary? Is the education sector as a whole better under president Akufo-Addo than it was before?

What changes did former president Mahama bring to the health sector? was there an improvement in the condition of health workers? Was infrastructure (building of hospitals, health centers etc.) increased under Mahama's government? How was Mahama's effort to provide accessible health care and also recruitment into health training institutions. Was the overall assessment of the healthcare system, the NHIS better during former president Mahama's time than it is now?

What changes has president Akufo-Addo brought to the health sector? Have we seen an improvement in the condition of health workers? Has there been an increase in infrastructure (building of hospitals, health centers etc.) in Akufo-Addo’s tenure? How has Akufo-Addo fared in providing accessible healthcare and how is recruitment into health training institutions? Are we having an overall better healthcare system, NHIS under president Akufo-Addo than previously

Did we see employment and job creation increase when John Mahama was president? Were there massive recruitment into the various sectors i.e. police, military, education, health etc.? Was employment opportunities and job creation higher during former president Mahama's time? Did former president Mahama practically implement policies that addressed the age old issue of youth unemployment when in office as president? How was the unemployment situation and chances of getting a job like under Mahama's government?

Have we seen an increase in employment and job creation during President Akufo-Addo’s tenure? Has there been massive recruitment into the various sectors i.e. police, military, education, health etc.? Has employment opportunities and job creation gone up as Akufo-Addo became president? Has president Akufo-Addo practically implemented policies that seek to address the age old issue of youth unemployment as president? How is the unemployment situation and chances of getting a job like under Nana Addo’s government?

Who among the two has done more in providing employment for the teeming graduates?

Roads and Other Infrastructure (Projects)

Other essentials to compare are; provision of water, electricity expansion and security or safety of citizens.

Finally, the most important person to consider in deciding who to vote for is you. How was your life’s situation from 2012 to 2016 and how is your life situation from 2016 to 2020? Which one is better? Who has helped your finances to improve? your business to expand? Whose administration has helped you live a relatively fulfilling and decent life as a citizen of Ghana?

It is important that the above critical issues which affect every citizen and are core to the progress of our nation are analysed devoid of sentiments, tribalism, unfounded assertions and insults. By this we will be informed to make a better choice for now and posterity.

GJA to elect executives on October 3 in Bono East, Bono and ...
27 minutes ago