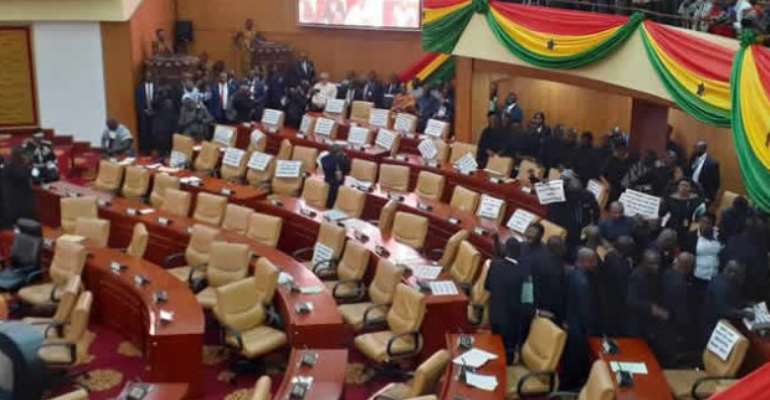 However, the vote was boycotted by the minority National Democratic Congress (NDC)

They said the assignment agreement would be entered into between the fund and Agyapa, pursuant to which the fund would assign to Agyapa its right to receive the royalty value due from ARG under the Investment Agreement for the acquisition of the allotted mineral royalties from the fund, in consideration for shares to be issued by Agyapa to the fund at an agreed price of US$1 billion.

The NDC minority in Parliament boycotted the vote after failing to block approval, leaving behind only members of the ruling New Patriotic Party (NPP) to ratify it.

“We will not be part of the process to endorse this deal which is illegal and will not serve the national interest,” Deputy Minority Leader, James Klutse Avedzi, said as his side continued banging tables amidst yelling.

But the majority side discounted the claims of the minority counterpart and said the transaction was only unique but also a cutting-edge transaction which was first in Africa and would reduce Ghana's borrowing requirement which helped domestic private sector borrowing.

The NPP MP for Sekondi, Andrew Kofi Egyapa Mercer, argued on the Floor that the agreements were a good deal; approximately US$500 to US$750 million of permanent non-debt capital could be raised from international and domestic investors.

According to him, the transaction will also reduce the country's budgetary exposure to mineral royalty revenues due to fluctuations in minerals prices and mine output.

The country often obtains funding to execute its development mandate from debt capital markets, subject to terms and conditions, including the obligation to repay the principal borrowed with interest thereon.

The government said it is seeking to diversify the country's capital portfolio, by obtaining long-term capital without repayment obligations, through equity capital market transactions.

According to the Finance Ministry, a transaction structure has been developed for raising equity capital that involves leveraging Ghana’s future gold receivables.

It said that notwithstanding, these revenues were substantial, with the country receiving approximately US$120 million in royalties from gold mine operators in 2017.

The Minerals Income Investment Fund Act, 2018 (Act 978) was passed in 2018 and had since been amended by Parliament to enable SPVs created under the Act to operate as regular commercial companies on sound corporate governance principles.

Section 41 of the MIIF Act enables the fund to, subject to parliamentary ratification, enter into an allocation agreement with an SPV to assign the nation's mineral equity interests to that SPV.

Section 40 of the MIIF Act also empowers the Minister of Finance to, subject to parliamentary ratification, enter into a stability agreement with the fund and an SPV to grant fiscal and legislative stability to that SPV.

In accordance with the provisions of the Act 978, the President has appointed persons to the governing board of the fund and authorized them to put into operation the objectives of the MIIF Act. Pursuant to this, the fund has incorporated Agyapa Royalties Limited under the laws of the Bailiwick of Jersey. The fund is the sole shareholder of Agyapa.

Chairman of the Finance Committee, Dr. Mark Assibey Yeboah, indicated that Agyapa had been registered in Ghana as an external company and had also incorporated ARG Royalties Ghana Limited as its wholly owned subsidiary in Ghana.